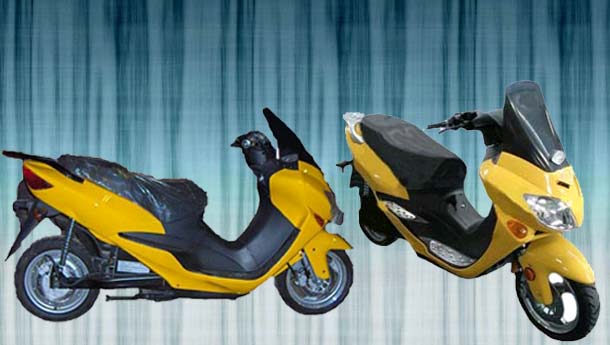 Don’t even ask us about the photograph. That’s all they have on the product website. If you produce what could possibly be the world’s fastest street legal production electric scooter, the least you could do is take some decent photographs of the same. We tried jazzing it up by putting in a fancy background but as you can see, it sorta...kinda…din’t really work. The folks at electric bike manufacturer ZEV have put on sale what they claim is the world’s fastest street legal production electric scooter – the ZEV7000. And they’re backing it up with a challenge. ‘Zev has had it with all of the claims by various companies that they have the fastest street legal production bike around. We tell them to bring their street legal production bike and to bring their betting money. There can be only one “fastest” street legal production electric motor scooter or bike in the world’ is what they say. Strong words indeed. The last time I heard of words like these was in a shaky Youtube drag racing clip. We later found out that all they were fighting over were ‘pink slips’.   Anyways, it has 8 kW of peak power, will run upto 113 kph+ in the ‘Power mode’ and have an operating range of 88-112 kph depending upon various factors. And then, they have a number of lines on their website dedicated to how their scoot is cheaper while being faster and having more range than the competition. It’s DOT-approved, assembled in the US of A, has regenerative braking and will come with a 2-year warranty.   Having one of these fast scoots in India would definitely be massive fun. Quite unlike the vanilla ones we have here. But then, the vanilla ones are easier on the wallet. Try Rs.40,000 for the Vanilla scoop vs Rs. 4,02,100 (US price converted) for the Double Chocolate Fudge Sundae.