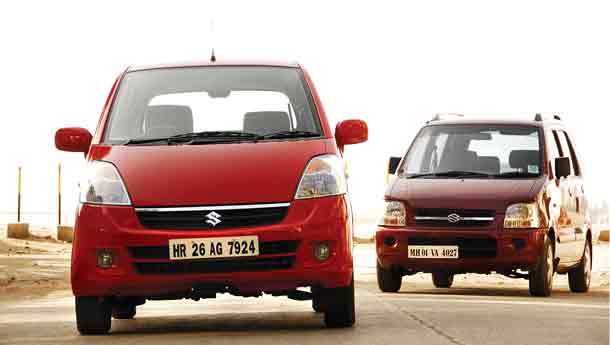 If we go by the Which Car? questions that we keep getting, it looks like the Maruti Suzuki Wagon R has competition from its own stablemate, the new Zen Estilo. I can perfectly understand the emotions of car buyers across the country. They have Rs 4 to 4.5 lakh to spend on a car and have decided against the Hyundai Santro for reasons ranging from looks to Shahrukh. Essentially these are captive buyers for the Maruti-Suzuki combine. As in, they were driving the Maruti 800 in their past life or are first time buyers who want a slightly bigger Maruti as their first car. And what happens when they land up at a dealership is amazing – they get confused. Let me explain.

I walked into a Maruti showroom in the Mumbai suburbs and I was offered two cars – the not-so-cheerful salesman told me to buy the Wagon R, but led me to the Zen Estilo. ‘This is new Gen, sir, very good pick-up, everything from Wagon R only,’ he said. But would he recommend one? ‘No problem if you don’t like Gen sir, Wagon R price is very similar.’ He was in no mood to help matters. My agenda was to choose a car for a relative who wanted a new car and of course, maximum bang for the buck. I picked up some brochures and headed back home and decided to file this story.

Actually the wise men at Maruti Udyog’s marketing department like the situation – people choosing between Suzuki models. I had a long chat with Mayank Pareek, marketing head at MUL, and he told me that while it looks rosy, selling far too many cars in a not-so-elastic price range is tricky. ‘It has worked for us, but we had to work to make it happen,’ he said. So then, the idea is to dominate the grey matter inside prospective buyers, right? Great if they get confused between two MUL models as long as they don’t end up buying a Santro, right? Hmm... time for the super motoring journalist to change into his underpants and cape and rescue the world then, what say?Before we get into dissection mode, let me tell you that both these cars are pretty clever devices. Especially if you intend to commute in one. While the Wagon R is the original tall boy, the MR Wagon nee the New Zen Estilo, was developed as an alternative with less boxy looks. Both are easy to drive and park and both are economical to a fault – and yes, they are as reliable as any modern refrigerator or television too. But continue reading if you want to choose one, because we will have one winner at the end of this story.

Looks
This is a classic case of quirky original vs cute impostor. And I personally would opt for the original here. The new Zen looks new age all right, but a tad too feminine for me to be walking into one everyday. Sure it is a very personal thing, still. There is something oh-so practical about the Wagon R and the recent facelift has not affected its status – that gory front grille not withstanding. While we are at it, let me say that general fit and exterior finish of these cars is pretty good.
Wagon R: ****
Zen Estilo: ***


Interior
Despite attempts at severe low cost manufacturing and localisation, the Wagon R continues to have an edge on the interior front thanks to superior overall design. On the contrary, the Zen Estilo interior looks as if it was made in a hurry to meet the Tokyo Motor Show deadline way back in 2002 – and got approved for production. While the Wagon R emphasises on practicality, the Zen Estilo has toy grade plastic written all over it. Sure, everything falls into place and you cannot argue on ergonomics terms – but then the car is so small, so everything better be within reach. The Wagon R interior may be tight but the Zen Estilo beats it when it comes to its ability to ensure physical proximity between driver and the passenger. I kept on apologising to a pretty lady who took a ride with me for accidentally (trust me) feeling up her thighs in my attempt to change gears. It becomes even more unfortunate when 99 per cent of the time you have hairy men rather than pretty ladies asking for a lift. Sigh. If you are going to use the rear seat to ferry three people, then the Wagon R is better off space-wise. The Estilo has a tall-set rear seat and you really don’t want to catch up on caustic gossip that happens at your ear level when you are trying to drive.
Wagon R: ****
Zen Estilo: **

Powertrain and performance
In India both are powered by the same engine and both offer very similar performance. Our road tests of the Zen proved that in a straight line it will compete well with the Wagon R. Standstill to 60 kph, the Zen is marginally quicker even (6.16 sec vs 6.35 sec), and the Wagon R has a hair-breadth’s lead when it comes to 100 kph (16.3 vs 16.26 sec). Both are peppy in the typically Japanese small car way and both run out of breath on highways. Overtaking continues to be a calculated affair in both cars but is not a worry once you get familiar with the ratios. Gearshift quality in both cars is not as desirable as it should be, with the Wagon R lever offering better feel than that of the Zen (no, the gear knob borrowed from the Swift does not help matters here). The Zen gear lever is so vague that I spent quality time deciding whether the car was in neutral or not before turning the key. Hey, Maruti, please look into this and ensure that the gear lever does not feel as if it is a primitive device to make ginger-garlic paste. Nothing a quality plastic socket and rubber lining cannot cure, I dare say.
Wagon R: ****
Zen Estilo: ***

Ride and handling
The Wagon R feels like a mini SUV on bad to terrible roads and can handle a great deal of abuse. The Zen Estilo offers an equally good ride on bad roads but it loses poise easily as speed increases. If you have to hit a series of potholes at close to three digit speeds and still end up laughing, then you better be driving the Wagon R. I get this feeling that Suzuki did over-engineer the Wagon R so as to compensate its overall tall stance. These are not cars you buy to attack corners in, but if cutting lanes is your thing, then they are very good at it. Both cars are nervous wrecks when you attempt high-speed cornering. I personally would root for the lower Zen Estilo to the taller Wagon R, but I have had a good time driving the Wagon R on mountain roads to not dismiss it easily. Let us put it this way, both these cars are way more capable handlers than what they look like.At Expressway speeds, the Wagon R, despite its boxy silhouette, is more stable and less susceptible to cross winds. The overall aerodynamics of the Zen Estilo is often found in conflict with cross-winds and is capable of moving the car a couple of lanes – so be careful. Also, I get this strong feeling that despite similar suspension mounting points in both cars, the Zen Estilo suffers from damping issues. Perhaps the rear springs and dampers are set far too soft for Expressway speeds.
Wagon R: ****
Zen Estilo: ***

Verdict
So there, no mistaking the fact that the Wagon R is the superior machine here. It rides and handles better than its sibling and has performance that is on par. As far as economy goes, the Zen Estilo returned 15 kpl on the combined driving cycle (metro, suburb, highway) on a regular basis while the best we got out of the Wagon R was 14 kpl. Not much to pick from, right? But there is a clincher to this story and that comes in the form of safety features. Both these cars are almost identically priced across the range with Rs 500 to Rs 10,000 worth of differences here and there. But let us concentrate on the Wagon R VXi and the Zen Estilo VXi – which come close to Rs 4.5 lakh on-road. Both these cars are available with ABS as an option, while you can opt for driver and passenger airbags on the Wagon R. The Zen Estilo can be ordered with only a driver’s side airbag. In short, if you don’t choose carefully, you will end up with a new car that costs more than the practical and safer choice. You don’t want to do that, right?