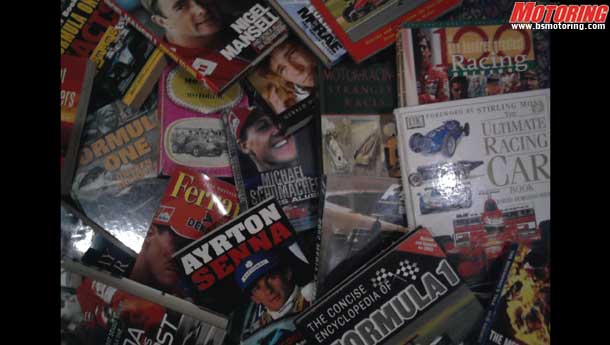 1. Your entire life is scheduled around the season calendar. You already know where you’ll be on the 30th of October 2011. And you pray, that by some stroke of luck, it won’t just be in front of the TV.

2. Given a pen and paper, you take to doodling F1 circuits – the real ones in preparation for the upcoming races, and imaginary ones for that day when you accidentally bump into Hermann Tilke and manage to slip ‘Michael Schumacher S’ and ‘Didier Pironi Hairpin’ into the conversation.

3. You think you're a de facto member of the team you support, and use the word ‘we’ in discussions related to F1. For example, ‘We’re the ones who’ll suffer the most with the ban on double-diffusers.’

4. You follow Friday practice sessions live online, all the while chatting with other F1 fans who are doing the same. You also type things like ‘How come the Ferraris are so slow?! WHAT IS IT?!’ to said friends, despite the fact that you know they're on the same webpage as you and probably don’t know why either.

5. Missing qualifying is sacrilege. It’s nearly as bad as missing out on the race itself. You need to watch an on-board lap of the track the day before the race. It makes you feel more prepared.

6. You have to watch the one-hour preview to the race, before the race itself starts. And of course, missing the post race interview is disrespectful to the drivers. They’ll feel bad, no?

7. Power-cuts/faulty cable transmission/not being near a television for a race has (accept it) happened to you, and you’ve relied on friends/parents keeping their telephone receivers next to their television sets so that you could listen to commentary at least.

8. If there is any sort of doubt in your mind about what exactly happened in a particular racing incident, you’ll stay awake till whatever hour to catch the repeat telecast in full. You don’t trust Youtube footage and are probably sceptical about anyone else’s opinion on the racing incident, even if they happen to be multiple-F1-race-winning-drivers-turned-presenters.

9. You know the best F1 footage is to be got from BBC. So, on the Monday morning after a race you’ll cabbage the required footage off the internet. If the connectivity gods fail, you’ll beg/borrow/steal footage from friends who do the same. Or cajole someone into downloading it for you. Money/prized possessions/kidneys might change hands.

10. In a top-secret location in your house, behind stacks of F1 posters, you have a scrapbook you maintained of Formula 1 news-clippings from a particular period of time. Actually, two of them.

11. You have been known to take notes during F1 races. How else are you going to throw lap times and statistics back at the mocking McLaren or Ferrari fan you’ll run into the next day?

12.  At some point in your life, you have grandly written all of your opinions about the sport to the editor of some fancy publication. It didn’t matter that you were 12 and hand-wrote all of it.

13.  When you meet a new Formula 1 fan, you are automatically suspicious. You tend to be dismissive, stern and somewhat curt until you gauge just how long he/she has been following the sport and how much he/she knows.

14.  When (and if) you saw photographs of a certain Indian F1 driver reading Autosport in a hammock when he was all of five, you fretted and fumed that your parents had given you Enid Blytons instead at that tender young age. The injustice!

15.  At some point or the other, if you’ve been watching F1 on ESPN Star, you have wanted an F1 car chassis to fall out of the sky and flatten a certain commentator who's  screaming ‘You couldn’t have written a script for this race’ even when it’s been the most predictable/processional race ever.

16.  A is for Ascari, B is for Brabham, C is for Chapman... and it goes all the way till Z for Zsolt. Baumgartner, of course!

17.  At some point in life, you dreamt of being an F1 driver yourself. But then, when reality hit, you settled for anything else that would keep you as close to the sport as possible, given your skill set.

This blogpost is dedicated to fellow Formula 1 fans – for you know and understand. Let’s have a good 2011 season, then.