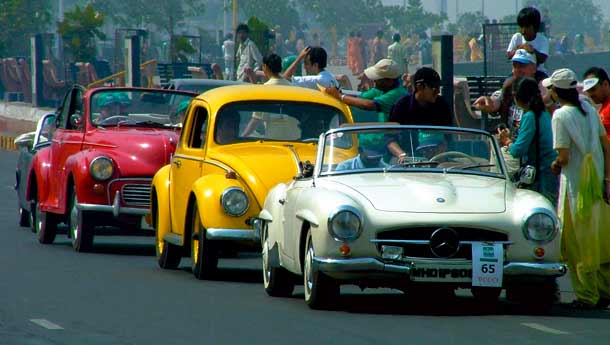 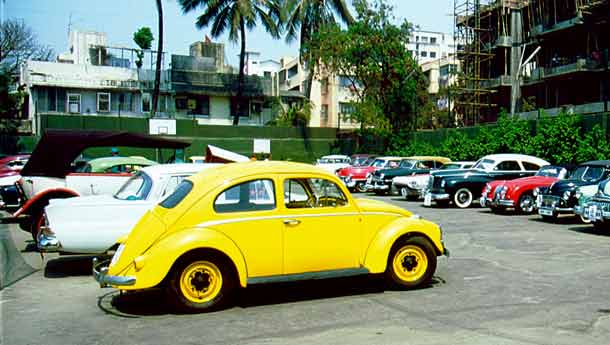 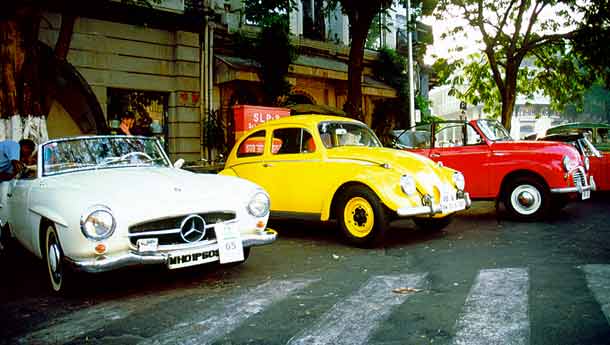 Heh, heh, heh,’ I gloated, ‘when these guys see my Beetle tomorrow, they’ll freak.’ I sauntered over to the area where the vintage and classic cars were being scrutinised and checked out all the cars that were assembled there. A priceless Rolls-Royce Phantom II with a dual-tone colour scheme and an amazing Gurney Nutting coachwork. A sporty Alfa Romeo 1750 lounging stylishly. A Humber Hawk, well-polished and gleaming in the evening sun. Classic American iron in the form of a Cadillac Golden Anniversary and Packard Clipper. Hmm, brilliant stuff, but we’ll see who’s the cynosure of all eyes at the Mumbai event of the Vintage & Classic Car Club of India.

That night, I could hardly sleep because of the excitement. For the first time, Miriam, my 1960 Volkswagen Beetle, was going to make a public appearance – and how! I was going to take part in a rally, something I have been thinking of for years. I paid my watchman what I normally pay him for the entire month to make her look chakachak. My navigator was to be Tushar Chemburkar, who takes care of my baby at his garage. He lavishes attention on her and in the initial days before restoring her, only he could start her up. The seeds of their romance were planted then, and little did I know how adulterous Miriam was until the day of the rally. That night, amidst all that tossing and turning, I dreamt how Miriam would beat all the others in performance in the classic category (cars between 1941 and 1960) including the Jaguar XK150S and the Mercedes 190 SL. And I even noted gallantly that I would mention how well the other contestants performed in my prize acceptance speech.

The day dawned, and Tushar and I left for the flag-off point at Kala Ghoda, near the Gateway of India. Miriam chugged merrily along the streets of Mumbai at that early Sunday hour and she seemed quite cheerful (was it Tushar...?). We were among the first participants to land up. I collected my competition number – 66 – and felt quite happy with it. This was going to be perfect – I wondered to whom I could give my camera to take my picture when I went to collect the prize. Eventually, other cars started trickling in, and a red Morris Minor convertible and a white 190 SL were parked either side of Miriam. Ha, basking in her glory, no doubt.

Eventually, we were flagged off. There were crowds lining up at the flag-off point and I made sure I waved and gave my best 64-teeth smile for the cameras. Some documents and biscuits were thrust inside the car, and off we went. Now, the problem was that it was the first time Tushar was seeing a tulip chart in his life, and the other problem was that, er, should I turn left or right? However, it didn’t take long for my navigator to get the hang of navigating, and in fact, later in the rally, I overruled his sense of direction, only to get lost. He was that good.   We dived in and out of lanes near the Gateway, and I must say, that initial drive was quite good. Himanshu Sinhji’s XK150S was just in front of me and Miriam was nosing around the Jag’s gorgeous posterior. Soon everything started going wrong. From that point onwards, we managed to get caught at every possible traffic signal all along the route – it was unbelievable, we must have stopped at what seemed like hundreds of red lights, so bloody irritating! Onwards then to Worli via Marine Drive, where I still kept doing my vote-for-me politician wave to passersby. Meanwhile other cars were passing me by. There goes that blue Beetle. Oh, there’s that green Minor. Whoops, that Austin 7 just overtook me!

The first time check (I suppose) was in Worli, and in a flurry of handshakes, signing of papers, exchanging of biscuits – yeah, whatever – we were on one of the few decently driveable stretches in Mumbai, Worli Seaface. Miriam was doing fine, and the chug-chug of her motor was reassuring. The gears were falling perfectly, the only crib was her brakes weren’t too good. One panic stop and she could lock her wheels up and throw the key into the Arabian Sea. So I was quite cagey about going fast.

At Prabhadevi, we saw other cars taking a right turn at a junction, while I thought we should proceed straight. Wrong decision. Suitably off the beaten track, we made it back somehow. Then at Dadar, I learnt my lesson and decided to follow the other cars instead. Wrong decision. All of us hovered around one another, scratching our collective heads and figuring out how to get back. I decided to pull my cellphone out and make a call to one of the organisers. Cheater! Later that night, when I went through the rules and regulations, I found out that it meant an immediate disqualification. But he was equally confused, because I was at a time check much earlier than humanly possible. But by then, I had figured out that there would be no thank-you speech at the prize-winning ceremony, no flashbulbs and posing along with the chief guest.


Back on the road to Bandra enroute Mahim, where there was supposed to be a stop for refreshments. On the way, I saw all the vintage cars returning on the opposite side of the road, which meant we were running quite late. Traffic was so bad, that it was like evening commuter traffic – the only difference being the sun blazing overhead and cooking me and Tushar inside like pate de foie gras, French for batata wada. The smart street urchins of Mumbai were thrusting their hands into the car and asking for the biscuits provided by the organisers. Oi! Go away, we need it at the time checks!   But before we reached the refreshment break, which was to be one of those coffee bars along Bandra’s seafacing Carter road, Miriam finally decided enough was enough. She just stopped. The heat got to her, and since most of the drive was in the thick of slow-moving traffic and red signals, the ignition coil had heated up. Other cars, and even bikes which were flagged off after us, were already driving back on the final stage. I rushed off to buy, believe it or not, chilled mineral water for her highness to cool her coil. Man, I bring my own bottle of water from home, but for this lady, nothing less than Bada Bisleri would do. Expensive tastes these women have. At least it was not Evian.

Finally, she chugged to life. We took a break, chomped and drank whatever the coffee bar offered us (nothing for you, go away, bad girl!). Then Tushar decided enough was enough. He felt that Miriam deserved a better man than I, sat behind the wheel and thrust the tulips on me. Now, I know my way around Mumbai, I don’t need no navigation chart to guide me. I threw them on the back seat, and we tried reaching our eventual destination, which was Chembur, leapfrogging other sections of the rally. Now you know why I didn’t require those tulips, right? However, Miriam reached boiling point (metaphorically speaking of course, for a Beetle can’t technically reach boiling point) in the Bandra traffic. She refused to start at the signal, not once, not twice but four times, until we decided to push her in the face of oncoming traffic. Because she is damn cute to look at, no motorist raised his fists in fury.

Another stop, and a water-soaked cloth massage again for her highness. This time Tushar somehow communicated to her to behave herself. I have never seen my Beetle move so fast, she just left all the other cars – read modern  cars – far behind. Tushar wove through traffic and we went careening around the road towards Chembur. My heart, in the meanwhile, was knocking at the back of my teeth. His explanation was that if she stops now, she’s not going to start again. And the only way she would not heat up is by maintaining an adequate level of rpm. Well, if you insist. It made me quite jealous, Tushar and Miriam’s intimacy. She heats up when I drive, but when Tushar’s behind the wheel, everything is fine.

Eventually Competitor No 66 made it to the final check and we parked next to all the 120-odd cars that were already resting after the trial, and their respective owners were happily gorging lunch – even after we skipped some sections. So much for me and my Beetle’s maiden vintage rally attempt. By the next year’s event, I promised myself I would make her rally-worthy and be there to collect the honours. But Tushar is definitely out.