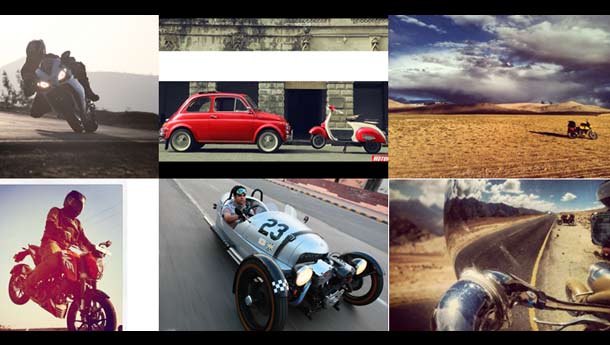 Much to everyone’s surprise, the world didn’t end in a giant spewing fireball on 21st of December. In fact, there was a better chance of the world sinking in its own fake, sensationalist and pageview-hungry bullcrap than it being torched by a supervolcano. But still, degradation of humanity will be the title for another blog. This time around, it’s all about the machines that made my 2012 brilliant. So, here goes...

Long story short: mind grenade. Alan Cathcart, no less, once called it ‘the finest production motorcycle on sale today’. Max Biaggi’s World Superbike winning baby isn’t to be messed with, because despite it being a veritable computer on wheels with anti-wheelie and launch control and what not, it will eat you alive before you know it. Endless torque from the V4, a muscle-car soundtrack, lusty Italian styling and this feeling of invincibility completes the RSV4. Of course, if you’re not Biaggi, you do get constant reminders that the motorcycle is way, way beyond your talent level.

For the sheer joy of motoring, this 3-Wheeler takes the cake. You can trace its roots back to the 1930s and though the materials and engineering have been brought up to today’s standards, it’s a motoring experience like none other. How else do you describe something with a massive 2.0-litre motorcycle V-Twin up-front, a single rear wheel at the back and an aluminum body that looks like a WWII combat aircraft’s tub? No matter how cynical you are while getting in, there’s no doubt that you’ll get out smiling and buzzing with adrenaline.

For the first time, a motorcycle came into the Indian market that didn’t try to please everyone and their grandmothers. This angry lil’ motorcycle filtered down the KTM riding experience down to a previously unexplored segment of the market, at least for KTM. The famous Austrian army knife was used to slice the thing into form and later, as a benchmark for handling as well. It’s got cutting-edge components that motorcycles twice the price still don’t have. Okay, the suspension does feel like it’s dosed up on viagra and the hot-headed motor does heat up in traffic. But forgive those two shortcomings and you have simply the maddest, most fun motorcycle on sale today, this side of the big league. Period. I’m so sure of it that I bought one for myself.

‘I have to. I have to. I have to been there!’ I told Srini as we finalized the shoot. ‘Okay, but I’m not saying no. You’ll have to be there - you’re the one shooting this story.’ came the reply from Srini, who was busy wanting to go home. And it was 11 AM. Still, joy o joy! For me, the original Fiat 500 is one of the greatest machines out there and the classic ‘70s Vespa is no less of a motoring icon. When the two came together on a lovely drizzling morning in Colaba, it seemed like it was meant to be. Red, swoopy, sexy, Italian, characterful, thoughtfully engineered - the two are just legendary. Trust BSM to do such a story.

My very own Apache RTR160

I’ve been proven guilty of ignoring my ol’ Apache RTR160 ever since the KTM has come into the garage. One day, though, I decided that enough is enough and that the 160’s upcoming fourth birthday should be epic. So, instead of hiring strippers and beer crates, even though the hit to the wallet was quite painful, I blessed the Apache with a lot of new kit, new bars and fantastic on-offroad tyres. 10 days later, the Apache found itself in one of the toughest regions of the world - the upper Himalayas and Ladakh - and despite there being a Duke 200, a Classic 500 Desert Storm and a Pulsar 220 in the group, the Apache kept up and performed brilliantly. I expected it to bog down with all the luggage weight or just completely give up on one of the monstrous passes but it didn’t. It celebrated its fourth birthday joyously thrumming along on the endless sand-logged rolling hills of the Changthang plateau in the frigid Himalayan winds. What a lil’ fighter it is!

Riding through remote Changthang plateau from Aneesh Shivanekar on Vimeo.