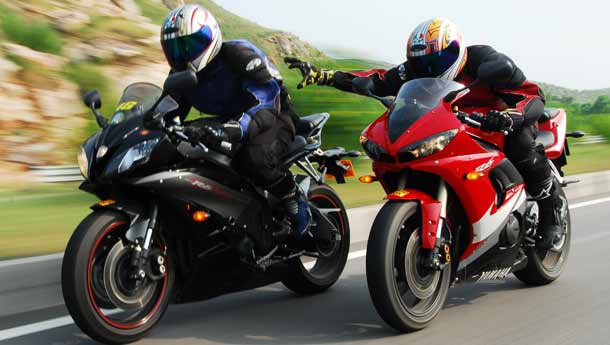 Seven years ago, I began my motorcycle career. I’ve spent all of those years preparing for this day. Today, I am on a deserted road in Rajasthan, surrounded by an angry gale, blurred bushes, mountains and perfect tarmac. A white needle is buried past 13,000 rpm and a white light shines in my face, urging me to change a gear. But I’m going to hold on to this one – Nandu’s just appeared in my peripheral vision and I can now hear his black R6 screaming a shrieking echo to my red R6S’. Today is my day and no one is gonna spoil it. Just before the R6S begins to bounce off the redline, I slip another shift in. Shreenand fades from my faceshield in a messy howl. I laugh inside my helmet – he’s missed a shift... didn’t roll off enough? Heh, heh, rookie mistake...

We’ve travelled around 200 km so far, starting out with me on the black R6, getting a stint in on the maroon 2004 R1, before exchanging it for the scarlet R6S. Yamaha invited us to slide into the saddles of seven big bikes.While one is a serious launch prospect (in its 2008 garb), the idea is primarily to allow us (and vicariously, you!) to get a feel for what big multi-cylinder engines will feel like in our conditions – in our heat, in our chaos and on our wayward roads. Today we ride into Jaipur, tomorrow we bazz about as we please and the day after, we scream back into Delhi, cram into a flight home, heads buzzing with a kaleidoscope of sensations, memories of heady speed and shaking hands powered by sweet, sweet adrenaline.

To be honest, I should be spending loads of time with the R1. I should be button-holing the Yamaha people about launch times, prices and all of that. But BSM has a few aces up its sleeve. Of the lot on offer, we’ve already featured the FJR1300 (December, 2002)  and the DragStar (February, 2004) and we’ve been lucky to have ridden every single R1 except, I think, the 2003 and 2007 models (no one’s riding the 2008 until later, worldwide). So today, I’m plugging the one gaping hole that I’ve been aching to fill – to ride an R6 hard.   The Yamaha YZF-R6 created a stir in the 600c supersport segment that almost outdid the hype around the 1998 R1 launch. And the attributes Yamaha harped about struck one chord after another. Like 56 degrees of lean. Like journos criticising/marvelling at its single-minded focus. Like Bike UK voting it the second best bike of all time behind the original Fireblade... there’s a lot of ‘likes’ in here. And while I was riding a Bullet 500 to Leh, Nandu sneaked out on an R6. So that was a debt waiting to be paid as well. Given that he’s on a tricker, faster machine and I am ahead, we’ll consider it settled, eh?

But despite the fact that the new R6 (black) and the R6S (red) are from the same family, they are quite different. And I’m beginning to grasp why Yamaha have two R6s in their lineup. It so happens that they launched the 2006 R6 to be a pure track weapon. In a manner not unlike SUVs, a large number were never actually going to go to a track, but that didn’t matter. The motorcycle was one of the sweetest tastes you could offer to a performance enthusiast. Honey poured off the reviews, journalists went idiom-hunting to capture the incredible handling and the monstrous motor that was controlled by-wire and had a gourmand’s appetite for revs. Of course, the looks, justifiably, got lots of raving going too. The 2005 R6, suddenly, looked old. Just a year ago, the same journalists were talking about how sharp it was, and despite that, how easy it was to live with at slower, mundane speeds. The 2005 R6, with some upgrades, became the R6S. A slower motorcycle than the new one, but a far more realistic one, and a significantly cheaper one as well.

Which is why I keep thinking I’m holding the trump cards. For when this hungry road dwindles into city streets, it won’t matter how much faster Nandu’s R6 is. I’ll still be comfortable and coddled, while his wrists will tell him for hours afterward that he was riding a track demon below pit lane speeds.

But don’t for a minute think that the R6S (which I’m deeply in love with) is the outright winner if this were a comparison test. The older motor is sweet, super-refined, has a lovely torque spread and a bazooka like top-end. And as I said, it’s real. The clip-ons are meant for human beings, the pegs aren’t all that rearset. And on the whole, it can probably do everything except overtake HMS Britannia on open water, win the Dakar and take Yamaha to a Supercross title.

But the R6... oh the R6... is a hair-raising motorcycle that the R6S can only dream of becoming. The first thing that strikes you about the R6 is the sound. While emissions tuning means the stubby little canister is restricted to a noticeable, but not loud hum, the airbox has a glorious, addictive singing voice. And it isn’t shy of belting out lusty arias either. Wring the throttle open and the howl that accompanies the blistering acceleration will have your hair standing on end. So electrifying is the sound that I caught myself over-blipping on downshifts, and in traffic, changing gear purely for the heck of it. One of my favourite vids is a ZX-12R whooshing from zero to top speed with the engine sounds replaced by t.a.T.u’s Not Gonna Get Us. From the saddle, this looks and sounds even better!    The track focus is always there. The engine makes enough torque at all revs to make short work of our traffic. But the first time you hit 10,000 rpm, the R6 turns that perception on its head, and then kicks it hard in the backside twice just for good measure. At 10K, the R6 passes into an alternate dimension, which whooshes it up to serious speeds in an instant, holding you in an impossible lunge with a screaming, cheering engine that won’t quit. You think narco-drugs are addictive? Hoist an R6 past 10K once. You won’t ever get off that high.And it isn’t just the straight line performance either. I tasted, for the first time, the fabled single finger braking. With one finger, you can get the R6’s nose digging into the ground, rear wheel going light. A little more pressure... Rossi-style stoppie.

But the most impressive thing about the R6 is its handling. I cannot remember – and I am supposed to be a road tester – making any inputs to the motorcycle at all. It read my mind... every time, all the time. Whether you’re lolling about at 60 kph, or screaming into a turn well past your sell-by date; whether it is a sweeper, or a kink, it knows what’s on your mind and executes the thought with telepathic clarity. This is superb, superb, superb. And I’ll add another superb for emphasis, if you don’t mind.

There were only two times when I felt the R6 raise an eyebrow. The first time, I was in a sweeper, going at a fair clip, when I forgot the ‘fast bike, slow hands’ adage and whacked the throttle open. I felt – again with a directness I don’t think I’ve even felt from my beloved R1s – the rear spin up the slightest bit, before making a mild readjustment and settling down to machine gunning down the apex. The other time, the vehicle Joshua was shooting me from took an unexpected line. The moment of hesitation, when I closed the throttle, the R6 felt odd – like it was asking me, ‘Now why’d you do that? Don’t trust me?’

The R6 is a motorcycle that makes almost everything else you’ve ridden look faded and ragged. I love it to bits. Hell, if I could, I’d buy one blind, knowing that the difference in price to an R1 is tiny. It’s a tech-marvel too – it sports a superb by-wire throttle that is the most direct throttle hand to rear tyre connection I’ve ever sampled. And it should be – Valentino Rossi developed the system, didn’t he? As pleased as I am about the 800cc import rule allowing us to lay our hands on bikes like my dream R1, I’m cursing that the rule doesn’t say 598cc or more.

The R6S is sweeter and it makes the R6 look very hard-edged. It makes the R6 look like work. It revs out cleanly, smoothly and effortlessly. Where the R6 is busy thundering and burbling like a moving storm front, the R6S sounds busy, contented, focussed and happy. For India, the R6S, in my book, would be the ideal superbike to own. It would work out almost a lakh cheaper, which only makes it sweeter.

This head to head, in effect, has two winners. The R6 has my heart and the R6S has my mind. I’ve spent seven years waiting for this day. Now I’m waiting for the day when one of these two (either one will be fine) will be mine.