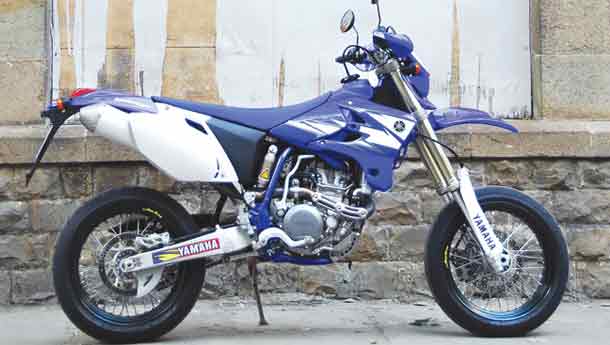 The chap on the Suzuki GSX-R600 has a funny tailfin on top of his helmet.  This much I gather as he whooshes past me in a blur of speed, windblast and considerable sound. The inline four’s bellow easily outshouts my flat-crack thumpery. But the Yamaha WR450F supermoto is far from done and dusted. As the ‘Zook’s trick LED brakes light up for the 90° right hander ahead, I make up a zillion bike lengths in a flash, needing no more corner entry prep than the flick of a wrist. The WR dives below the Gixxer neatly,
like an F-16 around a B-52, gaining an unlikely lean angle at the speed of thought.

Tailfin waits for the apex to open the throttle again, but I’m already sneaking the quick-throttle open, letting the rear Metzeler Rennsport soak up the stress and blast me out of the corner. The obligatory foot is already stuck out like an outrigger waiting to catch a slide from the trustworthy Metzeler Racetec, and the chap on the ‘Zook is about to discover why supermotos are so highly regarded.

A little more throttle and the high-freq vibes from the rear smooth out and we’re spinning – which is all good. It makes the bike take up more space in the corner, and Mr Tailfin will require more than the four-cylinder engine to take position at least some distance into the straight. Heh heh. And when he hits the next corner, I’ll slam the skinny little ‘motard right where it hurts again – between Tailfin and the apex.

This is an example of the sort of thoughts that enter your head when you are riding around on a supermotard, and some hummy-growly superbike cruises past, oblivious. And it’s mostly true as well. On tight and twisty stuff, a supermotard would be hard to catch if it were in the right hands.

Implying that my grubby paws are the aforementioned hands would be presumptuous (not to mention funny - Joshua). The Yamaha’s been ‘avoiding’ me from the start, insistently running wide in corners at a whiff of the throttle, offering extremely lumpy power unless it gets full beans and threatening to put a wheel into the sky when it does get its way.   All this is behaviour that you could call scary – or fun – but not unexpected. After all, the WR does sport a superlight DOHC, four-valve, 449cc single cylinder four stroke engine – a motor that makes a full 5 kgm at 7500 rpm and then peaks at about 40 bhp at nearly 11,000 rpm. No, no, that’s not the full story. The torque and horsepower are pushing 112 kg (dry weight). That’s 12 kg lighter than a Bajaj Discover, and a hefty 38 kg lighter than a Karizma. This means that an all-time great, ever-applicable exclamation is now overdue, so here goes. HOLY COW! Plus there is all the trick stuff – upside-down adjustable forks as thick as my arm (which isn’t really saying much, now, is it? –Joshua), adjustable rear monoshock, hot-start lever etc.
Originally, the WR450F, like all of the pioneering supermotards (in the pre-factory-motard days), was a proper dirtbike. It had a digital ‘enduro-computer’ equipped meter, no knuckle guards and big wheels (21-inch front and 18-inch rear – only the YZs get 19-inch rears (see box) with knobblies on them. It’s come a long way. The digi has been canned in favour of a tiny analog unit, full knuckle guards protect your paws and 17-inch aluminium wheels from DID have taken over, wearing the sticky, almost slick-like Metzelers. From what I understand, the only things missed out in a full-on supermotard mod list is an even bigger front disc and axle sliders (plastic/PVC buttons that work like knee sliders for the axles). There’s more. The WR is famously restricted and requires a grey wire to be snipped (don’t ask me which one), an airbox restrictor to be removed and the pipe to be replaced with a more free-flow one to make even more power. Would 55 bhp be enough for you, dude? But this one hasn’t been fully run-in yet, so it doesn’t rev to the full moon yet either.

Not that you’d notice. The throttle only opens a quarter turn to go from nothing-coming to flash-flood. It scares you first, and then you’re addicted. The weightless single just bolts up the rev range with abandon, almost as if there wasn’t a crankshaft at all. Ridden like this, the front wheel ‘floats’ just above the surface at all times. While I’m telling you all of this, I’m actually busy trying to recall every supermotard pic I’ve ever cast eyes on. Because so far, I’m making as much progress with this bike as I made with all of my high school crushes – the WR won’t even deign to talk to me.   Then I alter the way I’m riding it. I start hanging out of the corners, letting the bike sniff the daffodils while I stay more or less upright. The WR is suddenly all business –  accurate lines, numbing lean angles, booming exhaust note and amazing, feedback-rich, unending drive. In a flash, I’m a hero. Still clueless, but now heroically so. I love this bike. And not just because I now look like a hero; this is a pure, undiluted, old-fashioned adrenaline injection.

And don’t for a moment think its perfect. Far from it. Not only is it lumpy at low revs, it just will not settle down unless you give it full throttle. It also appears to have a tall seat crafted out of coloured/textured wood. The sidestand is longer than, erm... an obelisk, and keeps threatening to flip the bike over all the time. And there is no storage of any sort to be had on the bike whatsoever. Got pockets?

Despite all this, I cannot imagine a machine more suited to my commute. You sit tall. You have 40 bhp. And a machine that really does not care what the road below is like. Masterstroke! Potholes? Absorbed. Broken surface? Blast through. Speed breakers? Wheelie over. In a pinch, you could also ride over sidewalks, medians, through the gutter... oh yeah, this is the real McCoy, my kind of commuter; a bike that’d burn through the urban jungle before setting fire to the mountain roads. Not that we commend or recommend such shenanigans, but the WR tempts you. It sweetly whispers, ‘Why not break a few rules today?’ at every opportunity.

In fact, after ten minutes in the saddle, I’m ready to make space in my dream garage for one of these. I’ll just park the M6 closer to the wall, move the R1 in a bit deeper and stoppie the WR in just behind it. Perfect. Now, to tell the wife...