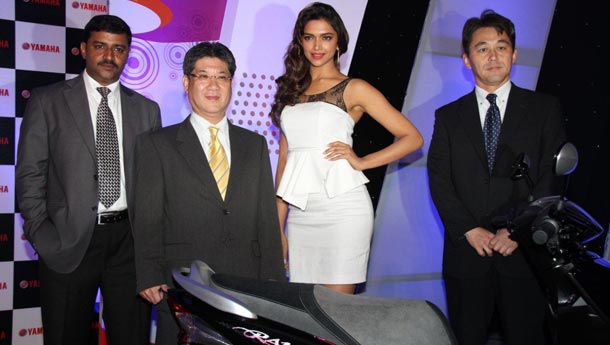 Yamaha today announced that its new brand ambassador for the company's scooter for women is Bollywood actress Deepika Padukone. The scooter, called the Ray, will be launched by September this year and is targeted at young urban girls who want an exciting set of wheels along with a youthful style quotient.

The CEO and MD of India Yamaha Motor Pvt. Ltd., Mr. Hiroyuki Suzuki commented that the company has invested about 750 crore rupees in India in 2012 on its existing Surajpur and Faridabad plants, and is expected to invest an additional 1500 crores in the next five years. The company is also setting up an additional plant in Chennai that should ramp up the total production capacity in excess of 2.5 million units by 2018. To keep up with the increase in sales, Yamaha also intends to increase the customer service points to 1400 locations by the end of this year.

Yamaha claims that in comparison to the 10 percent growth in motorcycle sales in the country, scooter numbers have increased by about 25 percent, making the scooter segment a place to be in. The Ray will be targeted at women, but there's a more male oriented scoot that should follow soon enough. As they say, ladies first!