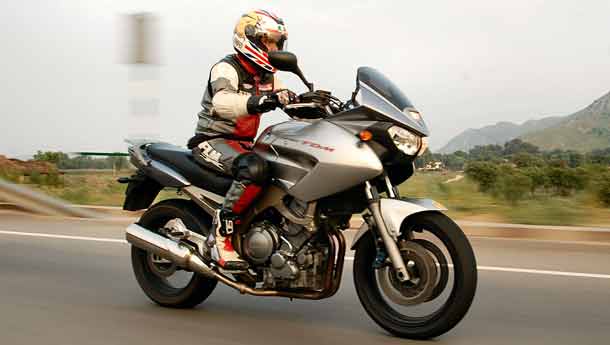 Perspective is a powerful thing – thank god for lunch. Mystified? Well, Joshua, Shreenand and I
took an early break for lunch after headbanging on the two R6s. Then we took a further half hour to loll around before we actually swung into the waiting saddles of the two other bikes we deeply wanted to log saddle time on, the TDM900 and the XJR1300.

They’re clubbed together here for space reasons, but these two would be my pick for the second (or third, if you count the FZ1) salvo in Yamaha’s CBU program for India. The TDM, for instance, is not the best looking motorcycle here, but as everyone who spent time in the saddle will tell you (whether you ask or not) it is comfortable, fast enough, feels genuinely relaxed at almost any speed and can corner as well. The format is a bit odd, resting halfway between a proper adventure tourer and a normal streetbike. But in feel, it’s a tall streetbike with versatility thrown in abundantly. In India, this would be the right motorcycle for a rider who has gotten over his speed fixation, who understands that a tall position in traffic is not something to be scoffed at and that a leisurely 120 kph will get you farther along on a holiday than a frenetic 140. Put some luggage on and head out. A comfy saddle, long tank range (I won’t tell you how often we were heading into petrol pumps thanks to the rather more thirsty R6s and R1), good protection from the tall-ish screen... this is an understated performer that will keep you enthralled. And yet, it isn’t brash like the R6s or the R1, so you ride on without constant ergonomic intrusion. Lovely, but I think I’m still too young for this one.

The XJR1300, on the other hand, is a lively, feisty one. 1300cc, nearly 100 bhp (the latest ones also get fuel injection), wide bars, and an upright riding position... it has to have character. And it does. From the quiet but gruff idle, there is an ocean of torque waiting to soak you. All you have to do is open the throttle. Gently. And you’d better hang on. The XJR’s muscular looks are not without backup and it can call up a gale in a flash. Without any wind protection, holding on past 180 kph is a short-lived, painful demonstration of pure willpower. Thankfully, riding at a breezy 120-130 kph takes little effort and the XJR is quick to promote smiles.

This is the bike for the compulsive, daily rider. Log commuting miles in comfort, then throw some saddlebags on and head out for the weekend. And really, there’s no need to stop – tank range and saddle comfort are top notch. The XJR, a very popular Yamaha all over the world, was designed to handle a variety of roles, the urban crawl being a major part of it. This is why the steering is surprisingly light and, despite its weight and size, the XJR is easy to handle in traffic. However, if you’re just gotten off something like a TDM or an FJR or, God help, an R1, the front end feels scary to start with. Heading into a sweeper, the leverage and lightness of the front combine to make the motorcycle feel odd, as if the rear grip levels were much, much higher than the front. But it’s a feeling that goes away as you log more miles.

On the whole, I loved the XJR’s delicate balance between super-thrilling low-rev torque, a useful all-day riding position and maneuverability. If I weren’t so obsessed with sportbikes or their derivatives (yes, that FZ1 makes its second appearance), this would be a seriously garage-worthy bike for me. It is, after all, fast, confidence inspiring, un-frenetic and good looking. But here’s the thing. Once Joshua and I both had saddle time on the XJR, we leaped to the exact same conclusion – Yamaha didn’t build the XJR to be versatile, urban-smart and the like – they built it for Bijoy.