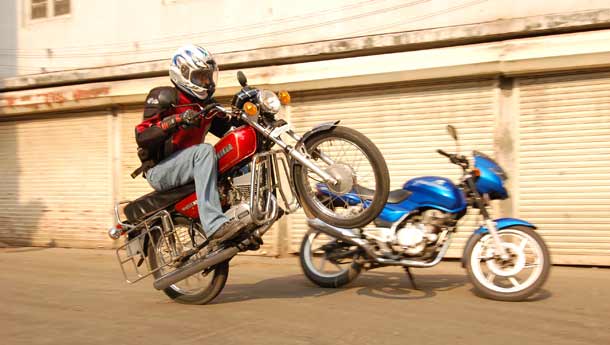 If you yearn for the insane buzz only an old two-stroke can give, this is it. Sure, you could get yourself the bigger sibling of the RX 100, but these days, RD 350s go for some pretty ridiculous amounts of money.

The RX 100s have always had an ardent fan-following and there’s a good reason why. The RX shines in almost every avatar, be it in bone stock form, as a cafe racer or even in dirt bike trim. Just as much as they are versatile, these bikes are equally indestructible. When things actually go CRUNCH in the engine, which seldom happens, spare parts are much easier and cheaper to get than the other two-strokes that were sold at the time.

WHICH VERSION SHOULD I GO FOR?

Prices for the pre-’90s RXs have gone up, since people claim that they were Japanese imports. Although that is debatable, what is a fact is that the RX has remained pretty much the same hooligan throughout its production life span. The 100 grew into the 135 and then after a while, the four speed gearbox gained one more cog.

The 100s seem to be easier to find than the 135s. The RXZ versions are the most sought after and the  sharp bikini fairing is largely responsible for that. Parts for the 100s are easier to come by and hence, buying one of these makes the most sense for people who want a hassle-free ownership experience.

HOW MUCH SHOULD I PAY FOR ONE?

Everyone these days seems to have been bitten by the two-stroke bug. Years of riding soulless four-stroke motorcycles seem to have taken a toll on the avid motorcyclist. This resurgence in the interest in two-strokes, coupled with the already astronomical prices of other smokers like

the Shogun, has caused an increase in the cost of used RX 100s in the market. Do not fret, though, because they are still quite affordable. A good, running bike, with scruffy paint work, should set you back by anything between Rs 10,000 to 15,000. Pristine examples can be had for about Rs 25,000.

WHAT TO LOOK OUT FOR

Stay away from ‘modified’ motorcycles. It’s better to buy one and do the work yourself if you intend to do so, rather than rely on someone else’s magnum hopeless. Mechanically, these bikes are bullet-proof. That also means people tend to ignore routine maintenance, which isn’t very good for the motor in the long run. The RX 100 can run with its oil pump disconnected, but that means the rider has to be diligent with mixing oil in the right proportions with the petrol. Check for abnormal clicking, grinding and humming sounds from the engine, because they could be give-aways for piston slap, a blown bottom end and worn bearings respectively. Make sure you ride the bike to ensure that the motorcycle tracks true. Importantly, the bike should accelerate and make you feel like you’ve just been kicked in the pants. If it doesn’t, it definitely isn’t a healthy motorcycle.