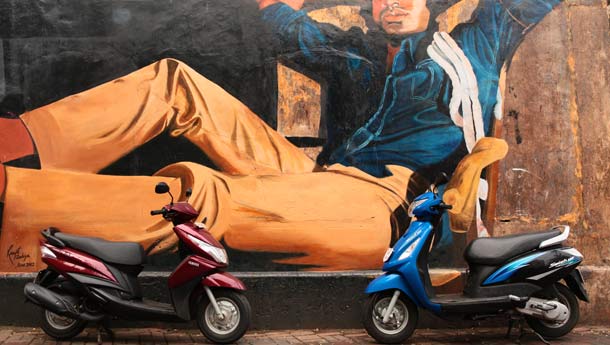 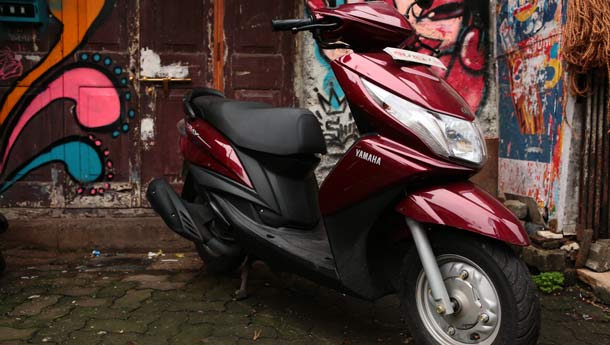 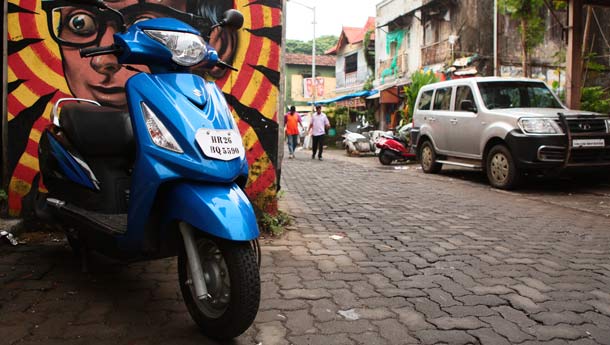 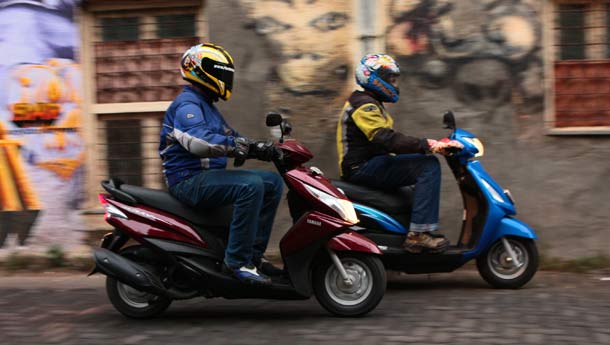 This was supposed to be a girl versus boy story. A spunky PYT was to turn up in full riding kit and ride the pants off the Yamaha Ray, which claims woman-centric design elements and features. My role was to bring in the Suzuki Swish, the winner of our last scooter shoot-out (BSM, June 2012), to this test for a balanced, fair comparison. Blame it on Murphy or my awful social skills (we think it’s the latter – the entire BSM team), but the job of adding the woman’s perspective to this story has, as you can see, landed in my lap. ‘Will my humongous handbag, three cellphones, spare clothes and a stretch-limo Range Rover fit in the under-seat bay?’. It’s a challenging role and definitely a high point of my acting journalistic career.

Now, men I know like their variomatic scooters peppy, comfortable and utterly stress-free. Girls, on the other hand, like their scooters light, stylish, with lots of space and with as little motorcycle-ness (no vibes, no narrow/too-demanding powerband, no kick-starting...) as possible. So which of these two scooters can best satisfy the needs of both sexes?

The Ray is very much like the first-gen R15 – the front end is smashing, and the rear has enough room for improvement for when Yamaha plans a V2.0 version. It all blends perfectly, though, and if it weren’t for the Dio, the Ray would have easily passed off as the best looking scooter in the country today, this side of the Vespa. It turns heads (more so because of the surprise the ‘Yamaha’ decals invite) and it brings in a much-needed shot of ‘sporty’ now that the Dio’s gone a bit salt-n-pepper.

The Swish isn’t half as good looking as the Ray, but you won’t be embarrassed to find yourself riding one. The lines are clean, the colour-combos refreshing and it is dimensionally unisex. In the time to come, Suzuki will need to spruce up the looks (or design all-new bodywork), however. Round one goes to the Ray, no argument. Well done, Yamaha.

Both start at the push of a button, both have telescopic forks and both have enough under-seat storage space (20 litres in the Swish, 15.5 in the Ray) for everything smaller than a full-face helmet. A fuel gauge is present on either scooter although I like the Yamaha’s instrument cluster more. The Ray also has two cubby holes under the ‘dashboard’, should you decide to buy exactly one pair of apples or samosas – there is no way on earth I’m leaving my constantly beeping Blackberry (this is the girl’s part of the script, honest!) in an exposed, angular bin! No radical fuel-filler cap positioning, however, though you’ll find that a pain only if you find wearing shoes or doing something equally elementary a pain as well. Round two is, hence, a tie.

The Swish’s 124cc, 8.58 bhp motor is lively enough to put some 110cc commuter motorcycles to shame and it’s as refined as it is peppy. It is, of course, at an advantage in this comparison what with its superior specifications (and higher price tag – but you can compensate for the extra 4 grand by buying a cheaper cell phone and no shoes this year), but I don’t need to refer to test numbers (a manly way to say ‘I misplaced the test numbers but am not man enough to say so’ – Srini) to be able to tell you the Swish is quicker than the Ray. Long sentence, that.

The Ray has a 113cc, 7 bhp, 0.82 kgm motor that, while refined, lacks the sort of punch you’d expect from a scooter that promises so much ‘sporty’ right from the moment you look at it. You’re not left asking for more refinement, thankfully, but the Ray would have been so much better off with even just two more horses. It makes up by offering crisp throttle response and good initial power delivery, which makes light work of urban riding, although post 60 kph, progress really starts to slow down. In a traffic-light drag race, the Swish will beat the Ray, fair and square.

That said, I admire the Swish for being quicker and still more fuel-efficient than the Ray. Under hard throttle usage, the Swish dropped to a worst fuel efficiency figure of 34 kpl, which is two more than the Ray, and with a 39 kpl overall efficiency figure (36 kpl for the Ray), it is only too good an excuse to get yourself a more powerful scoot. Round three goes to the Suzuki, then.

Before the Ray came along, the Swish left little to the imagination in terms of handling, knee-downs aside. Swing a leg over (or through, as is the case) the Ray, however, and the immediacy with which it changes direction will amaze you. It’s sporty, agile, and is almost like an R15 in the guise of a scooter! I’ve always fancied riding scooters on a go-kart track and given the opportunity, I know I’ll be the first to sign up for a Ray.

Having said that, the Ray and the Swish are evenly matched on the ride quality front, though the Swish feels more ‘solid’ when put to abusive road surfaces. Still, Yamaha has done well to offer telescopic forks (and so has Suzuki), which makes the Ray one of the more planted, predictable handling packages you can buy in this segment. A point each, for ride and handling respectively, to the Swish and the Ray.

The Yamaha Ray is a much better package than all the other female-centric scooters that we have had on sale so far. And still, I won’t hand this comparison over to the Ray because it has so much potential, it does not need to bank on just one gender. Sexist product development and marketing strategies may work for cellphones, but often have failed on motorcycles. This is what instinctively keeps me off recommending the Pleasure and the Scooty Pep to boys. Now, why would Yamaha want to shoo away people who’d be really interested in buying a Ray by blowing a pink bubble around it?

The Swish, too, has its weaknesses. The styling, while fresh, has a short shelf life and, more importantly, Suzuki desperately needs to expand its sales and service network. My guess is, designing all-new bodywork and acquiring a dozen more dealers is a more daunting task than squeezing out two bhp more. Which means when Yamaha does the needful and bins the girl-talk, the Ray will be very, very hard to beat. Until that happens, however, the Swish gets to keep its podium top-slot. Congratulations, Suzuki, but I hope you’ve got an ace up your sleeve. We’re out to have some serious fun, okay?