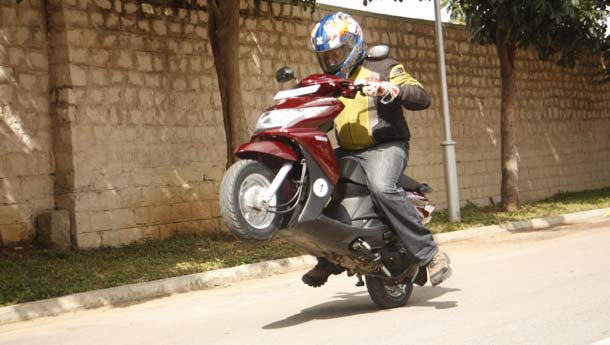 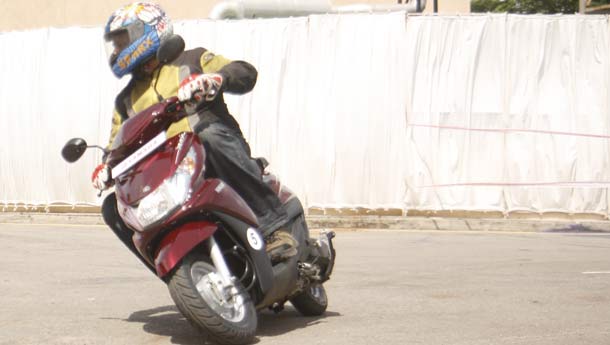 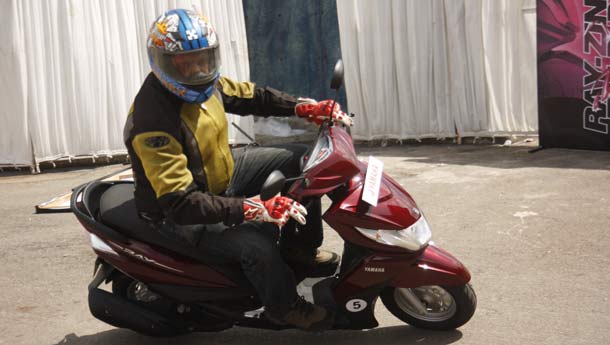 Quite frankly, I think it’s a pity that Yamaha has chosen to go ahead and market the Ray – the company’s debut in the now increasingly lucrative scooter market – as a set of wheels just for women. After sampling the scooter at the launch in Hyderabad, I really could see myself on one of these, but now that the company’s marketing machinery has made sure that estrogen and make-up, among other things, are prerequisites to own one, I’m awfully disappointed. I’m not sexist and hence not at all bothered by the thought of riding a scooter built on a production line ‘manned’ exclusively by women. But riding a scooter touted as a steed solely for the fairer sex is a bit too much for me to digest.

You see, the Ray is a very well designed product and it has been developed specifically for India. Although it does bear the name of the Cygnus family of Yamaha scooters on its flanks, it shares little or nothing with them. The motor is all new and so is most of the frame and other cycle parts – this is Yamaha’s first-ever scooter in the Indian market so there is no question of raiding an older parts bin. The way the headlight and flashers integrate with each other on the apron, the sharp tail light assembly, and the overall combination of angles and slashes throughout the Ray’s bodywork make the Yamaha, in my opinion, easily the best looking scooter on sale in the country, save for the Vespa. Finally, here comes a scooter that a young lad can picture himself on perfectly, rather than seeming like a bloke who found the keys to his grandpa’s ride. And then Yamaha goes ahead and proclaims it’s for men in frocks. Sigh! At least the Scots will be thrilled!

The Ray is a very well thought-out scooter. Various components have been designed with the target audience in mind, which happens to be girls who are between 16 and 24 years of age. It’s another matter altogether that 16 year olds, regardless of gender, aren’t allowed to ride scooters displacing above 50cc here in India. But let me not digress.

Innovative design features include bits like the ‘hip stopper’, which is essentially Yamaha speak for a sissy bar with a slightly raised mid section. The floor board has been chiselled so that the rider’s calves won’t foul with it when his/her feet are on the ground, while the seat has a tapering front end for what Yamaha would like to describe as a ‘small touch feeling to thighs’. Yeah, so it’s quite groovy, and I swear that I made none of that up.

What Deepika Padukone – the Ray’s brand ambassador – and others like her would love about the Ray is the scooter’s ride quality. Those telescopic forks at the front, along with the lone shock at the rear, can really take a beating without sending too much abuse back up the rider’s seat. The comfortable seat helps, too, and despite being designed for petite riders, was quite comfortable even for me.

Despite repeatedly pounding the Ray over a series of tall speed breakers, the scoot was doggedly unfazed, which really is commendable for a scooter with 10 inch wheels. Speaking of which, the MRF Zappers offer tremendous grip, instilling tonnes of confidence around corners. And boy oh boy! You can really take corners with this one! Although, I must admit, the venue provided for only medium-speed runs, the Ray appeared agile and confident whilst leaned over. Quick changes in direction were a breeze, and the narrow dimensions will certainly provide for good traffic sifting capability.

The 113cc motor, that produces 7 bhp and 0.8 kgm of torque, is pretty much up to the task of moving two persons up a gradual slope. However, the Ray does have to make do without the low down grunt that some larger 125cc scoots possess, especially the Suzuki siblings. When riding solo, the lack of horse power isn’t as apparent, but it sure isn’t going to break any land speed records. The 130 mm drum brakes are decent and do their job but are still no substitute for disc brakes. It’s about time discs become the mainstay stoppers for scooters, at least at the front end, like they have for most motorcycles sold today.

Certain things about the Ray, however, leave a lot to be desired. The gauges, although easy to read and well laid out, seem a tad tacky. Some of the plastics, like the bag hook, for example, are simply dowdy. The cubby holes, although a thoughtful touch, are angled in a way that may not help hold their contents very securely. As hard as the Yamaha marketing think-tanks might try to market it otherwise, the fact is that the Yamaha Ray is a stellar unisex scooter. It can well be a hit with the college crowd and at Rs 46,000 (ex-showroom, Delhi), it won’t hurt parents’ allets either. A tip for the blokes, however; stay away from the ‘Plush Pink’ and the ‘Purple Pastel’ and you’ll be just fine!