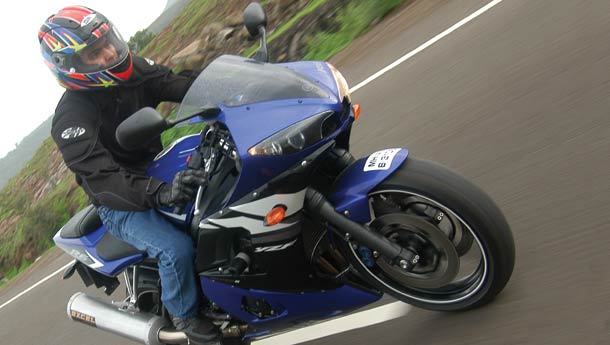 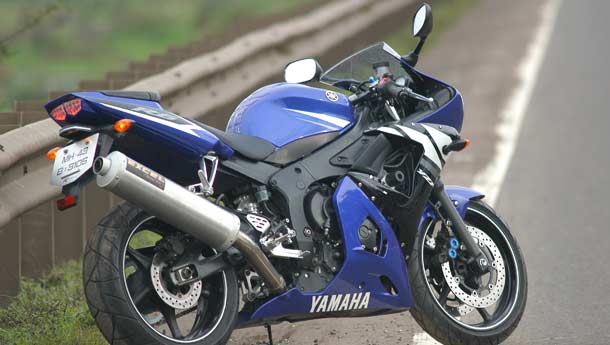 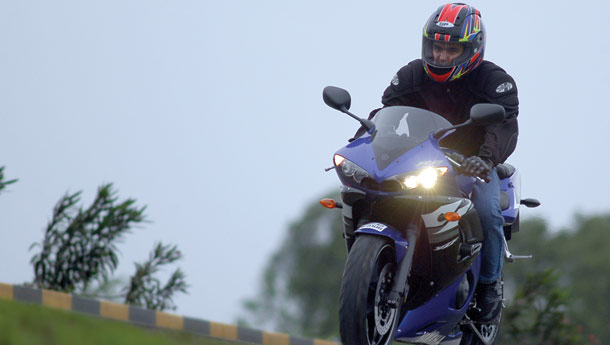 Desperate times call for desperate measures. That’s why every time I find myself in a tight spot, I head for the loo. I am not trying to be funny here. You see, I have a theory that some  people are born great, while others have greatness thrust on to them... while they are in the  bathroom. And while it’s irrelevant what I do on my side of the door, the most amazing things happen to me when I am stuck inside. Over the years this theory has been proven repeatedly – just like it  was this time around. We had three days to go before we closed this issue with no big bike in sight. As usual it was time to head to the men’s room. It was status quo when I came out – and that’s when Srini said, ‘Would you like to ride an R6?’ ‘ Would I?!’ Now, in the last six years, we’ve managed to get our hands on the most brilliant motorcycles. Yet, somehow an R6 has always eluded us. What did I tell you?. Some people are born great, while others have greatness thrust on to them ...

Anyway, before I knew it I had the nifty little R6 in front of me, and that too in proper Yamaha  colours. Visually, the bike is simply stunning from any angle, an absolute photographer’s dream.  The theme here is edgy, right from the Gatling beam multi-reflector headlights and ram-air intakes to the LED taillights. The R6 puts on the finest silhouette since Beyonce Knowles pulled up a pair of hot pants. Instrumentation is extremely tidy, with a big white-faced tacho and a speedo on the side augmented by a shift light. Under the slick bodywork lies a frame that Yamaha  says has the torsional rigidity of a YZR-R7 – the homologation cruise missile. We’re talking racetrack stiffness here. Attached to this is the slickest looking swingarm ever to grace a stock motorcycle, and a 600cc rev-mad motor that comes with its own bag of tricks, including fuel-injection. Once the fuel is in the cylinders, it’s ignited by iridium spark plugs.   Now, it might be just a 600, but its got 162 kilos and 102 bhp coming at the 180/55 ZR 17 rear. Ooh! You bet ooh. The ‘04 version is an updated version of the second-generation R6 and came with a bit more power (as always), and an improved exhaust flow. When Britain’s MCN took it to Italy’s Nardo speed bowl, they recorded a blistering 163mph; that’s nearly as fast as a litre-class motorcycle. Well, that’s enough of that. Time to ride.

When you ride it slow, it gets itchy. It wants to go, and when it does, it really gets up and  goes, and you see why. First gear spans 0 to 102 kph and acts like an afterburner when you  twist the throttle. 120kph, Indica flying backwards; 130kph, clenched bottom; 140 and the road is being swallowed with eye-widening greed; 150, white knuckles; 170, dollops of dopamine and adrenaline; 186 and it’s a personal land speed record.
The R6 deals out speeds that are instantly addictive. With 15,000 revs to be relished, tapping into performance is easy. It’s responsive and eager, effortlessly building a long linear power delivery. The little 6 takes off like a scalded cat, while the potent midrange means you don’t even need a downshift. But if you do, you will find yourself looking at the sky, and the only thing that will be louder than the helmet will be you screaming in your lid.  The R6 turns even the  most docile of riders into 16,000-rpm users, second-gear power-wheelie, shift light junkies. The only thing one needs to be careful about, though, is while reapplying throttle at high revs. Response from the fuel injection is a bit abrupt.

But I know what you guys really want to read about. The hallowed handling, right? The first  generation Six was the nimblest of all sportbike scalpels – thanks to the most radical steering geometry of all. Since then, the game’s moved further. But the fact that it makes up half of the AMA Supersport grid of 2004 is a testimony to its ‘Best handler in the world’ moniker.The sharp edged theme isn’t restricted just to the aesthetics, you see. The handling is so spot on, you can mercilessly throw it into a corner, grab all the lean there is on offer, feed in manic levels of throttle through the corners and out of the apex, you will touch bliss. The R6 thrives on a diet of corners – chicanes for lunch, hairpins for dinner. The straights in-between make perfect snacks. The little Yam is so composed and balanced through the corners, it’s as if it were sitting back and relaxing against a tree.   Having said that, the steering is a bit too light and the front end does lack a bit of feel. On a  motorcycle that comes blessed with telepathic handling, this is a bit annoying. But it’s something  that should be fixed with a higher profile than the current 120/60 R17 it runs on. How do I know that? Hey, you don’t spend four years getting a degree in automobile engineering for nothing – though all the R6 road tests I read helped too. Initial bite from the four piston, 298mm discs upfront is very sharp and remarkably elevated  street speeds can be shrugged off in a hurry and with alacrity. The brakes just make the  motorcycle as complete as a 7-course buffet and as delightful to ride as a ‘no charge for this’ statement after the meal.

And to tell you the truth, it’s less intimidating riding position means that sustained speed  doesn’t tax the rider as much as the ferocious R1. You could sport-tour on this thing if the mood strikes you, with the mechanical symphony underneath your chest being the dominant sound. Meanwhile, I’m trying to get over the separation anxiety that’s plagued me ever since we loaded the bike back on to the truck, while the need to hear four cylinders howling has grown to unachieved heights. The R6 is an incredible motorcycle that’s capable of giving you heartache in seconds and heart burn in minutes. By the way, Bijoy’s just come in and he says there is a 500-bhp sedan that we may get to drive. Time to head  to the loo.

For more info on the R6, speak to Raju Sheikh at 098220 58768. Raju has graduated from the famed Motorcycle Mechanics Institute (MMI) and should be able to help you out with any motorcycle you have.