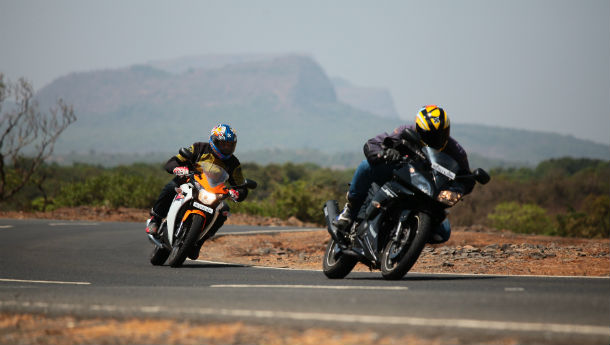 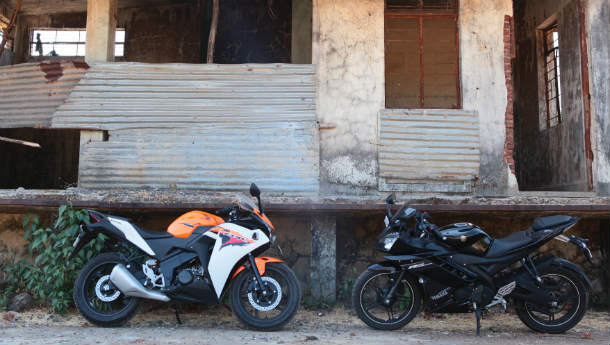 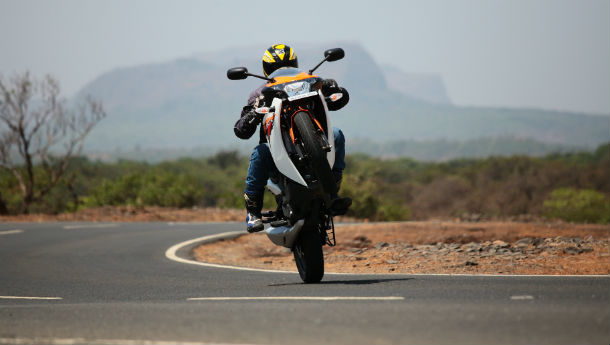 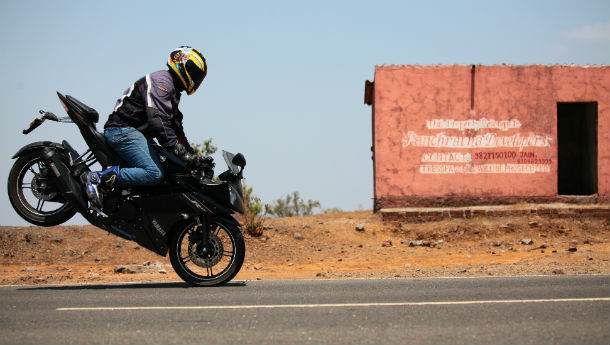 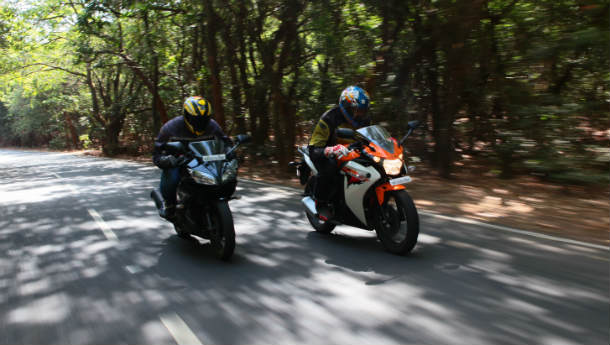 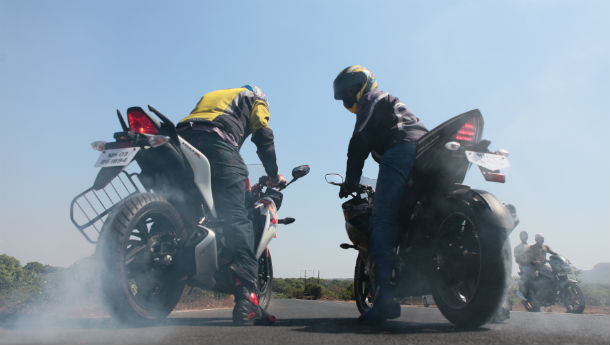 Come on, admit it. This one was inevitable. The day Honda decided to sell a sporty 150cc motorcycle powered by a single cylinder liquid cooled motor in India, the Yamaha R15 was the bike to take on. After all, the R15 was the king of the hill at the time, and when it was first launched in 2008, it rewrote all the rules that motorcycle manufacturers were to follow there on.

And those were steadfast, non-bendable rules, I must remind you. Before the R15, it was almost a belief that liquid cooled, fully-faired sporty motorcycles could not be had for below Rs 1.5 lakh. The R15 went on and did just that, banishing the naysayers into oblivion.

But even the greats run their course. And being the best of the pack comes with its own set of problems. Nobody wants to be an also-ran, and it just makes the competition work harder to up their game, it makes them desperate to usurp the crown, to come up as the top of the lot. So then, has the R15, now in its Version 2 avatar, finally met its match in the CBR 150R? Well, there is only one way to find out – dissect every aspect that contributes to the whole of both motorcycles and then compare them with each other. So let’s first look at the acceleration figures. The R15 Version 2 clocked a 0-60 kph time of 5.7 seconds, while the tonne on the Yamaha came in at 15.01 seconds. The Honda, on the other hand, did a 0-60 kph run in 5.9 seconds while 100 kph came at 15.08 seconds from standstill. It must be noted that the Yamaha had about 20,000-odd kilometres on its odometer, while the CBR had done a mere 535 kilometres.

Numbers are one thing, but that seat-of-your-pants feeling is what largely matters when it comes to motorcycles. Gut feel, if I may say so. Without much ado, here goes...

The R15 has always been most perky higher up the rev range. Putter around in traffic with a pillion, and you’ll realise that you would be happier with the FZ 16. But when you begin to understand the R15, you start to rev the 16.8 bhp and 1.5 kgm motor harder before upshifts, just the way it likes it. In return, you get acceleration that will most definitely out-gun every other 150 currently sold in the market.

Save the CBR. Displacing 149.4 cc with 17.5 bhp of pony power and 1.3 kgm of torque, the CBR more than just keeps up with the R15. But the motor displays all the typical Honda traits – refinement and a rather characterless air about it. It pulls hard, but despite making those seventeen and a half horses gallop at a heady 10,500 rpm, it appears to take longer to climb through the revs. It’s almost like Rossi in a tuxedo – you know it’s quick and all of that but there’s something about it that seems rather out of place. Slogging the CBR from standstill requires considerably more coaxing with the clutch than the R15, which seems more eager to blast forward, thanks to it’s higher torque output.

The R15 fans the hooligan flame burning within you,urging you to flog that throttle all day long. The Honda, on the other hand will – how do I put it – merely go as fast as your throttle hand commands. There’s no occasion as the numbers on the digital speedo move in an ascending order. There’s no excitement. Almost like barbequeing in a microwave...

The CBR is extremely neutral in the way it dances. You can plot your line and if you’re doing something even remotely right, it will follow true. Whether it’s a tight corner or a long winding curve, the Honda does its thing rather well, with its grippy MRF Zapper rubber and all.

The older R15 was an nimble motorcycle with the ability to quickly change direction. The Version 2.0, however, demands a little more nudging to throw about, all thanks to the wheelbase being increased. But the slight increase in heft required to toss the motorcycle this way and that has been compensated with a tangible improvement in straight line stability.

As you probably rightly concluded after reading the above, both motorcycles are sorted in the handling department. But the R15 is just a little more reassuring around the twisties, more planted and sure-footed than the Honda. On the Yamaha, you begin to push yourself harder and harder, beginning to experiment with various lines around the same corner. It’s never as simple, read boring, as fire and forget. The R15 is all fire, fire, fire, making it much more involving to ride than the CBR 150R.

Reality can be a bummer. I mean, we would all love to live in a realm where the daily commute involves a couple of laps of race track, shortly followed by pristine black top running through wooded hills and then finished off by a long straight leading directly to the office.

But that’s never the case. And more so if you live in a city like Mumbai, where pothole-free roads are rarer than hen’s teeth! On the rough stretches, the R15 can chatter, and it simply won’t soak up the bad stuff enough to keep a smile on your face.

The CBR, on the other hand, feels more plush over broken roads. The suspension is more supple, and Honda has done a great job in putting together a splendid combination of soft and taut with the set up, preventing the CBR from appearing mushy around corners.

As a post script, I must mention that the R15’s riding position is too track-centric, so much so that the foetal crouch can get tiring, especially on extended highway rides. The compact ergonomics make it hard for a rider of my height and width to comfortably fit in. My knees didn’t tuck into recesses in the flanks of the tank on the older R15 and they still don’t on Version 2. After a few hours aboard the R15, my wrists began to tire and my neck grew sore. Oh, and let’s not forget the fact that the pillion has to perch himself (or herself) on the fourth floor...

The CBR, on the other hand, features a riding position that is far less extreme, yet manages to impress as being sporty. Despite the clip on bars being too much at an acute angle for my liking, the rider’s knees aren’t bent as much as they are on the R15 and the ergonomics are more one-size-fits-all than not. Long rides on this one won’t tire you out as much as the Yamaha. Highway mongers, rejoice!

The Yamaha does well in this department, with its 270 mm disc up front and the 220 mm rotor at the rear. Brake feel is sharp at the front, though the rear one does feel a tad numb. With no ABS nanny to watch over you, you have to be prudent in pulling in the stoppers. The position of the brake pedal on the test bike was too high for my comfort, making me place my foot in a rather awkward, and hence uncomfortable, angle on the foot peg.

Stopping power on the CBR is ample and equals that of the Yamaha, with the combination of the 276 mm disc at the front and the 220 mm unit at the rear. In comparison, the CBR’s brakes do feel wooden but that aside, they are quite up to the task at hand. Unlike its larger sibling, the CBR is not available with ABS, even as an optional extra, so you’d better watch out.

Although styling is a subjective aspect, I can safely say that the older R15 looked disjointed. Till about the mid-section, the Yamaha was every part the scaled-down R1 it claimed to be. There on, till the tail light, it looked like something else all together. Version 2 has a better looking tail section, but now, when viewed from the profile, the bike looks stretched. However, to me at least, it looks more complete than its predecessor, despite the fact that its styling looks dated now.

The CBR, on the other hand, with its bright paintwork (Honda had sent us one in Repsol-ish livery), is an attractive motorcycle. Although the fairing and overall lines bear an uncanny resemblance to the CBR 250R, it still comes off as fresh and youthful. I won’t be surprised that this fact alone could contribute to a lot of sales for Honda.

The R15 Version 2 would set you back by Rs 1.07 lakh, ex-showroom, Delhi. Honda, however, will charge you Rs 1.19 lakh, ex-showroom, Delhi for its CBR 150R. Wow! That’s a whole ` 12,000 over the Yamaha, which in retrospect, seems awfully over priced for a motorcycle that has to make do without essentials like a headlight flasher and an engine kill switch, things that Yamaha has shod the R15 with. Build quality is average on both motorcycles and quite frankly, apart from the novelty factor, there’s not much going for the CBR that can validate the hefty price difference over the Yamaha.

There’s no doubt here, then. The R15 still rules the roost in this segment, but it’s fair to say that the Honda is not too far behind. The battle might have been won, but the war is far from over. As I see it, this is just the beginning!