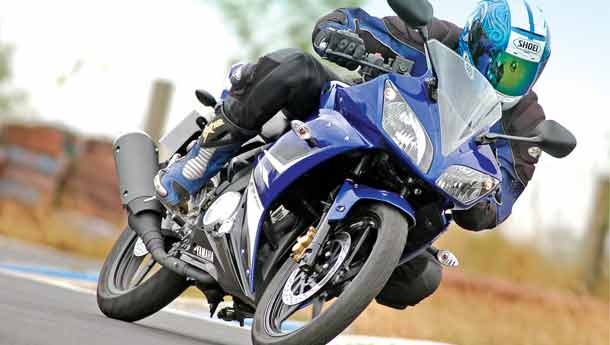 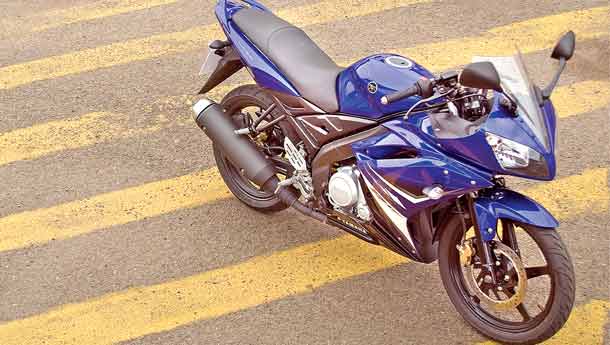 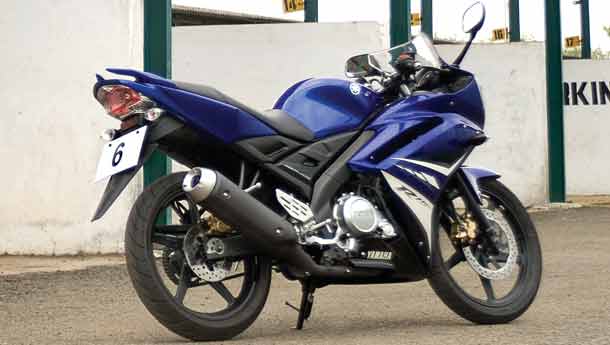 The magazine is still the most luxurious place to get to know new motorcycles. But there are other places where information, news and opinions reach you faster. So I’m not going to beat about the bush and will get straight to the point. The new Yamaha YZF-R15 is a stunning little piece of work. Yamaha have nailed it and finally we may have a motorcycle that lays a far more genuine, far more single-minded claim to being India’s first real, production sportsbike. May? Well, we haven’t tested it yet. Sportsbike? Oh yeah, you read that right. The genuine article.

Unfortunately for Yamaha, despite the fact that our market is maturing rapidly, informed motorcycle enthusiasts are lost in the crowd of laptop-ferriers, so grasping that statement is going take some work. You see, being starved of horsepower and awash in ever more lurid fuel economy claims has given us a complex, a complex that feeds on horsepower and is only quenched by it. All new motorcycles are judged solely on whether or not the horsepower claim breaches the current standard, woefully low as it may be.

On that scale, 16.8 bhp is no great shakes. That number does not single the R15 out as the most powerful motorcycle on the range. The 20 bhp Pulsar 220 retains its title. Then again, that’s the closest price-peer the R15 has. Look at displacement-peers and there are no motorcycles in the R15’s ball park. But as I started out saying, the R15 is not a one-act play at the drag strip. A sportsbike, by definition, is the ultimate in performance. And performance is not solely a function of horsepower. Horsepower helps performance. But there’s more to it.   Performance, in the sportsbike world, is an all-encompassing term. It covers the whole thing, every single aspect of it. A sportsbike must go, must turn, must stop and most crucially of it all, must thrill. That kind of all-round proficiency never comes cheap, so the sportsbike, in most cases, also turns out expensive. Trawl the two-wheeled web and you will come up with numerous displacement-based comparisons, where the sportsbikes lead the price list wildly from the top. Like the man said, you get what you pay for. So, what does Rs 97,425 buy you, really?

Bliss
I’m leaned over as far as I dare – and there are others out here who are braver than me by miles – in the long sweeper that joins the two undulating sides of the circuit at Irungattukottai. The corner is mildly off-camber and open enough to go really, really quickly. Two contact patches are holding an engaging conversation in a language I can understand. I’m expected only to listen in, take confidence, lean it further and roll the throttle open a little more. Here, ladies and gentlemen, is the most responsive, most talkative chassis in India today. The contact patch’s voice is clear. Not in the sense of every edge of the stone buried in the tar – it’s not a rock hard racebike, but in the sense of the clarity that will allow you to run embarrassing rings around that rider on the mountain road with the bigger, more powerful machine. The feedback you need to pass him around the outside and raise him a one-handed cheeky goodbye? It’s there. I haven’t road tested this bike. I haven’t even ridden on the street yet. But I’ll tell you this. Spot a half-good rider on a twisty road on one of these, and you might as well look for a place to stop for a cuppa tea. No point embarrassing yourself on a bigger machine, is there?

And it isn’t that sweeper alone. Even in the tight corners, where you are down to second gear, speeds are low, lean angles are transient but deep, the chassis remains an eloquent, encouraging voice. It says, over and over, ‘Try harder, I’ve got your back.’ The same character goes for the brakes too. Discs front and rear may be considered normal, but the way they work is far beyond that appearance. Power is there, of course, but there is feedback and the chassis is intensely stable on the brakes, which means that running it deep into corners and trailing the brakes into the apex (yeah, I left it too late more than once) all produce good braking and a non-scary satisfaction. On the brakes when leaned over, the R15 is light enough to not sit up and yes, I again must say these are some of best brakes overall on an Indian motorcycle. Ride quality should prove sporty-good too, though the street ride will probably reveal a lot more. I have only two indications to this. The first is the utter composure into the bumpy first corner, where high speeds and bumps come together. And the second is my unerring ability to run the R15 over the sole bad patch on all of the 3.6 km of the track, on every single lap. A patch that arrives when I’m heeled right over on an even throttle; a patch the R15 gives me intimate knowledge of without ever shifting its line the slightest inch. As I told a friend within hours of getting off the motorcycle, this is the bike to go for track days on, and to learn more about the nuances about riding faster, riding neater and riding harder.

The spec sheet, of course, is impressive in itself. One of India’s fattest front forks, India’s first genuine twin spar frame, in steel for the moment. India’s third monoshock bike, complete with the underslung link. It had to be good, right? Yamaha say that doing a double cradle or diamond frame wouldn’t be all that hard. But the minor extra weight of the Deltabox was worth it over and over again in what it brought to the handling. R15, sportsbike? Oh yes, this claim is the real thing.

Thrill
And while I did say the engine’s no earthshakingly powerful monster, I also have to say that it’s a great motor. Let’s start with the spec. It’s easily the most advanced motor we’ve had the pleasure of bouncing off the redline yet (yeah, I was too busy fumbling with the controls to be in the right gear a couple of times). India’s second four-valve motor still has a single overhead camshaft, but it is liquid-cooled for power with, um, staying power. It has fuel injection – you know the benefits already. It has India’s second 6-speed gearbox. And for Yamaha, it has proven reliability – the Indonesian V-Ixion has a nearly identical motor (different exhaust and gearbox) and they’re bulletproof, evidently.   But more than that, it’s an unexpectedly good motor. Peak power (16.8 bhp at 8500 rpm) and peak torque (1.5 kgm at 7500 rpm) may be bunched very close together, and there’s a puzzling 2500 rpm lying north of the peak power. But look, it’s a slightly undersquare motor and once more, Yamaha repeat that the rideability of the R15 was an important criteria for the engine tuning. And you won’t be disappointed. Clicking up the gears while accelerating from the pitlane to join the track at C2 was the only time we saw the whole rev range, and the R15 felt urgent and powerful, not peaky. When you run it up to as high as 10,000 rpm or more, you do notice that the power doesn’t tail off all that much. One of the most important revelations of my time with the R15 at the track was that I could take corners in the right gear, wrong gear, at redline, at 5,000 rpm, with very little difference in chassis attitude and only a mild difference in forward progress. What I’m saying is that I’m not sure what the R15 will turn out on the street. But I’m confident that no one will complain either of a peaky powerband or of too little power.

And what you should also know is that the urgency of the power has another source. The R15 and many of its cycle parts were designed and selected for their performance as well as their contribution to the cause of saving and locating weight. The R15 is 13 kg lighter, with all fluids, than any of the commuter 150s and a whopping 19 kg lighter than the Pulsar 220. The other reason for the weight saving is that the R15 is not a platform. It’s a motorcycle. There’s no extra engineering weight in the bike that’s waiting for a bigger engine to be slotted in later. It’s fat-free. That kind of weight saving produces huge power-to-weight advantages and therefore, great engine performance, even when the spec sheet makes the motor look modest.Yamaha don’t claim any performance figures officially but here’s what I know. A 60 kg rider, prone, should see 140 kph on the R15. Sit up, lose 15 kph... so that fairing isn’t there to ensnare looks either. Acceleration is good and a sub-5 second run to 60 kph should be easy-peasy. And the Yamaha should return between 38 and 42 kpl, should you be a compulsive average anorak.

Milestone
The Yamaha YZF-R15 is a landmark in our history. Yes, I am going to compare it to the RD350, because I do think that the RD350 has, finally, been succeeded. Not superseded, but succeeded. Where the RD350 thrilled us with its abundant power and character, the R15 has that charm, and a level of all-round ability that we have never seen before.But dude, Rs 1.1 lakh for a 150? Let us be clear about this. The Yamaha YZF-R15 is not a 220cc commuter, any more than it is a volume 150cc commuter. What it is, in every sense of the word, is India’s first genuine sportsbike, which happens to have a 150cc engine. It will go racing next year, and trust me, its competition is going be up the creek unless they can come up with something by then. And by God, I do they hope they can beat the effortless, fluent, confident R15. We need more motorcycles like this.

But is it worth the money? I think it is. Value perception for the R15 cannot be blinkered by the standards of the commuter 150. That simply isn’t fair. Explaining how much better the twin-spar is, for instance, in value terms, is very hard to do. But ride it and you will also know that it is hard to argue against. In markets abroad, motorcycles of this level of ability are even more expensive. Besides, if you really want a Yamaha commuter 150, just wait till December, when the great-looking FZ150 comes out.

While I’ll wait for the road test to set my impression of the R15 in stone, I have to say that this is the most impressive Indian motorcycle I have had the pleasure of riding so far. The R15’s focus is far ahead of our two-wheeled lot so far, and as a result, it is far ahead of everything we have.
I know I’ve said this before about other motorcycles that have excited me, But I have never been this excited about an impending road test. Yamaha promise that a test bike is less than a week away, but that’s seven days too many. I cannot wait, also, to ride the R15 back to back with its displacement-peers and price-peers and see how much of a puzzle Yamaha has thrown to its competition.