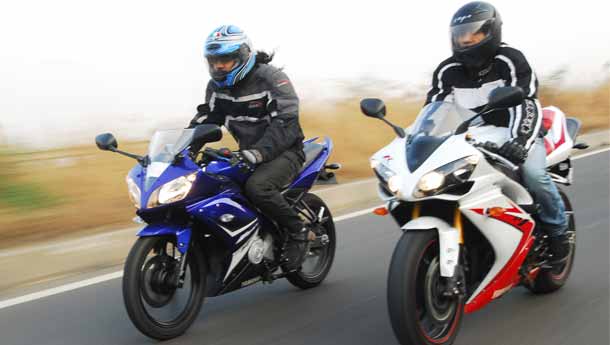 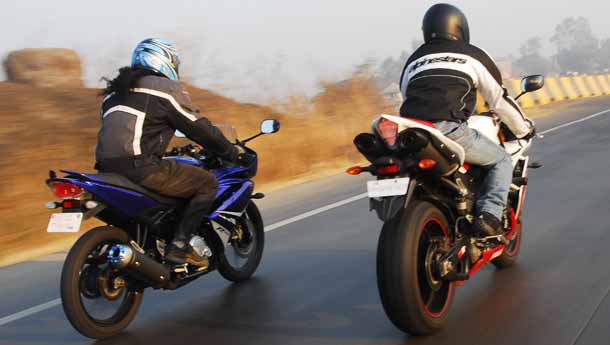 I think I know speed. I know the abandon, the almost reckless sensation that accompanies blurring scenery. My gaze is scanning the road ahead as the R15 tears through the early morning Mumbai smog, the digital meter shouting 135. We’re on our way to meet the R15’s spiritual father, the almighty R1. Right now, watching the gloomy tarmac in the distance disappear rapidly under the R15’s wheels, it’s easy for me to believe that I know speed. But that changed when Rameez torpedoed past, with me at full throttle. In first gear. On one wheel. Speed will never be the same again.

Now, I’m an unabashed Hayabusa fan. A scale model of Suzuki’s flagship occupies prime real estate in my room that is filled to the ceiling with automobile paraphernalia. If I ever muster enough loose change, a 1:1 bird of prey will take the place of the 1:18 model. But the R1 comes a close second. Close enough for the world to go out of focus when I caught my first glimpse of the red-and-white guided missile that you see here. The R1 had been waiting patiently for us to show up, leaning on its stand, its engine humming a tune unmatched by any musical instrument. As I parked the R15 next to the R1, the little blue bike looked almost apologetic for making the big one wait, even as the R1’s four cylinders seemed to say it was quite alright.

The R15 does look like a mini R1. Alright, maybe it’s just the fairing, seeing as it comes with a conventionally placed exhaust can and a tail section that would be at home on a normal 150. Oh, and the Deltabox frame, of course, makes it look more ‘authentic.’ Also, this particular R15 came with cool blue anodised bits all over, including the levers, exhaust can tip and brake fluid reservoir cap among others. The R1, on the other hand, doesn’t even have to try to be cool. Every nut has coolness infused into it at the forging step itself. However, there are other similarities too, in addition to the fairing and the Deltabox chassis. Six-speed gearboxes, fuel injection, liquid cooling, 17-inch wheels and back-breaking ergonomics are the other connections that these two share. And of course, the all-important R badging.   This R1’s plasticwork is tightly packed with four barrel-sized cylinders which house 16 valves feeding four hungry pistons. The R15 makes do with one-fourth of everything. However, seen head on simultaneously, their fairings are almost identical in size! But where you can look at the R15’s headlights and look away, one look at the R1’s piercing projectors, is like looking into the eyes of a King Cobra poised to strike. You’re transfixed, unable to run even though you want to, and you know there’s no way you can stare down this one. Pleasantries exchanged, coffee gulped down, it was time to head to the track… er, deserted stretch of road where we could shoot the bikes. I hurriedly slipped on my gloves, snapped my visor shut and was off, tyres spinning in the loose soil that we were on. I caught a glimpse of Rameez lazily kitting up with a glint in his eye as he watched me scoot off. I had almost exhausted the R15’s straight line potential when, with a colossal blast of sound, the R1 swept past, sticking close to the median on the far side of the road. I almost felt the R15’s shoulders slump, but then again, maybe it was actually my shoulders. What was I thinking anyway?!

The R1 has little regard for the laws of physics that apply to more mundane things; every time Rameez passed for a wheelie shot at speeds approaching escape velocity, this thought was reinforced. And every pass was followed by an angry explosion of sound trailing some way behind the exhausts, almost like a sonic boom. God, what was this thing doing on the ground? Suddenly, the R15 seemed inconsequential, lost in the thunderous wake of the R1’s exhaust. The little 150 is far quicker than almost all Indian motorcycles till date, but comparing it to the R1 is like holding a candle against the sun. However, it’s an eager little thing, pulling strongly in the upper reaches of its powerband, sounding nice all along the way.

However, power is not really the talking point here. The facet where the family trait shines through is the handling. Given half a chance, either one will gleefully devour apexes and gladly let you leave long knee scraper marks on the tarmac. And why not? Both bikes sport Yamaha’s famed Deltabox frames, though the R1’s unit is an aluminium one while the R15’s is made in steel. But, that doesn’t stop the R15 from exhibiting handling characteristics that do its bigger sibling proud. Grip from the chassis is way more than what we have seen on Indian motorcycles so far, and combined with the super sticky tyres and powerful brakes, it does give you scaled down R1 handling.

So, the R15 has the looks and the handling, but does it deserve the R badge? The celebratory burnout answered that question for me. The R1’s howl drowned out the R15’s scream by far, but in the end, both were burning rubber in a cloud of smoke. Both have the same spirit of motorcycling ingrained firmly into them. Riding = fun. That’s the mantra that they live by, justifying the shared tuning fork symbol that makes them family. Both have striking similarities and are, at once, a world apart too. One offers life-changing performance, the other offers a chance to hone your skills. One can make you feel like God, the other will make you pretty religious. One will overheat in traffic, the other won’t.

Yes, by the time we were done with the shoot, the R1’s temperature gauge was going nuts. How do you like your calves? Medium or well done? Well, I like mine the way they are, so I really wouldn’t ride this bike in traffic. That way, the R15 is definitely better to live with on a daily basis, the sole slim advantage it has over its big brother. Soon, it was time to say goodbye, and I looked at the R1 again, flaring its nostrils at me as it cooled down. And I was hooked all over again, as those projectors looked deep into my soul and asked, ‘So, you think you know speed?’