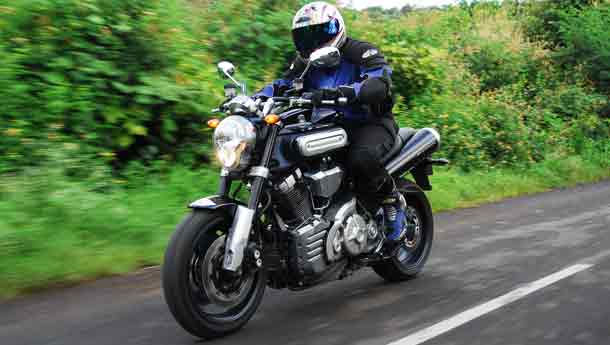 The U-turn is the most dreaded manouvre when it comes to featuring big bikes. Nothing else is as scary. The human brain cannot picture negatives, so when you’re telling yourself, ‘Don’t drop it!’ it is dreaming up image after lurid image of stunningly imaginative ways to drop someone else’s ultra-expensive grovelled’n’mooched bike. Just thinking about it now, seated safely in front of the computer, is giving me the shudders.

The MT-01, and the first U-turn I confidently executed on it, taught me a lot of things about the motorcycle. Usually, I prefer to park and slowly waddle-paddle my way around the turn, taking it slow and in an ungainly way, rather than quick, slick and borderline-oops. So, I pulled into someone’s driveway to begin the turn, made innumerable lifesaver checks to ensure I would not be interrupted and started the turn. It was then that a pack of sleeping dogs woke up to the growling thunder of the MT-01’s stock exhaust and decided to do something about it.

It took them as much time to get near the bike as it did for me to get to the apex. Then they took off. And I, in reaction, opened the throttle quickly. Far quicker than I would have dared if I weren’t being pursued by enraged hounds. The massive 1670cc V-Twin, tuned for torque, instantly broke traction, and within a moment, the 190-section rear wheel was slewing wildly, helping me get the bike turned within a far shorter radius – unintentionally, of course. Wanting to get away before a fang lodged in my precious Oxtar boot, I still had the throttle open fairly wide when the MT corrected and began to spin up towards the other side. Thankfully for me, it hit a patch of dry tarmac instead and we shot off. One moment, I was spinning wildly trying to escape the dogs. The next moment, I heard the feral snarl from the intakes, the metallic ‘braap’ from the exhaust behind me deepened and we absolutely took off! The MT-01 was rocketing forward on a wave of torque that I would not have believed possible, if I hadn’t been haplessly strapped down to the foaming, charging crest. Heart still beating rapidly from the experience, I gently pulled on the brake lever, bringing the beast to a rapid halt. Holy smoke. What do we have here?

The MT-01 began as a non-running proto at the 1999 Tokyo Show. The prototype, many assumed, was the replacement for the venerable V-Max – I’m not brash enough to say ageing, having experienced Mr Max’s rather ripply muscles firsthand a few years ago. The MT-01 concept generated such a buzz that Yamaha engineers didn’t have to be persuaded to go out and see if they couldn’t get it running. You already know what happened afterwards. The motor came from the Yamaha Road Star Warrior. The Warrior, a front-runner in the performance cruiser segment, had a massaged version of the more sedate Road Star’s 1670cc V-Twin motor. An old-fashioned motor, the original V-twin sported massive pushrods, a two-valve head and relatively low compression, displacing 1602cc. By the time it got to the Warrior, it was well on its way to being a regular firebreather. And by the time it was ready to slot into the MT-01’s R1-inspired, similarly sized, but minimally styled (the engine, like the V-Max, was the main styling element) chassis, it was a different sort of beast. The engineers ended up re-doing almost 90 per cent of the motor, including the four-valve head. The new fuel injection system used a single massive throttle body to feed both 11.3 cm pistons, used a seriously lightened crankshaft and a far stronger version of Yamaha’s EXUP valve to complete the unit. The result was a torque monster with a fair top-end, which is a direction no one at the time was taking. And no one still is, as far as I know.Yamaha’s plan was to create a real world sportsbike. While 300 kph, 200 bhp sportsbikes are thrilling to ride and all, you never really get close to their performance envelope. The MT-01 would be the bike that would have the power you wanted and offer the thrills you craved at saner speeds. The engine produced 15 kgm at 3,750, with as much as 14 (which exceeds the peak torques of almost all motorcycles you could name) available all the way from 1,500 to 5,000 rpm. The 90 bhp peak power was almost incidental. The five-speed gearbox was given long ratios to use the torque and at this point, most of the bike was already done. The chassis was custom-built using pressure die-casting (first used on the R6) to create a light frame that all but vanished side-on. The R1’s USD forks went into the triple clamps, wearing the one-unit Sumitomo radially mounted callipers and the rear was the normal monoshock.

The exaggerated styling of the concept’s exhausts was retained (it was, after all, a real world sportsbike, but no need to go all practical, right?) and some minimal lights were added to the back. Out front, a radical new headlamp was given pride of place, one that would cleave through traffic and open road alike, seriously dividing opinion while it was at it. Newer riders wouldn’t mind the headlamp one little bit, but those with well-defined retro-sensibilities will always find the blobby new style a bit funny. Personally, I liked the way it looks. The massive engine and the incredible wealth of sculpting looks quite fetching, though the oil tank on the left front looks decidedly odd. I love the almost cartoon-ish exhaust and the relatively slim pillion pad. All told, if Yamaha were offering a long term MT-01, I’d happily, almost giddily, say yes. Oh, and starry-eyed as I am right now, I must not forget to mention the superb materials, design, finish and build quality on the bike. Easily the best I’ve seen yet – and something that supposedly explains the R1-rivalling price tag.

But what all of that techno-babble hides is the fact that the hefty MT-01 is actually not that large. It might look expansive in the pics, but it’s a stubby little bike. Chunky, but not large. The hefty elements are clustered close together, and the deeply dished saddle more or less defines how you sit in the bike. Swing a leg over, and you lock into position with the same precision as plugging into a child-proof wall socket. Lifting the bike off the stand and slow turns are about the only time you actually notice the 240 kg (dry) weight of the machine.Shifts sound clunky but are positive and the throttle is just beautiful. The MT-01 packs a solid powerpack and the torque is unbelievable and addictive. It is also loud, so no mistaking the speeds you are travelling at either. Open the throttle, and if you haven’t overcooked it and are spinning about helplessly, the MT-01 bolts forward hard, hard, hard. Keep shifting the gears like you mean it, and you’ll be up to its near-200 kph top speed in no time. The brakes are very very good too, and are more than up to pulling up a beast this size when needed. I haven’t seen an MT-01 stoppie yet, but I wouldn’t be surprised – the Sumitomos are that good.

The ride and handling are more of a mixed bag. The properly sporty-rubber has a low profile and tends to get antsy over broken roads. On at least two occasions, the bumpy road had the MT-01 wallowing worryingly. On smoother corners though, I have reason to believe that the MT-01 can tango with much more focussed machinery. Ride quality, predictably, is oriented towards sporty handling and tends to get a bit crashy over really bad roads.

But all of this is the nitty-gritty. The big news is that Yamaha intends to follow the impending R1 launch in India with this bike, the MT-01. We hear that January is the expected launch, and that means the first two CBU motorcycles on sale in India will both be from Yamaha, probably. Abroad, the MT-01 commands the same sort of price tag as the R1, so we’re expecting prices in the Rs 9.5-11 lakh rupee range. Should you be thinking seriously about the MT? If you’re mature enough to realise the folly of a 300 kph sportbike on Indian roads, and just want more cubes without the penalty of vast, unusable performance potential, this could be your bike. It is powerful, controllable, good-looking and yes, as Yamaha wanted it – for the real world. The bike in the pics is a 2006 model. The one that will come to India will be the 2007, which has new 6-piston radial brakes (same as the new R1), new brake fluid reservoirs, smaller usd slider covers (the downward extensions from the front mudguard), new rear view mirrors and more colours (red, white, silver, black and bronze). With the launches of the R1 and the MT-01, Yamaha effectively is pulling a U-turn. Hopefully, the bonkers R1 and the beastly MT-01 will be the milestones that mark Yamaha’s return to form.

Raju Shaikh is a US-trained mechanic who is equipped to handle any and all big bikes. If you need great service or good diagnostics, you can reach him in Pune at +91-98220-58786