Yamaha may resurrect RX 100 in 4-stroke! 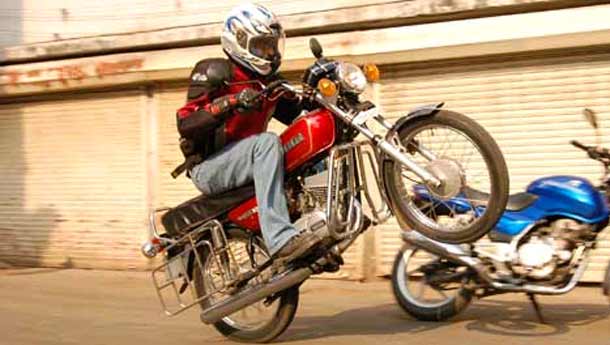 The company is examing various options, such as engine type and styling. However, sources say it would largely maintain the basic design of the earlier vehicle, which drove demand for the company.

Known for its acceleration and agility, the RX 100 was the choice of many young Indians in the mid and late 1980's, after Yamaha (in partnership with Escorts Ltd) launched it in 1985.

Pankaj Dubey, national business head, India Yamaha Motor, said: “We are working on the lines of the RX 100 and are looking to have something of a similar product for India. It will be early to talk about it but we will come out with a product there.”

One reason the RX 100 was phased out by Yamaha was the adoption of stricter emission control norms in the country. The RX 100 was a high polluter. Its two-stroke engine had a problem meeting the required norms, first brought about in the mid-1990s.

Eventually, most two-stroke bike manufacturers either upgraded their models with four-stroke engines or simply terminated production and replaced these with different models. Yamaha opted to shut production of the RX 100 in 1996, as more frugal, fuel-efficient and low on maintenance four-stroke bikes made their way into the market.

However, the two-stroke range were considered special by many owners worldwide because of the higher power option they offered, compared to the four-stroke powered engines. In addition, they allowed riders to ride the bike at very low rpm in higher gears (10 km/hr in fourth gear, for instance).

The launch could catapult Yamaha’s volumes multi-fold if the bike is priced in the same category as other entry or commuter level bikes, says experts.

“It is difficult to find the bike in the resale market, as current owners do not want to part with it. Many bike enthusiasts have asked Yamaha to reintroduce the RX 100, known for its legendary style and performance. If the company manages to do what Enfield did to the Classic model, then it will be a success,” said a motoring expert.

From a share of about 3 per cent currently, Yamaha is targeting 10 per cent market share, or sales of 850,000 units by 2012, when the Indian motorcycle market is expected to swell to 8.5 million from the current 5.8 million (as of the year ended March 2009).