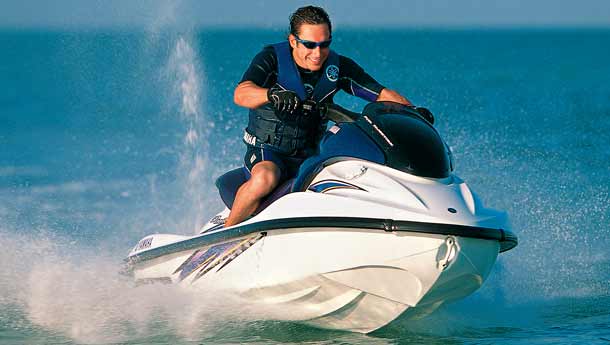 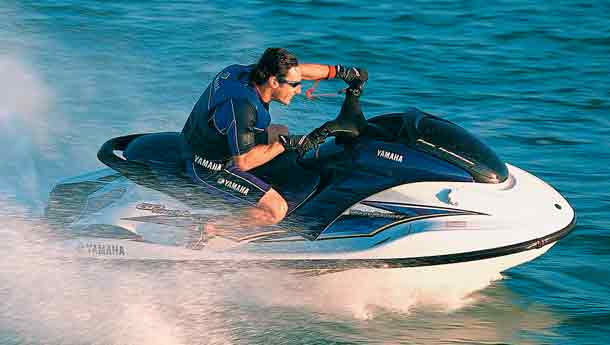 So, who wants to go first?’ With a precision and speed born of years of exemplary classroom behaviour – without appropriate or corresponding academic distinction, I hasten to add – my hand went up. And while the rest of our crew were still in their flowery Hawaiian best, I was already down to the Speedos, lifejacket snapped into place, waterproof sandals cinched tightly. I have only my schoolboy-in-a-comic shop enthusiasm to offer as an excuse. But tell me, if you had the chance to ride, infinitely, a two-stroke powered Yamaha Jetski, with a good shot at getting rid of the fit, tanned Malay boy who was offering to be my guide, would you do any different?

We waded into knee deep water and he said ‘Climb on.’ It could have looked nice to see a giggling 32-year old clambering awkwardly into a listing plastic watercraft, but he held his tongue. When he finished explaining the controls – simple enough actually, gun trigger accelerator control and a wrist strap that plugs into the engine kill switch. Should you fall off, the Yamaha’s engine will die, giving you a good shot at a remount. This is great, because his next question, or rather my answer, caused much hilarity in the local language. ‘Can you swim?’ Er...

There was a holding compound of sorts, and while my fourth estate buddies struggled out of their clothes, I was given a slow lap inside the buoy-ed space so I could acclimatize. When the guide noted that I hadn’t managed to run into any of the other boats or skis, he reluctantly agreed to let me go with one instruction, ‘Go far away... we pick you up if you land in the drink.   So, I point my stumbling, crackling ski at the gates – two orange buoys and do what I do best, pull the trigger. Waaaheeyiii! The thing does a marine impression of a wheelie, stands right up on its jet-laced arse and off we go in a hurry. I am lucky enough to have a digital speedo on mine (I later noted that none of the other Yamahas on offer did) and I see the numbers rapidly cross 40 kph. 40 kph sounds paltry but in choppy waters, it feels very scary indeed. I throttle off and try to make a right turn. It leans just like a motorcycle. Coasting on a closed throttle puts the nose down too far, so an even throttle – not easy with a hair trigger – is what’s needed. But it isn’t turning. I try left, and whoa, the thing turns on a dime. Okay, so my tourist rental jet ski’s run out of right turning ability. No matter, the sea is an open playground, right?

The next forty minutes are a blur. The speedo reads between 60 and 70 kph and we’re flying. I’m loving the ‘wheelies’ and jumps that come from taking a hard left and crossing your own wake. Thwopping hard through a bunch of closely spaced waves and then landing clumsily in the fourth one’s trough is just brilliant, although clumsy. I don’t think I’ve ever ridden another thing that comes this close to the feel of a motorcycle!

Within minutes, I am hanging off into ‘corners’, the left side lean angles steepen until water is washing impudently over the Yamaha’s nose and flowing into the channels where my sandaled feel are making squeaky noises. I’m up on my feet, letting the legs do suspension work as the other skis, now out and running, churn up the water further and make good speeds harder work. I’m still a bit scared of the sheer violence of a good hard pull on the throttle, accompanied by a ripping wail that I haven’t heard in a while, bouncing off the waves, ricocheting around an open ocean like a mad pinball. And the sensation of flying spray stinging into your skin is still alien. But hey, it goes like a shot, heads where you point it, sounds great and look, it leans the right way. I couldn’t fall off this thing.

Finally, I look up to see one of the Malay boys, a pinpoint on the coast, waving desperately at me. I wave back with all the might of the good time I am having. He’s not pleased. He wants me to come in. I come in fast and hard, only letting off the throttle at the orange buoys; water, like sand, is a great one for slowing you down, so there’s no danger of me parking the thing in the speedboat. I coast to a stop, engine dead and he gently scolds me, ‘You not swim, but go real hard, eh?’ What can I say, it felt like a motorcycle, I was home. Then he smiles, ‘Okay, okay. Go drink some water and come back in ten minutes, then you can go out again, okay?’ You betcha!

The photos are of a 2004 Yamaha GPX1300R, not of the craft I actually pottered around in – too worried the camera would get a right soaking.