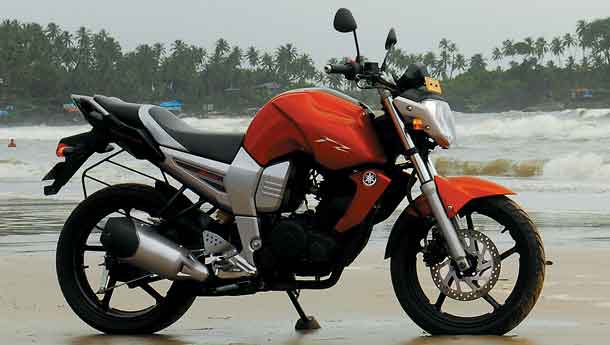 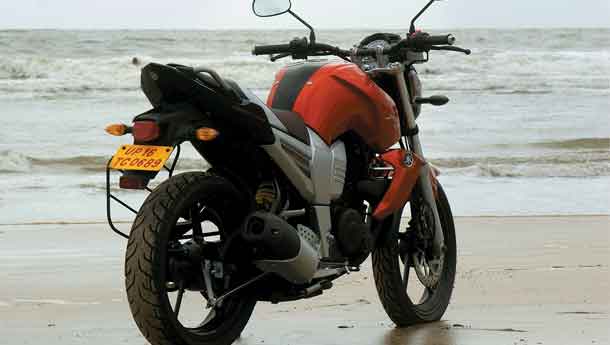 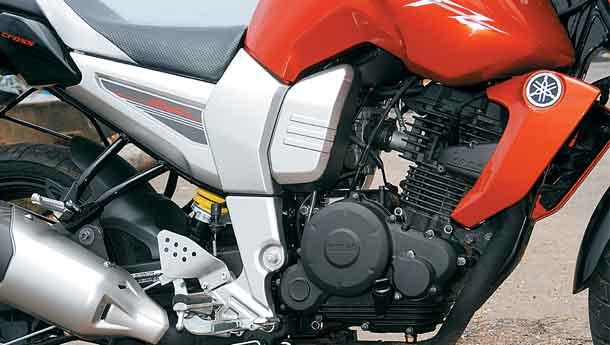 If you have it, you bloody well flaunt it; something faired bikes shy away from. Plastic panels covering the engine are akin to a voluptuous woman draped in a tent. But boy oh boy, Yamaha’s newest offering has plenty of flesh on show!

Having shattered cliché into a zillion pieces with the YZF R15, Yamaha has done it again with the FZ16. The FZ is easily the meatiest looking motorcycle in the market today and is in the ring with the Bajaj Pulsar 150 DTSI and the TVS Apache RTR FI. Tracing its bloodline from the European FZ1, a 1000cc behemoth, the FZ16 design is based on what Yamaha calls the ‘Triple Macho’ concept – muscular silhouette, muscular body parts and muscular chassis.Muscularity is definitely the FZ’s forte. One look at the tank and images of glistening pumped up biceps instantly spring to mind. The sharp contours and the chiselled knee recesses couldn’t be replicated in metal and hence are moulded as plastic covers that wrap around the steel fuel tank. The tail unit, in sync with the tank, proceeds to end in a vicious looking tapered edge with the tail light fitted onto the mudguard slung beneath.

A tapering silver stripe on the seat leads onto a faux metal cover that ultimately extends to the footrest bracket, lending much more brawn to the already bulky diamond frame. A pair of tree-trunk thick forks with inner tube diameters of 41 mm aid in providing the rigidity and damping, while a monoshock at the rear results in exceptional handling. The suspension setup at the rear is a tad too hard on bad roads but this urban warrior isn’t expected to be ridden hard on dirt tracks anyway.   In keeping with the streetfighter image, the engine is on display, and how! The matt black motor is hugged tightly by the frame and a shroud at either end scoops cooling air onto the fins of the engine. At close to 14 bhp with 1.42 kgm of rotary force, this 153cc mill is no puny runt. Tuned for city riding, the engine is extremely punchy at low and mid range but flattens out as the revs and speed build up.We haven’t hooked the FZ16 up with the VBox and so acceleration and other figures aren’t available as yet. Yamaha claims a top speedo indicated whack of 115 kph and during my stint with the FZ in Goa, I managed to push it till 104 kph (indicated) with a bit more grunt still left on tap. We will be putting the FZ through its paces with its peers soon enough, so keep reading!

The riding posture of the new Yamaha is as aggro as aggro gets. The near-flat and wide handle bar with the slightly rear set pegs make it extremely easy to throw the FZ’s weight – rather, lack of it – around.Weighing in at a mere 137 kg (dry weight:126 kg), the front biased FZ is incredibly nimble. Yamaha has concentrated much of the mass towards the centre of the motorcycle. The exhaust routing has been designed in such a way that the muffler sits almost at the centre of gravity of the Yamaha and ends in a really funky looking silencer. Besides looking cool, the mass centralisation aids in improving the stability and cornering characteristics of the 16.

Handling characteristics also depend heavily on the tyres and the FZ doesn’t disappoint in this area. The rear MRF Zappers are India’s first 60 per cent aspect ratio radials and just like the front tyres, are tubeless which makes the FZ less vulnerable to tyre blowouts due to punctures. The tyres grip the road like there is no tomorrow and even on gravel and grit, are quite trustworthy.Good braking is essential for any streetfighter hell-bent on tackling city traffic. The disc up front and the drum at the rear are adequate and bite hard enough with no fuss involved. Sadly, the all-digital clocks disappoint. Although the speedo is great, the fuel gauge is almost tiny enough to give unicellular organisms a superiority complex while the tachometer is hard to read while on the move. The stickering too, is not in keeping with the overall quality of the motorcycle and comes out looking a little tacky. The grab handle rubber fittings on
either end are a little rough around the edges but Yamaha has informed us that they are sorting that out. Also, the fuel tap is placed a little awkwardly and needs the skill of a contortionist with a surgeon’s hands to operate.   Once you hit the road on the FZ and wring open that throttle, these things seem trivial. You can be sure that amongst the current genre of 160s, the FZ will promptly show them its big, fat rear tyre as soon as the lights turn green. The bike pulls away strongly and cleanly and the traffic disappears into the rear mirrors (speaking of which, have stalks that are a tad too short). The mirrors don’t offer much of a view of the road behind, especially when the rider is wearing a jacket. After all, rear view mirrors aren’t really meant to check whether your shoulders have grown in bulk ever since you started hitting the gym.
In the overall scheme of things, Yamaha’s FZ16 is a phenomenal motorcycle that is a sign of things to come. India hasn’t seen the likes of such raw motorcycles that exude sex appeal and aggression, and that’s a good thing. Gone are the days when motorcycles were just another mode of getting your pampered rear from one place to the next. Why just commute when you can bare it all with a wicked grin on your face!