XF 2.2 is the first ever Jaguar to be assembled in India 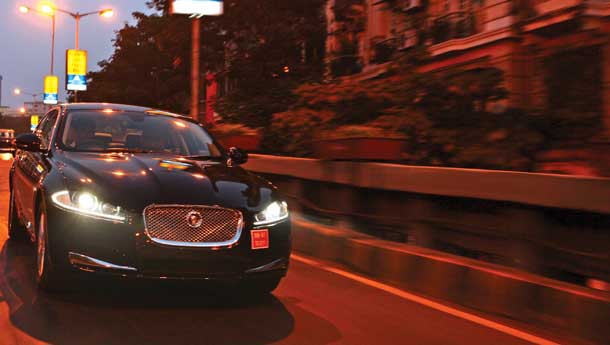 Typically, the evening before I am to review a car is very interesting. Friends are curious as ever to find out if it ‘really is 0.3 seconds quicker than the XYZ 5.2’, which is followed by a long debate over pizza and a few pints. Girls think I’m an active participant in an orgy of fast convertibles and it breaks my heart to tell them ‘Er, actually, it’s a basic diesel hatchback’. Unless it’s some ultra-exotic supercar, I refrain from divulging too many details about the car in question. What’s worse than driving a boring car is, undoubtedly, talking about it. However, even before I drove the Jaguar XF, I kept bringing up the name on one pretext or another. I like saying ‘Jag’ with a sort of bassy drawl. It’s a feel-good thing.

Technically, the XF 2.2 is supposed to be an inexpensive entry into the world of British veneer and leather. It’s assembled in India, as opposed to the 3.0 V6 diesel and the slightly bonkers supercharged XF-R. It is, indeed, the first ever Jaguar to be assembled in the country and that’s a good enough fact to invoke a sense of patriotism in any Indian. First, we buy ’em over, then we get ’em to build one here. Fancy, innit? Now that I have taken the privilege of incorporating a two-paragraph intro to this rather short story, it’s only wise to be objective about it hereafter.

So, the XF now has a 2179cc, four-cylinder diesel motor, one that is also found in the Land Rover Freelander 2. Fortunately, it gets the motor in the 187.4 bhp guise (rather than the 148 bhp version that powers the base Freelander 2) and it’s mated with Jaguar’s new 8-speed automatic gearbox. The XF S (3-litre V6 diesel) produces 271.2 bhp, which means the 2.2 is a massive 84 bhp down on power in comparison. This, however, is the only substantial difference between the two. Yes, there are physical dissimilarities in the form of a single exhaust tail-pipe and high profile tyres (which aid the ride quality, undoubtedly), but when it flies past you, you’ll be hard-pressed to tell the difference.

Step inside and even the most passionate of Jag enthusiasts amongst you will fail to tell the difference between the 2.2 and the V6. It’s almost the same! Now keep in mind that the two variants are roughly Rs 12 lakh (or a top-of-the-line Renault Duster) apart, and you start to see the value of this variant. It’s the same soft-touch everything, the same high-quality chrome, the same gadgetry (SatNav is now standard) and if I’m not mistaken, the same whiff of leather, too. Come on! There has to be a catch!

And there is. Jaguar claims the XF 2.2 can do 0-100 kph in 8.5 seconds, which is a full 2.1 seconds off the 3.0 V6’s claimed 0-100 kph time. But you won’t notice it all that much. It still is pretty quick, and the mid-range is really impressive. What you will notice, however, is the noise it makes. There is no mistaking the sound of that Land Rover diesel powerplant, which is a good thing if you like Land Rovers (I do), but not so much if you don’t. That said, it’s not all that intrusive, and definitely nothing that fantastic audio unit can’t camouflage. Back to the performance, the 2.2 has the same (limited) top speed as any other XF you can have – 225 kph – and that gearbox may not give the Nissan GT-R sleepless nights, but for the sort of driving this car is meant to do, it definitely fits like a glove.

Over most road surface irregularities, the XF is rather plush and surely much more pampering than its rivals, but as the speeds increase, the XF’s soft suspension does add some drama to the mix. It is very stable, however, and like all other Jags, it makes driving feel like an occasion rather than a mock qualifying lap. Translated, if you’re a wannabe racing driver, you’re better off with the BMW 5 Series. Or a Koenigsegg.

All said and done, what Jaguar has achieved with the XF 2.2 is the creation of a far more accessible entry point into the world of Jags. At Rs 46.63 lakh (ex-showroom, Mumbai), the XF is between Rs 4-7 lakh more expensive than its rivals, the Mercedes-Benz E 250 CDI, BMW 520d and Audi A6 2.0 TDI, but you can call it the price for ‘that special feeling’ and the exclusivity you get as part of the package. If you’re looking at the XF with the point of view of buying the best all-round car in its segment, you’ll probably find the Beemer or the Audi more value for money (they’re as well-built, perhaps minutely better, and offer similar performance, too). But if you want a car that expensive to feel special and gooey, your best bet is the Jag. And don’t forget the bassy drawl.