X-trail vs Endeavour - Brawn or brain? 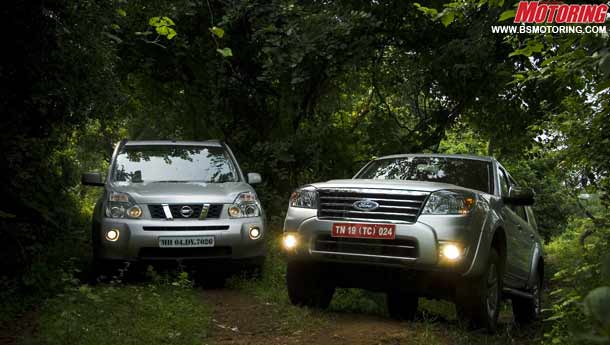 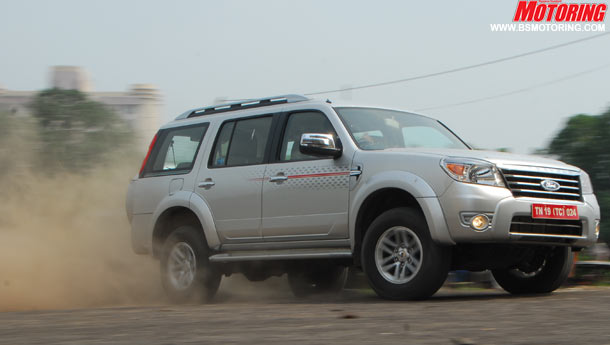 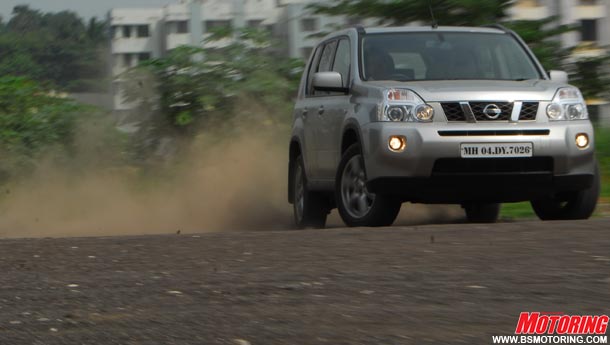 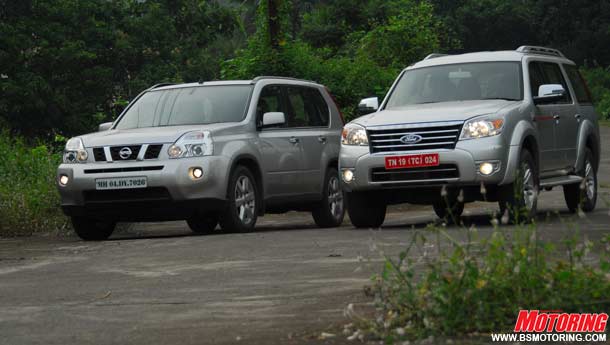 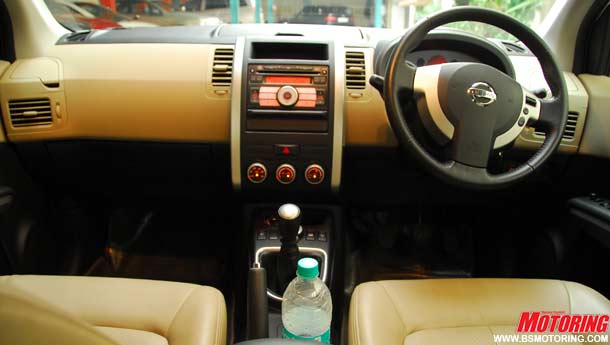 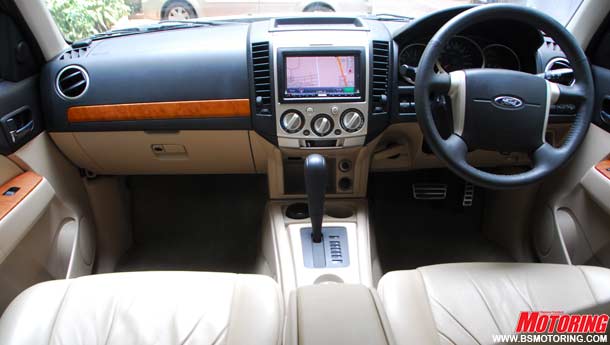 Our road-test editor likes comparison tests. Forever, he is thinking up possible comparisons. For example, if you suggest a new E-Class test, he will want it to be compared with the Audi A6 (see elsewhere in this issue) and when you want to do a Porsche 911 story, he will want to bring in two older generations of Porkers to make the story interesting (in the pipeline for the last 24 months or so!). So when we wanted to test the Toyota Fortuner over a longer period of time, our man, rather predictably, came up with the idea of Fortuner vs Nissan X-Trail vs Ford Endeavour. One thing led to another and the Toyota never came for the encounter, which meant us comparing apples to oranges. Well, so be it, we thought.
If we have to justify this story, in a contrived manner, then it is possible to do so. Both are SUVs, for heaven's sake! So what if one of them is based on a crude pick-up truck and the other is built like a proper car? So what if one behaves like a, er, pick-up truck and another drives like a car? So what if there is a ‘marginal’ difference of Rs 5 lakh in the price that we need to ignore?
Honestly, if you are in the market to buy an SUV to impress the Sharmas next door, then there is nothing to beat the Ford Endeavour. It is big, and in the Indian SUV market place, XXL rules. Buy one even if you are never going to use the third row of seats or its four-wheel drive system and block your neighbour’s parking lot every now and then – only to apologise by blaming the sheer size of your ego - I mean SUV.
The Nissan is more sophisticated but smaller. It looks purposeful but does not dwarf cars parked next to it. It has only two rows of seating and has a capable all-wheel drive system. And, as mentioned earlier, it costs more. Yes, it is smaller and it costs more, dear prospective Indian SUV buyer! You are still reading? Congratulations, because there is a story to be told after all.

Looks
The Endeavour just went through a facelift and emerged with too much make-up on its face. Let us admit it, this is a truck and it is old. The earlier model looked honest and that was going with its character. Now, the rounded off lighting structures try and cover up its age and fail miserably. Fit and finish is good, but not comparable to that of the Nissan. The X-Trail is an evolution of the last generation car – that means it continues with an angular theme, which makes it easy to spot even on a crowded street. The front end is slightly fussy, with lots of parallel lines, but the overall effect is more towards Land Rover than Hummer. We like.   Interior and comfort
Being based on a truck has its advantages and we will come to that later. The disadvantage is that you seat your passengers in the space meant to carry cement, or whatever loads the Ford Ranger (on which the Endeavour is based) was meant to carry. The middle row of seats is too tall and does not offer the comfort of a passenger car. And yes, you need a small ladder to get in and get out too. That said, the big Endeavour justifies its size by seating six people (seven, if the drive is short) and that matters for lots of families in India. The top-end automatic model that we drove featured a rather gimmicky DVD player for the second row of passengers – perfectly avoidable unless you have children who insist on the company of Tom and Jerry wherever they go. The air-conditioning works well despite the volume of the cabin (something most large luxury SUVs in India do not understand).
The Nissan offers a classy interior with quality bits and pieces. Function rules supreme, yet enough allowances to flair ensure that it does not translate to being antiseptic. The quality theme continues with the upholstery and the seats are comfortable and are  expedition-ready. It may seat only four (five at a pinch), but those four adults will not be tearing at each other at the end of the journey. If the X-Trail only matches the interior rating of the Endeavour in this test, it is because of the lack of additional row of seats.

Engine and performance
This is easy. Take two engines, one displacing 3000cc and another just 2000cc, and if the former makes only 4.5 bhp more than the latter you know something is wrong with the former, right? Well, I will blame it on age again. Technology has taken a forward march since the days of the Endeavour motor, which has grown in size so that it can ensure complete combustion cycles and hence meet emission norms – and not necessarily develop more power and torque. At 154.5 bhp and 38.7 kgm, the Endeavour is no pushover. But it is a big, heavy machine and a power to weight score of 76.7 bhp per tonne does not work well in its favour. In comparison, the X-Trail develops 150 bhp and 32.7 kgm of torque – more like a lean, mean, modern common-rail direct injection diesel with a healthy power to weight ratio of 92.1 bhp per tonne. Our X-Trail came with a silky smooth six-speed manual (enthusiasts swear by Nissan’s six-speed box), while the Endeavour used a five-speed auto box to lay the power down. The additional weight of the Endeavour and the inherent laziness of the auto box meant that the acceleration runs were ruled by the X-Trail. A 100 kph run in 11.02 seconds (compared to a tardy 14.28 seconds taken by the Endeavour) is commendable even for a diesel sedan, let alone an SUV. The X-Trail touched 194.7 kph in our road test, making it one of the fastest cars in its class, while the Endeavour ran out of steam at 166.7 kph. As we all know, SUVs are not meant to break land-speed records, so these figures are for academic purposes only.   The Endeavour makes some ground being a more capable off-roader, though. Not that the X-Trail won’t do mud-plugging – it's just that you feel comfortable hitting the trail with the Endeavour. The Ford feels indestructible while the Nissan feels fragile. Period. But as you well know, .02 per cent of luxury SUV owners in India would subject it to a slush-fest the way we do, and what matters more is on- tarmac behavior. We will deal with that next.

Ride and handling
The Endeavour, despite its bulk, rides well on Indian terrain thanks to a beefy suspension set-up. It loves a challenge – especially broken roads, which it canters through. Throw in some gravel paths and the Endeavour becomes fun to drive in the rear-wheel drive mode (read a lashing tail every now and then).  The ‘shift-on-the-fly’ 4WD set-up of the Endeavour dates back to the eighties, but works well. Make no mistake; this is a rugged vehicle that can be trusted over inhospitable terrain, with more chances of you making it than in the X-Trail. On road behavior, though, is not comparable with that of the Nissan. The truck genes of the Ford come through as you throw it around corners at speeds anywhere close to the 100 kph mark. The X-Trail, on the other hand, attacks corners the way cars do and that too without much body-roll dramatics. There is more than a hint of torque-steer, especially when you accelerate suddenly – something you get used to in the course of time. Though the Nissan underpinnings can handle broken roads and potholes better than, say, the Honda CR-V, you do get the feeling that you are going to break something sooner rather than later. What the X-Trail loses on the trail, it gains on tarmac. Points shared? Yup.

Verdict
The Endeavour is more suitable for Indian roads and Indian needs – including the need to be ‘seen’ in a big vehicle. And it is cheaper, making it the machine to buy. Alas, BSM does not have the tradition of sharing victory slots in a comparison test and we have to say that the clear winner when it comes to build, quality, comfort and performance is the Nissan X-Trail. Does it justify the additional money? You bet.