With the Ciaz and Vitara, Maruti finally finds its way to the big league Maruti Suzuki has dominated the Indian car market for decades together: every second car sold in the country comes from its factories. Yet, it was always perceived as a maker of inexpensive small cars; anything above Rs 7 lakh was not its cup of tea.

Maruti Suzuki, which began as a joint-sector company and is now owned by Suzuki of Japan, revolutionised the market with its inexpensive and hassle-free small car, the Maruti 800. Over the years, it came out with several other bestseller small cars: the Zen, Alto, WagonR, Ritz et al.

But as incomes climbed, the demand for bigger cars, executive class sedans and SUVs, began to rise at a fast clip. Maruti Suzuki did try its hand in these categories with products like the Kizashi sedan and Grand Vitara SUV, but its success was limited. As a result, the company had a weak presence in the higher end of the market.

The news is that Maruti Suzuki may have broken the glass ceiling. Some of its recent launches, such as the Baleno (premium hatchback), Vitara Brezza (SUV) and Ciaz (sedan), feature among the top ten bestseller cars in the country.

Maruti Suzuki launched the Ciaz in the second half of 2014. The market was not an easy one as Honda lorded it over with its City.  Another rival was the Verna from Hyundai. It took Maruti Suzuki more than a year to gradually build Ciaz volumes. For several months now it has been the country’s topmost sedan.

This was also the first car for which Maruti Suzuki roped in a brand ambassador: Ranveer Singh. The company also priced it aggressively: below the Honda City. It later introduced hybrid features in the car which opened it for government subsidies and gave a boost to its price advantage. The company sells about 4,700 units of the Ciaz a month in domestic market.

“We are able to attract new categories of customers who were earlier not considering us. The Ciaz has established leadership in the premium sedan segment,” says Maruti Suzuki Managing Director Kenichi Ayukawa.

Another vehicle, the Vitara Brezza compact SUV, launched in March last year, reinforced Maruti Suzuki’s ability to play in the Rs 7 lakh plus price band. It has also emerged as the top selling SUV in the country.

Maruti Suzuki’s effort to establish itself in the premium vehicle category got a leg up with the establishment of Nexa, a separate upscale sales network launched in mid-2015. Starting with a single product (the S Cross), Nexa today exclusively markets the bestseller: the Baleno and comprises one-tenth of the company’s sales.

If Nexa was an independent company, it could have been the eighth largest player in the Indian car market with monthly volume of over 11,000 units. Last month, Nexa got its third product in the Ignis, a product the company has designed to cater to the youth. This will further ramp up the contribution of Nexa to total sales.

One may not call the Ignis a premium product since it begins at a price of Rs 4.59 lakh, but Maruti Suzuki maintains that the ‘premium’ tag has less to do with price and more with style, design and features.
If one has to factor in all the five launches done by the company in less than three years — the Ciaz, S Cross, Baleno, Brezza and now Ignis — all (except the Ignis) are priced upwards of Rs 5 lakh. There has been no new launch in the entry segment where products are typically priced in a range of Rs 3-4 lakh.

The result of all these launches is visible in a sustained increase in the average price realisation per vehicle. In fact, the average unit realisation has crossed Rs 4 lakh for the first time in the company’s history this year. The average realisation now stands at Rs 4.23 lakh, up more than 12 per cent from FY15.

So, is Maruti Suzuki shifting focus away from its traditional bread and butter, the small car? Ayukawa does not see this as a shift. “We have taken this challenge to create newer segments to fulfil the wishes of our customers. If we have to keep pace, we must demolish traditional categories and think afresh, just like the customer is thinking,”

Giving customers what they want

The company says it has over the years relied on customer feedback to introduce new products, create new categories and usher new technologies. The design and R&D team plays a pivotal role in transforming customer feedback into successful products.  Maruti Suzuki says it aims to remain dynamic and expects to meet the customer demand across an array of vehicle categories, which will help it realise its medium-term sales goal of 2 million unit by 2020. (It sold 1.4 million units in FY16.) What really has changed over the last few years? Why did Maruti Suzuki’s earlier premium products failed to click with the buyers? Jagdish Khattar, former managing director of the company, refuses to accept that the earlier Baleno and Vitara were failures. “They were not failures as a product. But they failed in volumes. They suffered due to pricing,” he says. 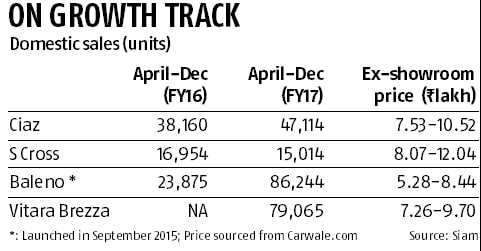 According to Khattar, in the past, premium vehicles were launched either with high imported content or were brought in as completely built units, on which high customs duties had to be paid. This rendered them uncompetitive in the market.

The Baleno was launched after Honda had introduced the City in 1998 and met with a good response. “I was not allowed by the government nominees in the company to price the Baleno lower than the City since it meant losses. I wanted to build volumes and then increase local content to improve margins,” Khattar says.

Highlighting the importance of pricing, Khattar says the buyer is least bothered about imported content or the high import duty on a vehicle. “His only benchmark is the competitor’s price”.

The recent launches are very different in the sense that they come with high localisation of 70-80 per cent and therefore the price tags are aggressive. Being the largest car maker in the country with a portfolio of more than a dozen cars, the company can persuade vendors to supply parts at little or no margin initially and then compensate them as volumes improve.