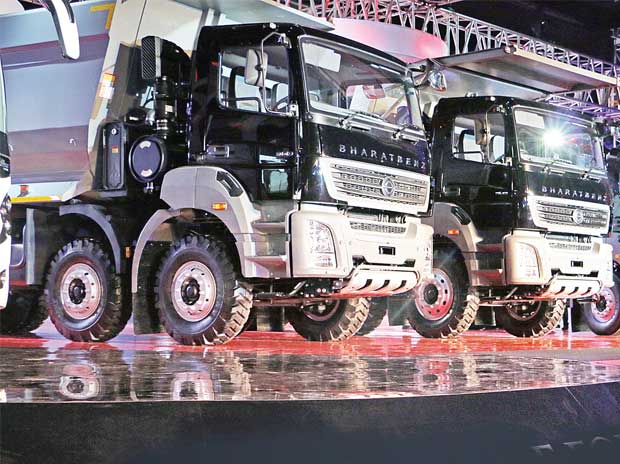 Early this month when Erich Nesselhauf, managing director and CEO, Bharat India Commercial Vehicles launched his company’s BS IV compliant trucks at the same price as the BS III vehicles he phased out, his intent was clear. The company that has steadfastly stayed away from discounting would no longer shy away from a price war with rivals Tata Motors and Ashok Leyland. Also the company has become more aggressive with its positioning; by pitching its vehicles with a ‘profit technology’ tagline and turning the focus on driver comfort, road safety and long term maintenance, it is hoping to keep the premium sheen on its label despite the price wars.

“We have had an interesting journey, we have changed the way trucks were manufactured. In our vehicles, for instance, the driver enjoys the same comfort as one gets in a passenger car,” says Nesselhauf. He believes that comfort, air-conditioned vehicles and ensuring a better driving experience has helped the brand establish its premium credentials. Now, with BS IV norms, as prices look set to go up by 6-8 per cent, the company is cashing in on the opportunity to play with prices without moving away from the premium band. This, DICV hopes, will help staunch the fall in market shares. In 2016, it had 6.8 per cent share of the market as against 7.3 per cent in 2015.


Price as a branding tool


In India DICV makes Bharat Benz for the domestic market and Fuso for exports. Sales took a hit in 2016 when it sold around 13,100 Bharat Benz trucks (2015: 14,000) in India, but exports more than doubled compared to the previous year. Even though the Indian market is expected to grow at around 14 per cent a year (TechSci Research, 2016), industry observers say that there is little room for international players here as this is a segment where price trumps over everything else.


DICV however believes that the numbers in 2016 took a hit because of the challenging environment (demonetisation). But Nesselhauf is betting big on BS IV, which he believes will level the playing field. So far the company has hovered at a distant third with Ashok Leyland and Tata Motors among the top two. Bharat Benz prices are around 10-15 per cent higher than the market average.


By sticking to old prices for its new trucks, DICV will be able to reduce the price gap. But more importantly, it would have used price as a tool to drive the behaviour of its rivals. Analysts and companies have said that the BS IV rules are going to push costs up; rival companies now have to choose between passing this on, or absorbing it to maintain their price advantage.


So far DICV has not played the discount war. Now, even as it does play the price game, the company is keen to be seen as not discounting a premium product. According to industry experts, this is a way to bridge the gap between the premium and mass market without diluting the value of the label.


The new vehicles are being launched with what the company calls ‘profit technology’. Fuel consumption is lower by 10 per cent and maintenance costs, by 15 per cent, the company claims. Modern technology, which offers efficiency and reliability that translates into profitability is what profit technology is all about, says Nesselhauf. “Bharat Benz offers more than steel on wheels,” he says. The new models are BS-IV compliant and run up lower maintenance and fuel bills. Even as the brand does get more conscious about price, it wants to do that without damaging its premium status and hence the focus on technology, customer and ownership costs.


Another feature that the company is using to drive home its premium positioning is driving comfort. Nesselhauf says that DICV engineers have for long focused on driver’s comfort and thereby ensured road safety. “He needs good visibility, good seating and we work to make the driver comfortable,” he says.


DICV says it will use a mix of on-the-ground promotions and digital campaigns to reach customers. It is staying away from traditional media and will continue to build on dealer relationships at dealer meets. The company has also set up mobile dealerships to take the brand physically into places where it has not been before. This is how it expects to build its brand footprint in the coming months.


Social media is a key element of the communication strategy says the company.


It has set up an online community of customers and launched an app that tracks all service-related queries and complaints. DICV claims that it reached more than five lakh users on the day of its launch (the 16-tonne Bharat Benz inter-city coach).


The company says that classic above-the-line initiatives and social media channels go hand in hand. “Social media provides unparalleled reach and customisation potential, while allowing the company to engage users through active dialogue,” the company said. It also appeals to the new digital savvy customer. By providing them with online support at all times at all places, the company is hoping that it can keep them loyal and coming back for more.