At the launch of Maruti Suzuki's first multi-utility vehicle, Ertiga, last year, engineers at the country's largest automobile manufacturer cringed every time they were asked how they thought the petrol version of the car would perform.

Their anxiety was palpable. After toiling for more than a year on an all-new 1.4 litre engine for the petrol version of the vehicle, the car seemed to be stalling at the launch itself. The multi-seater Ertiga was launched at the peak of the consumer tilt towards diesel vehicles - for every five cars sold, only one ran on petrol. The shift in consumer preference stemmed from government-backed subsidy on diesel which made it appear 30 per cent cheaper than petrol. Clearly, the demand for petrol-run Ertiga appeared dire.

"We have worked so hard to develop this new engine that it's tough to accept that consumers might fail to recognise our work," a senior executive from Maruti Suzuki's research & development wing said at the time of the launch.

Left with little choice, automobile manufacturers quickly adapted to the demand: Toyota launched diesel variants of its best-selling Etios and Liva; Maruti Suzuki for its Swift Dzire; Chevrolet for Sail, UVA and Enjoy; Nissan for its Micra and Renault for Pulse. Even Honda Cars, which had built its Indian market on petrol models, began to offer a diesel version for its compact sedan, Amaze.

Automobile makers also shifted their focus to developing more fuel-efficient diesel engines. General Motors, for instance, developed a three-cylinder, sub-1 litre diesel engine (it is the smallest diesel engine ever), targeted specifically for the Indian market. General Motors plonked the new engine, which was developed by the company's research & development team in Bangalore, into the Chevrolet Beat hatchback. Companies also began to think in terms of a new revenue stream by getting into partnerships with other car makers to sell their engines. General Motors, for one, said it was open to selling the engine to other automobile makers, hoping to strike an engine-supply deal similar to an agreement in which Fiat supplies diesel engines to Maruti.

However, if recent trends are to be believed, the market is once again set for an about-turn as a reversal in preference seems to be gathering pace amid the government's plans to withdraw subsidies on diesel through its deregulation programme. From production ratio of 85:15 in favour of diesel 18 months ago, manufacturers have brought the equation down 52:48 in favour of petrol, while for some models it is even higher at 60:40.

"The production and supplies of diesel engines to other companies have fallen drastically in recent months. Demand from Maruti Suzuki and Tata Motors has come down by 50 per cent," says a senior official at Fiat India. Companies are not only offering diesel models off-the-shelf at present, but they are not shying away from offering discounts on them, says an industry insider.

With a Rs 0.50 rise in diesel every month, the gap between the two fuels now stands at just Rs 18 (28.5 per cent. The government intends to close it further. Petroleum and Natural Gas Minister Veerappa Moily recently said that diesel will be deregulated in about six months.

For many, that's welcome news. Tata Motors, for instance, is gearing up for new launches next year. The company will launch an all-new turbo-charged 1.2 petrol engine to be seen in a new hatchback and a compact sedan.

"We have been exceptionally strong with our diesel portfolio. With this (1.2 litre petrol engine), we will also bring in a completely new generation of powertrain. The market is shifting back to petrol, so we want to address the market. Our objective would be to have the same kind of position in petrol as we have in diesel," says Ranjit Yadav, president (passenger vehicle business unit), Tata Motors.

Mahindra & Mahindra, for whom diesel has been the backbone, is developing a new family of petrol engines in partnership with its Korean subsidiary, SsangYong Motor Company. Ford India has already launched petrol variants of its best-selling sports utility vehicle EcoSport with two petrol engine options.

However, having invested huge amounts on setting up capacities and new product development for diesel cars, some companies are at a loss. They are now counting on diesel's fuel efficiency to drive sales. "Diesel models consume 25-30 per cent less fuel than equivalent petrol engines. They also produce less carbon di-oxide," the Society of Indian Automobile Manufacturers said at a conference of diesel organised in Mumbai last week. 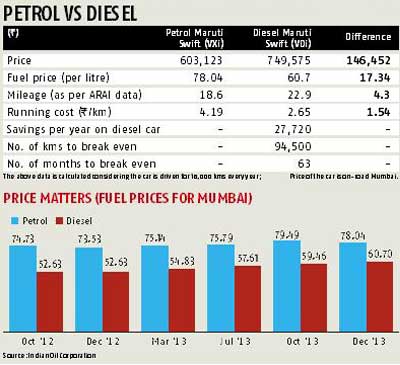 Typically, diesel models command a premium of around 18 per cent in hatchbacks (around Rs 1 lakh) and 15 per cent in sedans (around Rs 1.5 lakh) over their petrol counterparts. While consumers are drawn towards the superior mileage of the diesel variant, manufacturers believe that buyers fail to rightfully asses their needs.

The thumb rule, say experts, is that if the monthly running is less than 1,800 km, a petrol model would prove cheaper in the long run, perhaps over a three-year period, even if the car consumes more fuel than a diesel counterpart.

As the consumer preference for diesel cars ebbs and flows, some automobile manufacturers such as Ford, Volkswagen, General Motors and Hyundai have now set up hybrid engine manufacturing plants capable of producing both petrol and diesel engines on the same line.

Joginder Singh, president and managing director, Ford India, says, "The company will be responsive to all kind of changes. We have invested in flexibility in our factory. So on the same line we can produce a diesel engine and a petrol engine. Our job is to respond to customer requirements, whether it is regulation or the fact that the customer wakes up one morning and says: 'I want a petrol car'."