Why govt is right in making airbags compulsory 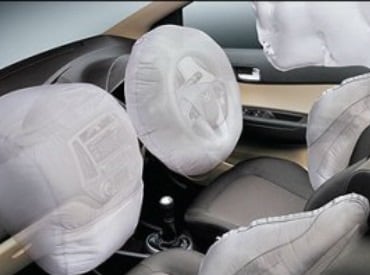 Carmakers’ recent efforts to make small cars safer with optional airbags have received tepid response from price-sensitive buyers who are unwilling to spend Rs 6,000 to Rs 20,000 extra. This is despite the fact that an airbag, along with seat belt, can reduce chances of fatality by up to 80%. Experts blame lack of awareness for this and suggest that much like seatbelts airbags should be made compulsory for safer roads.

The recent debate on safety record of Indian cars, especially the entry-level segment, has attracted a lot attention globally. The Global NCAP crash test results last month exposed poor safety standard among popular entry-level cars like Renault Kwid and Maruti Celerio. While the manufacturers drew criticism for not adhering to international norms, India still doesn’t have such rules in place.

Last year, Maruti Suzuki introduced airbag as an option with two of its most popular entry-level cars — Alto and WagonR. But less than two% buyers have opted for it. In models like Swift and Dzire, which are more expensive, 10-15% buyer chose airbag. These models accounted for 63% of the 1.3 million vehicles sold by India’s largest carmaker in FY16.

C V Raman, executive director (engineering) at Maruti Suzuki said entry segment buyers see little value in airbags. “For entry segment consumers, car is primarily a source of mobility. Since the perceivable value of airbag is quite low, the penetration of airbag option is also low in this segment. However, in higher segments, customers typically opt for highest trims that have built in safety features,” he said. In higher segments, airbags and anti-lock braking system (ABS) are inbuilt. In case of Maruti’s Ciaz and Brezza, over 50% volumes come from higher trims.

Experts say, the reluctance to spend Rs 6,000 for a lifesaving device will only change once airbags become mandatory. Government has mandated that from October 2017, all new passenger vehicles will have to be equipped with airbags to meet crash test norms. Existing models need to meet these norms from October 2019. Prices of cars will also go up.

“Airbag penetration will increase and the increased volumes will help in enhancing localisation. This will further bring down the gap, making airbags more affordable,” said Raman. Of the 14 Maruti models, eleven offer airbag as an option.

Airbags play a critical role in case of a crash as they stop passengers from hitting hard parts of the car in moderate to severe crashes. There are different types of airbags available. Most cars manufactured have driver and passenger frontal airbags. Many newer cars have side torso-protecting airbags and side curtain airbags. Side curtain airbags protect a person’s head in a side impact crash. However, airbags are more effective when the occupants are also using seatbelt. According to some estimates, use of seatbelt and airbag together can reduce mortality by up to 80%.

India’s second-largest carmaker Hyundai has made dual airbags a standard feature across all models of Grand i10, Xcent, Elite i20, i20 Active, Verna, Elantra, Creta and Santa Fe. Its entry-level car Eon does not yet have an option with airbags. “Indian customers are smart buyers and there is growing awareness and need for better safety,” said a company spokesperson.

Some companies offer airbags across models. Toyota is one of them. To make sure that price of entry-level cars do not go up, it removed features like music system from the vehicles. A Honda spokesperson said from April 2017 the entire Honda product line up, including existing models, will have dual airbags as standard equipment.