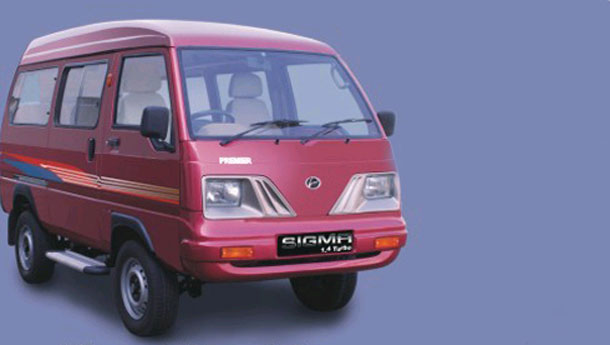 Last month, as I drove down to Pune to drive the Premier Rio, I got into an interesting chat with a senior Premier executive about their commercial vehicles business. He told me that the Premier Roadstar was initially introduced with independent suspension at the front - a first in its segment, back in 2004. The idea was that the company wanted to improve driver comfort levels, and therefore enhance productivity - ala Volvo trucks. The idea, though great had its fair share of detractors, mostly other industry wallahs. They told them that the transport industry always want vehicles that aid overloading, and so they actually don't care about driver comfort, which is why all trucks sports leaf springs at the front.

A year went by and though the Roadstar received a good response, Premier gotfeedback from its dealers that a large section of buyers were staying away from it. Troubled, Premier did a market survey and the typical response was to the effect that 'Sahab, humme aaram ki zaroorat nahin hai. Humme bas do paise kamane hai aur Roadstar ke saath ye possible nahin hai' (We don't care about comfort, we only want to earn decent money, which is not possible with the Roadstar). Taking this customer feedback rather seriously, Premier retrofitted leaf springs at the front, thus taking things back to 'industry standards'.

It's taken precisely five years for someone in the sub one-tonne category to introduce independent front suspension once again, this time it's Mahindra's Gio. While we car denizens have enjoyed the benefits of independent suspension now for over two decades, the commercial vehicles side of the business is still refraining from adopting it. The trade-off between business and comfort has meant lakhs of commercial vehicle drivers continue to try fighting fatigue in vehicles whose suspension design hasn't changed in decades. Even though manufacturers such as Tata Motors and AMW have introduced features like air-conditioning in their trucks, such features are only available in their premium truck offerings. The rest of the country still continues to transport goods in searing heat, without power steering and even a decent seat to sit on.

Try sitting behind the wheel of the hundreds of thousands of trucks that ply on the road and you will want to accept the worst ergonomics found on a car sold in India, rather than these trucks. Every single element that is designed for a large section of commercial vehicles sold in India caters to the sole purpose of supplying goods, and not necessarily efficiently, quickly or comfortably. If a manufacturer builds vehicles that can handle overloading, he's assured of some sort of success. If not, he can kiss his multi-crore production facility goodbye. I remember interacting with Peter Stevens, the man responsible for designing the famous McLaren F1 supercar, who had come down to judge the Cartier Concours D'Elegance in Mumbai.

He spoke about his experience with a north-India based truck manufacturer for whom he was designing a new range of trucks. When the manufacturer saw the final proofs of his design, they requested him to make a small change. They said he should provide for grab handles just below the windshield outside the cabin. Peter asked why, and they said - 'Truckers need them for the cleaning kids to grab on to something while they clean the front-end of the cabin'.

Peter was certainly amused, and it made for an interesting story, but it's a signal of a deeper malaise within our commercial vehicle industry that rewards profits rather than humanity. Hopefully, this time, Mahindra don't have to go back to retrofitting leaf springs on their Gio a year down the line. And maybe show the path for others to follow.