Ashvin Shetty, an automobile analyst with Ambit Capital, started tracking Eicher Motors four years ago when the stock was priced at Rs 1,300. It hit a new record of Rs 21,580 on July 3, two days after the company reported 48 per cent growth in the sales of its Royal Enfield motorcycles in June, and closed at Rs 20,367 on Tuesday. This growth is over 15-fold, way ahead of all other two-wheeler companies. During this period, the Hero MotoCorp stock grew 36 per cent, Bajaj Auto grew 79 per cent and TVS Motors 408 per cent.

"Its volumes," Shetty says while explaining the phenomenal rise in the Eicher Motors stock, "have grown quickly in the last two to three years. The improved mileage and refinement have changed Royal Enfield from a bike for weekend leisure to everyday use. It has started appealing to buyers across age groups unlike earlier when someone in his 20s would not identify strongly with the brand." Above all, he says, it is the commitment of promoter Siddhartha Lal that has made Eicher Motors the favourite of investors.

For Lal, the 41-year-old managing director and chief executive officer of Eicher Motors, May 15 was an extraordinary day. On that day the company became the second most valued company in the Indian two-wheeler space, overtaking the Munjal family-promoted Hero MotoCorp that enjoys a market cap of Rs 51,000 crore. Bajaj Auto remains the most valued two-wheeler maker at Rs 74,500 crore. At Rs 55,000 crore, analysts say Eicher Motors is 'fairly valued'.

In other words, there could still be an upside left to the Eicher Motors story. What keeps the stock ticking? It is its small but firm grip in the motorcycle market. Interestingly, motorcycles contributed about one-third to Eicher Motors' income of Rs 8,738 crore (the rest comes from commercial vehicles) in 2014-15 but accounted for as much as 80 per cent of its profit of Rs 701 crore.

Lal also feels that things could improve further in the days to come. "We believe we are at a very early stage of Royal Enfield's potential. The growth that we have had is on the basis of one family of motorcycles in one market (India)," he says. "In India, we are just about 3 per cent market share of motorcycles. Globally, our share is negligible. We believe we have reached one level and we are working at the next level." 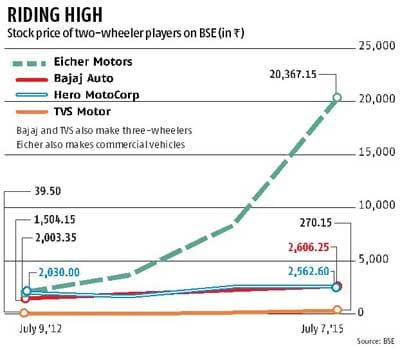 Lal perhaps knows that what investors like more than market share is profit. "We are one of the most profitable companies in the automotive business with no debt and a consistently growing top line. At 22.5 per cent, Royal Enfield's 2014 EBIT (earnings before interest and taxation) margin is better than that of any other motorcycle company in the world," he said in Eicher Motors' latest annual report (2014).

Saurabh Jain, assistant vice-president (fundamental research) at SMC Global Securities, says the market loves a company that always surprises. "Eicher Motors has been surprising the market with its performance for many quarters now. It will remain an investor's fantasy, due to its brand premium, revenue and margin growth".

Steering it on course
Fifteen years ago, when Lal was 26 and had just returned to India after studying automobile engineering in the United Kingdom, he stopped his father, Vikram Lal, from selling the then shaky Royal Enfield business and took the challenge of reviving it. Bikes, which have been a passion for him since he was 18 when his father gifted him an Enfield, also became a business.

Lal has steered the company since 2004, first as the chief operating officer and then as its managing director & chief executive officer. He got down to work by changing the top management, withdrawing discounts and opening company-owned showrooms. In 2005, he sold the tractor business to TAFE for Rs 310 crore to focus on motorcycles and commercial vehicles. The money helped him grow these businesses. Eicher partnered with Volvo in 2008 to expand the commercial vehicles business.

The entry of brands like Harley Davidson and Triumph into India created customer interest in leisure biking but not everyone could afford these bikes. So, people are going for Royal Enfield. "Lal's persistence with the Royal Enfield brand is paying off. Age is on his side and he can take the company to new heights," says Shetty.

Lal has been busy hiring men from global peers to drive the next phase of growth. Rodney Copes, who led Harley Davidson's geographic expansion across emerging markets, has joined to drive Royal Enfield's growth in North America. Eicher Motors has also taken on board Pierre Terblanche who was earlier head of design at Italian superbike maker Ducati.

Foreign institutional investors are seeing value in the company. Their stake stood at 22.07 per cent for the quarter ended March, up from 19.61 per cent a year ago and 12.88 per cent two years ago. Citigroup Global Markets Mauritius has invested in the company over the last one year and now holds 1.04 per cent stake. Washington-based asset management company Cartica Capital has more than doubled its stake from 1.44 per cent to 3.25 per cent since last year.

Royal Enfield enjoys a strong pull in the market: there is a waiting period of three to four months on some of the motorcycles. Lal is now focusing on growing dealership network in smaller towns. "While the big cities continue to grow, we see growth coming from smaller towns as well. We plan to add 100 dealerships in 2015 (it had 400 in 2014 end) and half of the addition will be in smaller towns," says Lal.

Also on his radar screen are exports to the United States and UK. Comparisons with global peers are already being made: in 2014, Lal sold sold more bikes (300,000) than the iconic Harley Davidson (267,000).

What may also help the company is the recovery recently witnessed in the commercial vehicles market. Last month, Eicher launched the Multix, a personal utility vehicle for use by small businessmen. The company invested Rs 350 crore in a joint venture with Polaris to roll out the Multix.