What did it take Ashok Leyland to come up with a customised truck?

If someone asked you what's the relationship between a piping hot pizza and a long-haul truck you would probably be at a loss for words, but for Ashok Leyland Ltd’s (ALL’s) Chief Technology Officer (CTO) N Saravanan, the humble pizza was an inspiration that led to the launch of a customised truck on ALL’s modular business platform (MBP). The new AVTR trucks allow a customer to pick and choose the features he wants in his truck, which could go a long way in improving his operational economics. At the launch, the company said the new model will enable “faster turnaround and better coverage, thanks to virtually millions of combinations”.

With the AVTR, India’s second-largest commercial vehicle manufacturer met the dual challenge of satisfying the BS-VI norms and developing a whole new platform in one swift move, says Vipin Sondhi, MD and CEO, ALL. “The AVTR has the potential to deliver any kind of truck as per the customer’s specific requirement, in a very short time. This gives us an edge not only in India but globally with its potential to switch between right-hand-drive and left-hand-drive,” he adds.

An important innovation in the automobile sector in recent years, albeit restricted to passenger vehicles including four- and two-wheelers, had been customisation. However, till the AVTR was unveiled, a truck customer had to pretty much take what the manufacturer offered because medium and heavy commercial vehicles (M&HCV) have a large number of spares and parts compared to passenger vehicles and customisation was deemed unviable.

That is till the AVTR became a reality. The project, as can be imagined, wasn't a cakewalk.

The company started working on this new platform about six years back and invested nearly ~500 crore to develop it. The biggest challenge in adopting modularity was to jettison existing platforms, which had serious capex implications. The automaker’s early projections showed the whole process to reach modularity would take a minimum of five years. But it was not just the time; the journey entailed a cultural shift within an organisation — from being market driven to being customer driven.

To start with, the firm put together a project team of nearly 400 engineers. The first step for the team was to study the offerings in the global market and benchmark the firm’s own products with those available globally. Study, for instance, the kind of modularity offered by the commercial vehicles of Volkswagen Group’s Scania, which has been at it for nearly five decades now. The next step was understanding the requirements of Indian truck customers and then figuring out the applications that could be customised — including the engine (it now has five customisation engines), power (200-500 horsepower), drive lines, suspensions, cabin types, load body etc — “while sticking to brand's DNA of durability and reliability”, explains Saravanan.

Over the next four years as many as 100 prototypes were developed, vehicles were tested for over six million km with200,000 hours of simulations and 30,000 km of system testing. That would perhaps be the most rigorous testing the CV industry in India had witnessed thus far, say analysts.

The end result? To put it simply, what does the customer get now?

On the AVTR modular platform, a customer can select 600,000 unique truck combinations. The firm has committed to deliver vehicles to customers within two weeks of order placement as the customisation could take some additional time. The company says the combination of the platform and its mid-Nox technology (which controls nitrogen oxide emissions) will offer customers lower total cost of ownership, thanks to lower exhaust fluid consumption, better tyre life, and lower maintenance. Also, experts say, modularity tends to improve a vehicle's reliability and durability. That apart, change intervals of consumables will also increase. For instance, the fuel filter change interval will increase to 80,000 km from 40,000 km now. Many of the parts will now last the entire life of the vehicle. “All this would finally lead to an increase in profitability for the truck owner,” says Saravanan.

Does all of this come at an additional cost? Surprisingly no. Saravanan claims the new platform will not add to the cost of a vehicle though the upgradation to BS-VI engines does add to the cost.

Interestingly, the modular platform has substantially increased the commonality of parts, thereby reducing the overall number of parts that go into a truck to 8,000 from 12,000 under BS-IV. So, for the company, the advantages come in the form of an increase in the speed to market, leaner inventory and lower manufacturing cost due to the commonality of parts — much like the economies of scale that accrue to pizza makers when they churn out the various permutations and combinations with a fixed set of ingredients.

This new platform will also help the company expand its reach in international markets where it is not present currently, thanks to the option of left-hand-drive products. In the modular platform, the company has designed the steering column in such a way that it can be switched between right-hand-drive and left-hand-drive in a jiffy.


According to a Motilal Oswal report, the new platform could be an important driver of market share gain for ALL. The AVTR, coupled with the upcoming LCV launches could expand its  addressable market both in India and globally. "While near-term challenges are deep, ALL seems better positioned to  grow faster than the industry in two to three years," it says.


Mind you, the AVTR models (18.5-55 tonne) pertain to the M&HCV sector and not to light commercial vehicles because it already has a large number of models in latter segment and the sales volumes are lower there than in the former. 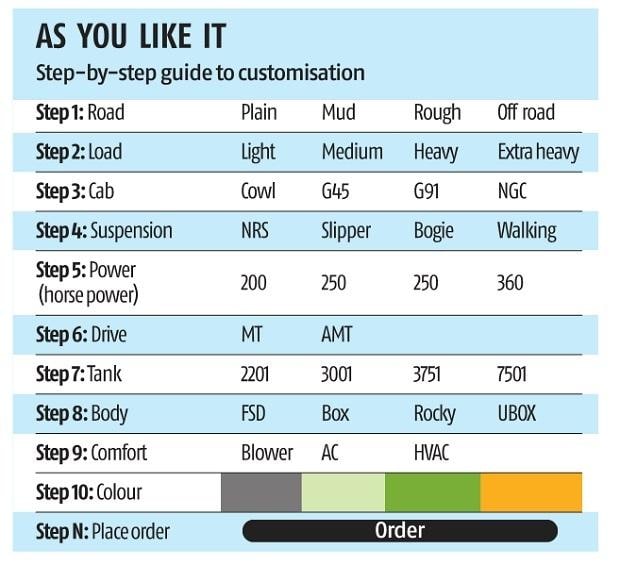