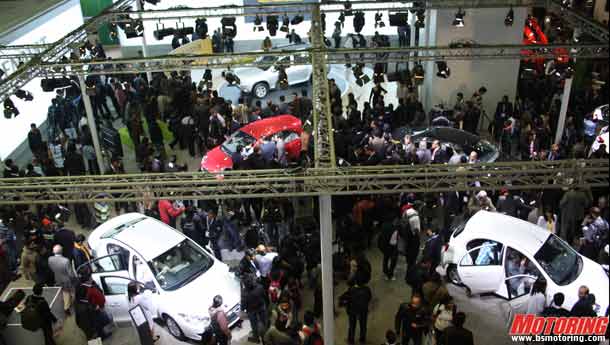 I’m the cheerful, sunny-disposition sort, so I’ll jump right in and rain on everyone’s happy little Auto Expo parade. I’m writing this sitting in Maruti’s nifty little lounge at their hall at the Expo, and it has come as a welcome haven from the rest of the show, which has been a fairly unpleasant experience, to say the least. Allow me to explain why.

The first two days of the Expo (in this case the 5th and 6th of Jan) are set aside exclusively for the media. This is so because people from the press can then do their jobs in an efficient manner, without having to worry about dealing with thousands of visitors. Sounds fairly simple and logical, right? As a media person, you show up, attend various conferences and launches, shoot pictures and footage, file your pieces and then leave. If only that were the case.

This year, pre-registration for media personnel had been assigned to a public relations firm. You had to send them a registration form, and they would do the rest; all you had to do was show up at the venue, collect your pass and go right in. Again, in principal, this sounds simple – the reality was the polar opposite. Despite Srini and I having sent in our forms well in time, our passes are still not in ready as I write this. I had to come to the media centre in Pragati Maidan four times, in between rushing about and attending press conferences, and each time I was told to come back later. Finally, I was only able to get into the venue because I was given a special invitee pass by a manufacturer. Believe me, not having a media pass at an auto show is deeply frustrating – you are stopped at every juncture by overzealous security personnel, trying to prevent you from doing your job.

Trying to get hold of a parking pass was another annoying experience. The issuance of passes was being handled by CII, and despite repeated email requests to the terribly rude lady in charge (let’s just call her J.S), we did not get a single reply. When we phoned her, she cut us off repeatedly. If a prominent private sector body like the Confederation of Indian Industry acts in such a completely unacceptable manner, what hope is there for the PSUs about which we love to complain?

Anyway, you would expect that having got in, we were able to finally go about our jobs unhindered. Fat chance. The various press conferences, spread over two days, were so closely spaced together that it was next to impossible to attend them one after the other, given that these things usually start and end late. Rushing from one hall to the next, in a venue as huge as Pragati Maidan, is very tiring, and at the end of the day, you’re so bushed that you don’t know whether you’re coming or going.

This brings me to the most ridiculous aspect of the Auto Expo, which is that the words ‘Media Days’ mean absolutely diddly squat. Chunnu, Munnu, Bunty, Pinky, their mummy-pappa and their damned gaddi are out in droves, swarming all over the grounds and making the lives of journalists extremely difficult. You can’t get a photo of a car because some fat kid is slobbering over the interior; try and take a vantage position and you’re shoved out of the way by an overfed joint family treating the Expo as a picnic. I actually had some insufferable lady plonk her child on my lap so that he could stand on it and get a better view of a car being launched; at no point in my life have I ever been more of an advocate of birth control.

It doesn’t end there. Members of the public, eager to get their hands on as many freebies and handouts as they can, snatch all the press kits, leaving nothing for journalists (they then throw the press kits away, keeping the bags). At the Toyota hall, I had to get on my knees and rummage through discarded pieces of paper in order to get hold of a press kit; just before that, the Toyota press kit stall had virtually been torn apart by people trying to get their hands on something, anything.

Oh, and members of the press are not without blame, either – in each melee, there’s a healthy contingent of journalists, shoving, shouting, cursing, grabbing, snatching and generally acting in a completely disgusting way. I tell you, if journalists cannot set examples for civilized and orderly behavior, then frankly there’s no point in my complaining about the general public. Still, it has to be mentioned here; as a matter of fact, as I write this, I’m being bothered by a journalist, who’s asking me about the amount of booty that I’ve managed to collect. He’s rather disappointed that I haven’t got anything, because he’s carrying three bags bulging with all kinds of freebies. I just asked him what his favourite car of the show is, and he said ‘Who’s bothered about the cars?’, only in much more unparliamentary language.

Manufacturers also play a part in the chaos, without doubt. At the Yamaha stall, members of the press were prevented from going inside, all because John ‘Biker’ Abraham had showed up. Just think about it for a second. A manufacturer was preventing the press from doing its job, on a day meant exclusively for it, because some stupid celebrity had graced us with his presence. When the blighter left, the ensuing stampede saw several people being pushed to the ground, including a mother and her young child, who shouldn’t have been there in the first place. Apparently, Ranbir Kapoor caused a similar riot when he showed up at the Nissan stall, and The Beard (aka Amitabh Bacchhan) caused such a stir when he came to the JLR hall that nobody could get in, because the entrance was fully blocked up with hundreds of screaming people. Manufacturers, for the love of all things sensible, if you want to show off your celebrity endorsees, DON’T bring them to the press days.

Who is to blame for this mess? We, as journalists, certainly play a part, with unbecoming behaviour, but there’s no doubt that the biggest portion of the blame is to be laid at the feet of the Expo’s organisers. At every single Expo, we see the same story repeated again and again, yet nobody seems to have learnt from the mistakes of the past. I think there’s a reason for this – CII, SIAM and ACMA, the joint organisers, don’t really appear to give two hoots. It’s not so much incompetence as much as it is sheer indifference and callousness – take the money (and manufacturers pay huge sums for their stalls), make life as difficult for everyone as possible and then leave things to their own devices. It’s sad, I tell you – sad. Having got all this off my chest, I now leave you to risk life and limb at another press conference. Isn’t life just grand?