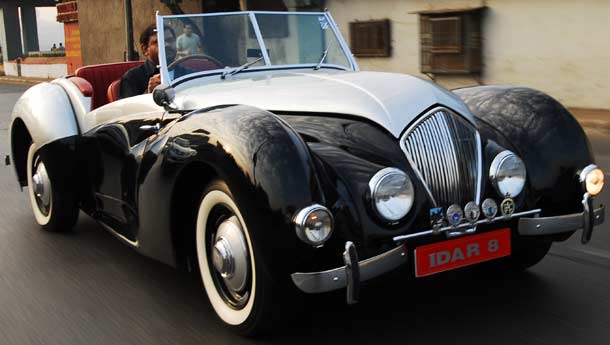 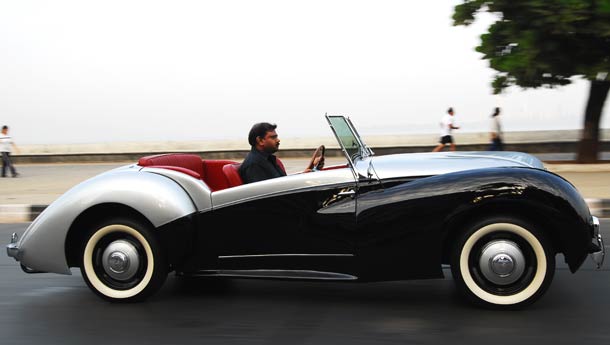 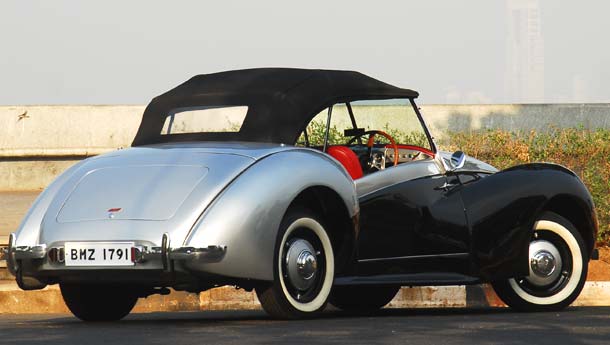 Only 64 units of the Healey-Westland were produced and only one of them is in India. That makes it pretty rare. But try telling that to other drivers on Mumbai’s Marine Drive on a weekday morning. All they know is that there is an old fogey of a machine in front of them which they assume is blocking their way to get to work. Given a chance, I would have told them that the Healey-Westland is no doddering machine and has been engineered by a person for whom driving blisteringly fast was everything. But instead of me opening my mouth, I let the machine to do the talking.

I execute a shift from second to third and the Healey barks, actually jumps one step ahead and then shoots forward, leaving the other cars scrambling in its rorty exhaust. I am sure they simply can’t believe an ancient car can move so well. But little do they know who Donald Healey is or about one of the first cars to bear his name. Shifting to fourth, I add some more distance between me and the rest of the cars. It is breezily roaring past the Art Deco buildings, its bass exhaust notes echoing and waking up the denizens. I am doing well past the 50 mph indicated on the speedo and I could do even more, if not for the traffic police reporting early for work on this VIP route. Oops, up comes an amber light turning to red and I need to shed speed quickly. Most cars of its era are usually lethargic when it comes to braking, but not this. It wears a racing driver’s name, right? So if it can go fast, it can also come to a halt equally quickly. The others then catch up at the traffic light, and so the game begins again.

So what is it about the car that makes it worthy of wearing the Healey name? Several key features actually. Donald Healey knew that power-to-weight ratio was everything, so while he got Riley to give him their 2.4-litre engine based on his specifications, his frame was light Ash wood and the panels supplied by coachbuilders Westland was aluminium. Between the two, he had a car that was light and powerful. Massive Lockheed hydraulic drum brakes stopped the projectile. That’s not all. The front suspension was independent and that allowed a greater degree of driving precision, while attention was paid to all aspects of the car to keep its weight low. But it’s so simple to mention all this in passing, when in fact the Healey was designed to go fast. Very fast. Okay, how fast? How about achieving 60 mph (96 kph) in 12.6 seconds, and a top speed of over 160 kph?

What you see is the Westland roadster, which, driven by Donald Healey himself, came overall ninth at the Mille Miglia in 1948, averaging 66 mph (105.6 kph). And at the same event, the Healey-Elliott (identical to the Westland, but with two-door saloon bodywork, only 110 built) took top honours in the touring class. A few weeks before that, the Elliott had won the Tour of Sicily. Not just that, in the same year, briefly it held the record of being the fastest closed car in the world, having been timed at 104.7 mph (167.52 kph).   Well, I was not planning to check how fast I could go with this car. It was not because the car or its owner were unwilling or that I didn’t have the cojones to see how fast an over 50-year old car could go. It’s simply because this car is so unique and rare. And if you see its pictures before restoration and its concours condition now, you’ll realise the kind of effort Praduman P Asher, its owner, has lavished on it. No wonder then that this car won its class at the first Cartier concours d’elegance held last November.

But how did this exceptional car come to India? The Maharaja of Idar, a princely state in Gujarat, was an aviation aficionado, and according to Asher, even won a flying competition held between the maharajas and princes by the British. I don’t know whether the blue-blood knew about Donald Healey, but he certainly knew about Westland. According to Asher, after the Second World War, Westland – which was in the business of aviation – went into coachbuilding to survive and keep afloat (hence the aluminium body plus of course the shortage of steel after the war). So when the Maharaja heard that the Healey-Westland was launched, he immediately got himself the roadster. The car was languishing till 2003 at Idar, when Asher chanced upon it and bought it from the grandson of the Maharaja. Good for me!

Though it is not exceptional to look at – I mean it’s attractive, but it is gawky and does not have the flawless lines of a Jaguar – it is brilliant to drive. And that’s an understatement. The long hood conceals an engine borrowed from Riley. The 2443cc inline-four with a hemispherical head and two valves per cylinder operating via twin high-set camshafts was engineered according to Healey’s specifications, which included twin carburettors and special exhaust manifolds. Now that translates to a brilliant 104 bhp at 4500 revs and over 18 kgm of torque at 3000 revs. No wonder then that this engine was acclaimed for having one of the highest specific outputs in a production car then. Paired with the motor is Riley’s own four-speed gearbox, with synchromesh on 2nd, 3rd and 4th. It’s a short-throw gearbox with a heavy duty, anti-slip type of clutch, which won’t be out of place in racing cars of that era.   However, the marvel of this engine-gearbox combination is its amazing tractability. At 35 mph (56 kph) indicated on the speedo, the tachometer is barely at the 1500 mark (the tacho needle motion is like the tick-tick of a high-end chronograph). I get to fourth and crawl about on Marine Drive, without the engine feeling antsy. Heck, I could even execute U-turns in fourth! And getting up to speed means just a thrust of your right foot on the tiny accelerator pedal and no downshift required. Who needs automatics when you have an immensely flexible drivetrain like this?

The steering is slightly tough on the arms, especially at very low speeds, like while making U-turns, but once the roadster picks up speed, it eases up. In fact, it eases up a bit too much and it is only when you spend some time driving it that you can give it precise inputs. And when you do just that, the Healey is as easy to drive as any modern car. Besides that, Donald Healey, with the help of his brilliant colleagues whom he met during his days as technical director at Humber – Ben Bowden (body designer) and Achille Sampietro (chassis designer) – gave the car a slightly forward weight bias (55 front: 45 rear). Now that allows the car better braking as well as complete confidence while cornering. Being built around the enthusiastic driver, the Healey-Westland is one with you – for a car from the late-1940s, that’s no mean feat.

The Healey-Westland boasts an independent suspension up front, with dual trailing arms, coil springs and an anti-roll bar at the front and a live axle and coil springs at the rear. The trailing-link suspension at the front was unusual in a production car, mainly because it was expensive in that era and should ideally have been seen only on GP machines. But for imparting the car better roadholding and driving pleasure, Healey considered it necessary. Not just that. The idea of using coil springs at a time when leaf springs were more commonplace again is because Healey wanted to keep the unsprung mass of the car low. And that’s also the reason why the car uses unusually smaller wheels and tyres too. Now that kind of thinking comes only when you want to make a no-compromises driver’s car. At a time when the world was still recovering from WWII, it was a brave thing to do. But racing drivers are known for doing brave things anyway.