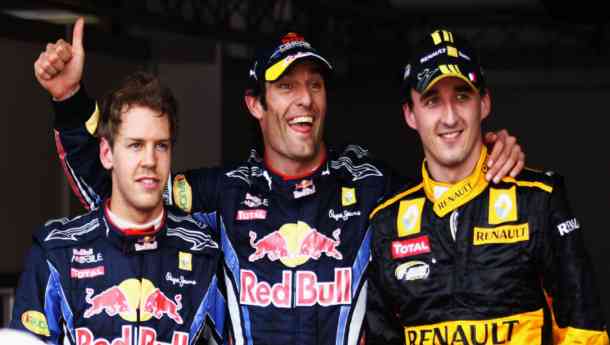 Leading the Monaco Grand Prix from start to finish, Mark Webber became the first Australian to win the Monaco Grand Prix since Jack Brabham in 1959. The Red Bull Racing Driver was followed by team-mate Sebastian Vettel to make it an RBR 1-2, just the second time this season. With six races through, the duo now lead the world championship table with teams McLaren and Ferrari now some distance away.

Of the 24 cars, only 13 made it to the finish line in this incident packed race as the race eventually ended behind the safety car as 14th and 15th placers Karun Chandhok and Jarno Trulli were involved in an incident just three laps before the finish.

For Renault, Kubica's third meant that the podium finishers were all powered by Renault. Five cars powered by Mercedes-Benz and two by Ferrari rounded off the top ten finishers.

Felipe Massa who had qualified fourth finished in the same position as did Lewis Hamilton who had to somewhat nurse his car to the finish line due to brake issues. Fernando Alonso who started at the back of the field drove a spectacular race to finish in seventh, making his way through the field as cars started to peel off from the racing track either due to track incidents or reliability issues. He however lost a position towards the end of the race as Michael Schumacher drove the wheels off his revised Mercedes GP car to sixth in a controversial move on the last lap. However, driver-steward Damon Hill issued a 20-second penalty which means Schumacher is releated to twelfth place, with Alonso retaining sixth. Nico Rosberg for Mercedes GP in seventh and Adrian Sutil and Vitantonio Liuzzi finished eighth and ninth respectively for team Force India.

The provisional standings are as under: