Though the TVS Motor stock is down 30 per cent over the past one year, there could be more downside, given the two-wheeler sector is bracing for its worst annual volume performance in a decade.

While TVS Motor did better than the sector in the June quarter with volumes down a per cent, compared to the nearly 10 per cent fall for the sector, the outlook for the September quarter is not very favourable. Volume fall for the current quarter is expected to be in the double digits.

While most segments posted a growth, mopeds, which account for just under a fifth of the volumes, fell 21 per cent over the year-ago quarter. The management highlighted weak rural sentiment, delayed monsoon, insurance cost and the weak economic conditions for the fall in volumes. TVS Motor believes the second half of the current financial year will be better than the first half, with TVS expected to outperform on the volumes front, compared to the sector.

While overall volume growth was weak, lower input costs came as a relief helping improve the margins. Raw material cost as a percentage of revenues were down 80 basis points over the year-ago quarter, which, coupled with cost reduction measures, helped improve margins.

While volume outlook remains weak, there are multiple headwinds that the company will have to negotiate. The key among them is the transition to BSVI and the impact it will have on volumes, given the price increases that the company will have to take. The company, however, indicated it was ready with the same and would launch it ahead of the deadline next year. The company is hoping for a volume uptick from the festival season and expects the government to reduce the goods and services tax to boost demand.

While market share gains for the company, electric vehicle launch later in the year, and margin uptick are positives, volume growth is key for the stock to reverse the slide seen over the past year. 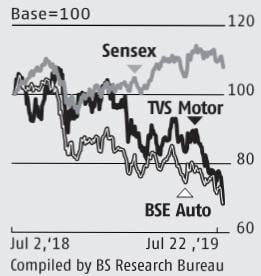