The Motherson Sumi stock has slumped close to 7 per cent in the last four trading sessions. This follows worries that weak demand in key markets, regulatory restrictions related to emissions, uncertainties such as Brexit, and higher investments will impact automakers, including Motherson Sumi.

Given the near-term weakness in demand, plant utilisation and margins are being impacted.


Analysts at Edelweiss Securities believe the commissioning of three new plants has coincided with the near-term demand weakness, thereby putting pressure on margins.

For example, revenues for SMP were down 2.3 per cent on a comparable basis, due to emission norms-related issues.

Margins for the business, too, were down on account of weak operating leverage and the gradual ramp-up of plants. 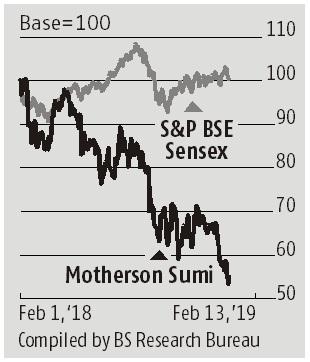 The management indicated that the impact of regulatory issues will last for a couple of quarters more.

The pressure is not limited to its overseas operations. Even in India, the slowdown in demand is impacting operations. After 13 quarters, revenues were down year-on-year by 3.6 per cent.

In addition to weak demand, the lagging impact of copper price pass-through added to the decline.

Stand-alone operating profit margins fell to at least a 15-quarter low of 14.9 per cent. The India business profitability is, by far, the highest among its key businesses, and any weakness in the same impacts consolidated margins.

Despite the challenges, the management has reiterated its $18-billion revenue target by FY20 to be achieved by organic and inorganic initiatives.

On the organic side, the company is considering the ramping up plants this year and contributing to the top line.

While the company is open to acquisitions, high valuations remain an issue, though they may correct given the ongoing slowdown, therefore offering the company greater opportunities.


Given the muted near-term outlook, analysts tracking the sector have cut their net profit estimates for  FY2019-20 by 11-20 per cent, and may even lower their targets if the risks of slowdown increase.

Investors are advised to wait for an improvement in the demand scenario before taking any exposure to the stock.