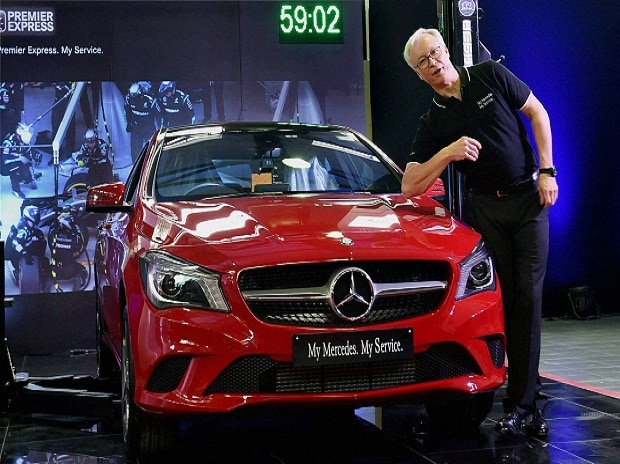 The luxury car market remained sluggish in 2016, with the diesel vehicle sale restriction in the Delhi region and demonetisation's impact. Mercedes-Benz, biggest in the segment, managed to maintain volumes at about 13,000 vehicles. ROLAND FOLGER, managing director and chief executive officer of its Indian arm, tells Ajay Modi demand has returned to normal levels. Edited excerpts:


Has the luxury car market started looking up after two weak months?

Feedback from across the country is positive. The market is showing positive signs of recovery after demonetisation. Enquiries have gone up. Postponement of GST (the national goods and services tax) has also helped since there was an element of uncertainty on how it might impact prices.


You had flat growth in volumes last year. Does 2017 look better?

We are rather bullish about 2017 and see growth in the lower two-digit range. Last year was flat. It appears the overall market declined by four-five per cent. We were a little afraid we'd lose our competitive edge over our German competitors (Audi, BMW). But, we have taken a lead by maintaining sales.


It could be a year of new record volumes if you grow at double digits?

If there is no negative influence on the market by way of a policy change, we definitely see another record year. We have planned highly aggressive product launches and refreshes.


First it was the diesel vehicle ban and then demonetisation. Is the headquarters happy with the performance? What is the message for you?

Germany is happy with us. Even in a market where you have declining trends, we have maintained volume and increased the edge with our nearest rival. It is a good sign. We have learnt our lessons. We are therefore pushing the envelope on the BS-VI emission norm from our side and will bring it ahead of the deadline of 2020. We received a lot of support from Germany in rolling out petrol variants across models.


Is planning your business activities a challenge here?

We've learnt the need to do shorter plans. However, processes and logistics do not let us plan for a period lower than six months for many models. We are willing to take this risk. We see an upside potential. We will deal with any issue that comes up and is unfavourable.


Do you wish to increase localisation?

We started at low localisation some years ago, since we did not have many suppliers here. We've now reached 60% in many vehicles. Beyond that, it requires an additional tax incentive, as it is still cheaper to source a lot of parts from Germany. Seat systems, dashboards, engines…we do locally. We would like to ramp other products up to a higher degree.


Does it not make sense to export from India?

Unless you have a significant shortage of capacity in other countries, that is not possible. India has high taxes. A vehicle we produce here costs significantly more than that made in Germany, due to the scale of operations.


The size of the luxury car market in India remains small. Is that a worry?

We are underselling luxury cars in India as a percentage of the total car market. Many countries have an average of five to 10 per cent as luxury cars. In Europe, about 24% of the market is the luxury segment. Here, instead of 35,000, it should be 150,000, at five per cent of the total market.