VW unveils Vento and other plans 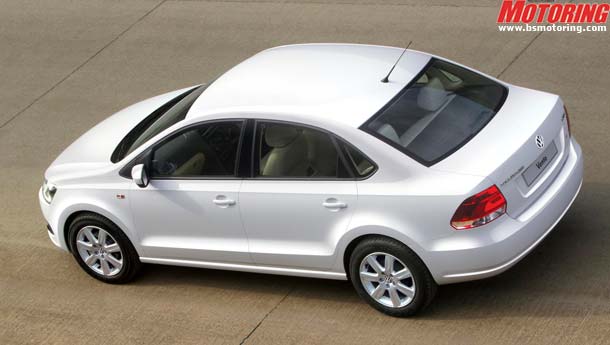 German carmaker Volkswagen (VW) today unveiled the Vento, its entry-level sedan, as part of a plan to ramp up its market share in India.

The company also said it may produce engines in the country to increase localisation of components.

Volkswagen hinted at bringing in more products, including a small car below its latest hatchback Polo, as part of its efforts to expand its presence across the country.

"This (Vento) is the first car which has been designed and manufactured in India," VW Member of the Board of Management Christian Klingler told reporters here.

He said the group, comprising VW, Audi and Skoda, aims to capture 8-10 per cent of the Indian passenger car market, which is likely to touch three million units in 5-6 years.

When asked about the company's plans in the entry-level small car segment, Klingler said: "We have no plans to get into the Nano's segment... There is of course possibility and space for a car below Polo for the Indian market."

He, however, declined to give details on when the car would hit the market.

The largest European carmaker had launched its hatchback Polo in the Indian market at prices ranging from Rs 4.34 lakh to Rs 6.70 lakh (ex-showroom, Delhi).

On the possibility of producing engines locally, Klingler said, "We are strongly committed to localisation and localisation depends on volume. If volume increases, we can think of setting up an engine plant here."

The new Vento, which is being rolled out from the company's plant at Chakan in Maharashtra, comes in 1.6-litre petrol and diesel versions.

Customers can also choose between Ventos with manual and automatic transmission.

After launching its compact car Polo in February this year, the Vento is VW's second car targeting the mass market. It will be positioned at the upper-end of the country's mid-sized sedan segment.

The price of the car, which will be available in the market by the October-December quarter, will be announced next month.

The new Vento is the seventh model from VW's stable in India. The company currently offers compact cars Beetle and Polo; premium sedans Phaeton, Passat and Jetta; and sports utility vehicle Touareg in the country.

Klingler also said that the VW Group could consider bringing some of its premium brands, including Bugatti, into India.

Speaking on its hatchback Polo, VW Group Sales India Member of Board Neeraj Gaarg said the company has sold over 4,000 units of the car in the last three months and the current order backlog stands at about 10,000 units.

VW has invested euro 580 million in its Chakan plant, which has an annual production capacity of 1.1 lakh units. The facility also manufactures group firm SkodaAuto's Fabia.