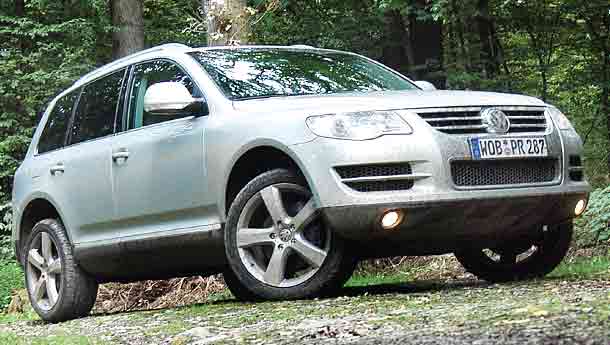 Looks can be deceiving. Take Volkswagen cars, for example. The rather humble manufacturer of so-called family hatchbacks and saloons has corporate insanity as a part of its DNA. Don’t believe me? Well, put an egg below the wheels of the hot 650 bhp Golf GTI W12 and it will emerge scrambled and ready to eat. Then there’s the V10 TDI. I don’t know what were they thinking when they built this engine, but looks like someone told the engineering department at Wolfsburg to build a diesel with enough torque to pull a main battle tank. Er, they went past the brief and it pulled a 170-tonne Boeing 747!

Maybe the German army could just forget buying their multi-million dollar Leopard tanks and instead just plonk a turret on the Touareg V10. Probably it does make sense since the Touareg is quite a capable off-roader too, given that it shares its platform with the Porsche Cayenne. And unlike the Leopard that has never seen speeds past 72 kph, the 231 kph top speed capability of the Touareg would mean the German army can be in Baghdad by breakfast and in Tehran by lunch.

Fighting ‘rogue’ nations is another tale, given this rogue of an engine has been something I’ve looked forward to since my days at management school. Numbers make so much of a difference at that impressionable age that things like body roll and fine chassis balance can feel like Latin. 76.5 kgm and 313 bhp – two figures that have been ingrained in me for all these years. And getting behind the wheel felt like the set of numbers had finally gained a release valve.

Not one, but 20 valves took the 2.6-tonne SUV and one space cadet into the outer reaches of the automotive milky way. The 5.0-litre V10 accelerates so effortlessly that terms like ‘riding on a torque wave’ seem inappropriate for any other diesel. A mere brush of the accelerator, and before you know it, you’ve gone from first to third. Place a black band around your eyes, and you would never ever know you went from third to sixth. Modern automatic gearboxes and the way they flip cogs one after another now border on the surreal. For a slightly archaic 20-valve large displacement aluminium engine, the Touareg’s gearbox is nearly overwhelmed by the block that resides just above it. Not that this kind of horsepower and torque have not been replicated, the 4.2 TDI on the Audi Q7 produces as much torque and little more horsepower and measures in at 800cc less. It’s the smooth power delivery that overpowers the engine block and your mind block. Petrolheads will find it hard to swallow, but this monstrosity is rather sublime. Power delivery is smooth, staccatos it doesn’t understand.

The first signs of hiccup come when you start attacking corners. There is fairly copious amounts of body-roll that take you aback at first. Then you learn to start compensating for it by taking a much tighter line, apexing the corner wherever possible. That’s when you understand that co-developing the chassis with Porsche was indeed a bright idea. Though both adopt independent suspension at the front and rear, the Touareg also has the disadvantage of more weight. Yet, it benefits by the use of double wishbones to compensate for the additional weight. The air suspension now features a sport mode that stiffens the suspension and makes it less perceptible to roll. You don’t realise it until you apex that corner!

The sport mode is just one part of the 2,300 parts that Volkswagen have changed on the 2007 model year Touareg, a mid-life enhancement programme. The more significant ones include a chrome grille, new cornering headlamps and those delectable 18-inch wheels. Those wheels are also a part of the ride quality package – though they are not as thrashy as on the Mercedes ML, but they are not as good as the ones on the Volvo XC90 either. They tend to thump around a bit, a problem that even the erstwhile Touareg was prone to. Somewhere, Volkswagen missed on adding part number 2,301.

What the Touareg doesn’t skip on is pure, unadulterated performance. I had to pinch myself to believe that I had the V10 and a rather empty stretch of autobahn in front of me. ‘Nail the throttle,’ I told myself and before I knew it, I was past warp speeds. It does it so effortlessly, that you wonder what would it take to dial in torque steer. It’s even more jaw-dropping as the heavyweight SUV dispels the 100 kph mark in less than 7 seconds. You might not consider it exceptional, but for something that has the aerodynamics of a brick and is as obese as an oil-tanker, this is stomach crunchingly quick. It pins your head to the head restraint like no other diesel I know of. It gathers pace so quickly, that it just feels as fast going from 100 to 140 kph, as it does going from 160 to 200 kph. Top-end performance for a diesel is just staggering!

Even as you blow past other smaller cars at 200 kph, the NVH levels on the inside are very well controlled. Equally pleasing are also the interiors that distract you from frivolous matters like diesel clatter. Sure enough, there are lots of buttons on that centre console to play around with, enough to keep you busy all day. I particularly liked the interiors that have a sense of purpose, a sense of subdued class and maturity that one barely sees in today’s techno-gizmo laden SUVs. The black leather trim on our test car with dark wood inserts in some places made it look classy. Every bit on the Touareg feels like it’s built to last and I really had to hunt for some cheap scratchy plastic around, which I just couldn’t find.

For all its prowess and mastery, time has caught on with the V10. Time and emissions. It might very well be that Volkswagen might not build another monstrous diesel as Europe reels under stricter emissions norms. Soon, we might have to even bid the internal combustion engine goodbye. Entire generations may miss out on the joy of engine braking and gearshifts, instead have to live with cars that have peak torque at zero rpm from their electric motors. Until such a day, one has the option of buying the Touareg V10 and experience these joys of motoring. This bundle of joy though does cost a packet, with your bank accounts feeling approximately Rs 80 lakh lighter.

It might not have the driving dynamics of a Cayenne or a BMW X5 and neither the presence of a Q7. Nor the brand value of either three. It’s the perfect foil, a Q car (in this case, an SUV) that no one would expect to win a traffic light drag. Like I said earlier, looks can truly be deceiving!