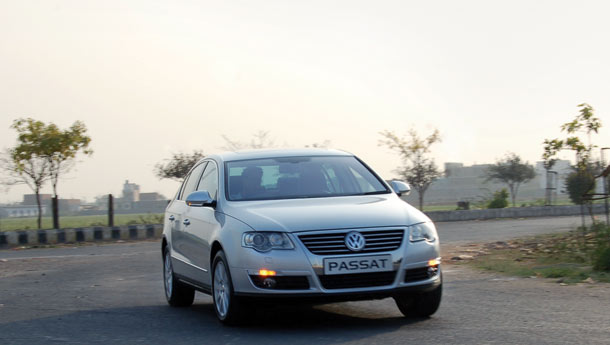 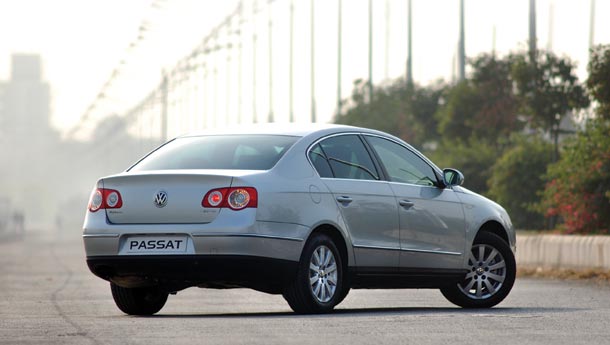 We might be living in a world of equals today but really, it is a world of best among equals. Especially with regard to cars. Today it’s just not enough to have a big, expensive car. Engineering helps, but the most important thing for the moving metal, especially at the higher end of the scale, is the badge on the grille. And no longer is it good enough to have a pointed star on the hood. Nope! Take, for example, Mercedes. The German has been around for so long in India, it has become default high-street furniture. What really gets people rubber-necking is having a moniker that’s as common as Arnold in a romantic comedy.

And therein lies Volkswagen’s biggest advantage. In Europe, the VW guys might have been punching above their weight a bit to compete with Mercedes and BMW. In India though, a late entry helps them tremendously with the exclusivity factor. They are setting up shop here and come December, Passats will be rolling off the production line. Until then, the Passat enjoys a sense of exclusivity, something that it just can’t manage in Europe.

That’s because the Passat for now will be imported by Kashyap Vehicle Works (the Volkswagen dealer) as a CBU. The Passat as a brand  isn’t new. It’s been around for over three decades and has succeeded in glueing 13 million bums to Volkswagen driving seats. Also, Volkswagen owns a lot of badges and it’s no secret that lots of bits are shared between them, something that holds true with the Passat as well.

So, while the most recent Passat, and the first two, all shared their underskin architecture with Audis, this one is based on the stretched version of the current Golf platform. But it’s not something you would be able to tell from the outside. The shiny supersize grill upfront gives it the VW family look while the high shoulderline makes it look pretty hefty. But it’s a rather nondescript shape and dare I say it, not German enough. Side-on it does look a bit awkward and I think this is partly due to the large front and rear overhangs . However, exterior detailing with mirror-mounted indicators, LED tail lamps and just the right amount of chrome is fantastic.

As far as interiors go, the Volkswagen parts bin is pretty shallow. So if you’ve been around Skodas and Audis for a while, you will notice the instrument console from the A8 and dials and knobs from various Skodas. But the concoction of plastic and aluminium facing the driver is heady and shows why cabin quality is a closely guarded VW forte. If you spend a lot of time looking out of your side window when stationary (not while lighting up your rear tyres), the Passat’s interiors are great to spend time in.   The good thing about making so many cars though is that clever stuff from the flagship models sooner or later filters down to the base models. So the Passat gets bi-xenon headlights that turn to shine round corners (like the Phaeton), a disc-wiping function so that the pads rub against the discs at five-minute intervals when the windshield wipers are on. Then, there is a new electric handbrake for which you press a button on the fascia to engage. This feature seems a bit gimmicky, but what it does is to replace the traditional lever between the seats and that does free-up a bit of space. Incidentally, space is something that the Passat offers a lot of and that makes it more suitable for India. Unfortunately,you aren’t going to be able to manage any handbrake turns since the handbrake is connected to all four wheels.

To start the Passat you don’t turn the key,  you merely push it in. While this may seem like something demanded by marketing rather than engineering, the fact that it is now located  higher in the dash means it’s better for occupant safety. What that key powers  up is a 1967cc, 140 bhp Pump Duse engine that’s mated to the six-speed DSG. Stats say that the torque mountain peaks at 1800 rpm, but what’s more interesting is that Volkswagen claims a better  0-100 time on the 140 bhp TDI than the 150 bhp FSI petrol.

Actually, this diesel reminds you of the Skoda Laura particularly because of the characteristic turbo lag. It’s very pronounced and at first it’s woefully sluggish and then suddenly, all hell breaks loose. Performance is concentrated in an extremely tight band while the boost lends it an unintentional sporting edge. With more grunt than Monica Seles, the TDI is rather entertaining and if you’ve had a good day at work the DSG comes in handy to play around with the car’s athletic potential. The car gets to triple digit speeds within 10 seconds and at those it feels as steady and solid as a…well, whatever the German word for ‘rock’ is.

The Passat has a velvet ride that last generation Mercedes engineers would be proud of. In the quest for a premium feel and refinement, the Passat feels slightly aloof and detached from the road. The ride quality is softer than you might expect for a big German car. Refined cruising, more than marked enthusiasm for backroads, is the Passats selling point. Make no mistake, this is a sedan for grown-up drivers who want to have a little fun. It prioritises comfort over sportiness and there’s more body-roll than the keener ones amongst you might like. What is a bit of a killjoy though is the electric power steering that dims the interaction that I would have liked.

So for about Rs 30 lakh, what you get is a rather big, well-equipped German sedan. At that sort of price, the Passat also has one other thing, and that is a lot of capable competition. The exclusiveness might work in its favour but until Volkswagen get their act together and start assembling this car here, it will always be fighting an uphill battle. Once production starts though, the Passat will be battling the Camrys and Accords and that, dear  reader, is when the fun will begin.