VW Passat - Passat and the future 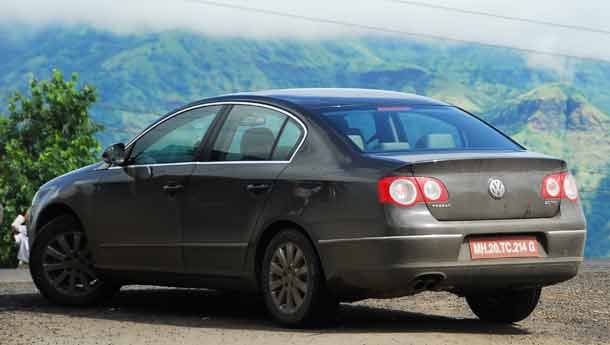 Captain Sachin Ogale points to the accelerator pedals of both cars. Mine, in this case, is the smashing new Volkswagen Passat, and his of course is a 1968 Beetle. Though it wears orange now, the Beetle was painted green earlier and has even starred in our first anniversary issue in January 2000 along with a Daewoo Matiz (Does anybody remember?). ‘Nothing has changed, nothing,’ says Captain. When I look at the pedals of both cars, I understand what he is saying. Both are hinged at the base, are long... and that’s about it. ‘The angle, see the angle. Even today, the angle is the same in both Volkswagens!’ says the excited Air India pilot, announcing the fact to all the other Beetle owners hanging about.

Yes, I agree with you Captain, nothing has changed. The passion is the same, the intensity of love for Beetles and the VW marque remains unchanged. Even being a Beetle owner myself, I don’t think I can summon the kind of passion these fine individuals possess. Captain, Keith, Aditya, Anoop, Kiran, Mahesh, Sidhartha, Deven, Sangram, Karl... I salute you.

For me, it’s an emotionally charged moment – a 2007 VW surrounded by seven Bugs across various years. How I wish Miriam was here with me. Serves me right for not getting my 1960 Bug up and running in time for this drive. Never mind, the next time this group goes out for a long drive, I’ll be there with the yellow love of my life. For now however, another Volkswagen will have to do, a 21st century car that’s dramatically different from the other loveable, huggable Veedubs you see here. Except for the angle of the accelerator pedal, of course.

This, the sixth generation Passat, is as state-of-the-art as mass volume sedans can get. It is so thoughtfully engineered and is so loaded with stuff that I tell people that it’s worth spending that Rs 25-odd lakh on it. That may be big bucks, but after having spent almost two weeks with it, I am convinced that if you have that sort of money lying around, do invest in it. Don’t think that since this advice comes from a big VW buff, it could be biased. Far from it. The Passat is seriously something else.

I could dwell on the little touches that elevate what’s essentially an executive saloon to the heights of cars that are well above its class. The experience VW garnered while putting together the luxurious Phaeton has rubbed off on the Passat, and it shows. The cornering headlamps. The bi-xenons. LED lighting. The high-tech ‘press and drive’ key. The electromechanical parking brake. The auto-hold function. The rain sensor. The electronic seat adjustments for both driver as well as front passenger. The sporty, body-hugging seats themselves. The chilled storage compartments. The way the VW logo opens the boot-lid. The parking sensors. The sunroof. The draught-free ventilation. The blinds for the rear windscreen and rear windows. The useful multi-function display. The way the thick manual is tucked away neatly in the glovebox, accessible by simply pulling a tab. The cavernous boot. The cool retractable cupholders... really, I could go on, but it suffices to say that most of whatever VW knows about making cars as user-friendly and liveable as possible, features in it.

But its biggest party trick is the engine-gearbox combination. The 1968cc, four-cylinder 16-valve TDI motor, which premiered in 2003, develops 140 bhp at just 4000 rpm and over 32 kgm of torque between 1750 and 2500 rpm. While VW’s diesel engines are acknowledged to be the best in the business when it comes to performance, reliability and fuel consumption, the introduction of DSG technology for transmitting power to the wheels has meant that the engine has been through some significant upgrades. Better precision in fuel injection and more effective combustion means that the engine is fuel efficient, more environment friendly, and importantly, allows for more than enough pulling power at low revs. And before you ask, yes, this Passat features DSG. Which means you have the choice of not one, not two, but four options on how you’d like to shift gears – plain vanilla D mode, the quicker S mode, the sequential manual mode and paddle-shift too! Plus six gears to play with.

Insert the funky key, which looks like a miniature Nokia 8250 without the buttons and LCD screen, into the slot and thumb it to start the engine. The diesel motor wakes up with a clatter. Though VW has refined the engine to such an extent that there is no vibration or harshness at all, the noise is quite apparent. Even after the engine warms up, there’s no doubting the fact that this is a diesel car. Driving it in D mode is nice and easy within the city. The availability of most of the torque at the low-end of the tacho means that it is extremely driveable in bumper-to-bumper traffic. And this is where the upgrades to the engine to match the DSG comes to the fore. There is barely a hint of turbo lag and you are never left scrambling behind at the traffic signals – something that often happens with a diesel motor with a conventional automatic gearbox. Or even a petrol engine with one.

And if you really want some enjoyment between traffic signals, slot it in the Sports mode and let it rip. The persona of the Passat in D and S is remarkably different. The DSG senses the urgency, slides down a gear and whoosh!, you are well ahead of everybody else. The shifts are lightning fast, and again, the marvel of the DSG means that you barely feel the downshifts – in any other conventional automatic, the downshift lag is palpable, as if the car is pausing for a deep breath and then letting go. Here, it is absolutely seamless. And DSG is extremely quick compared to conventional automatics. I believe a smooth driver is one who doesn’t let his passengers know he’s shifting gears (I am talking with reference to manual gearboxes, of course), and it looks like whoever has developed the DSG in VW has thought about it on the same lines.

Though the stuff it drinks is of the oily variety, the Passat is quick. It achieves the century mark inside 11.5 seconds and its mid-range, the 80 to 120 figure, is pretty stunning as well, at 8 seconds. And it’s fast too, with its top speed of 206 kph. Well, here is a family saloon that you can take for a hot lap on Sunday mornings with the ESP button switched off when the rest of the world (and your family) is fast asleep.
Heading out of the city, the Passat consumes distances effortlessly. The dual nature of the gearbox means that you can cruise at 100 kph with the tacho needle gently ticking over at 2000 revs, listen to music and arrive at your destination without the feeling that you have travelled a lot. Superb VW build quality means the world outside stays just there and the easy access to torque and horsepower means you’re not tired out. And if you are in the mood, shift to the manual override mode and enjoy the sensation of a torquey diesel motor and a sophisticated gearbox working in symphony for you. This is best experienced on smaller, twisty roads, when you can give the gearbox a thorough workout. Every time you downshift and watch the tacho needle go all hyperactive, it’s highly addictive. Combined with the roar of the motor, it can be good fun. Can’t believe I am talking so enthusiastically about a diesel car, but that’s what it has come to. Well, I am not complaining.

But there is a small problem with the Passat. It is so well-engineered that you’d think it’s a luxurious rear-wheel drive sedan like a Merc or Beemer,while in fact it’s front-wheel driven. So remember that while you attack the curves. A host of electronic trickery and decent 205/55 16" rubber means that the Passat doesn’t lose its composure easily and is a safe and predictable handler. The drivetrain and the chassis are well matched, good enough for you to enjoy the twisties without it getting too hairy. But remember, a sportscar it ain’t. What you certainly won’t have a problem with are the brakes – brilliant stopping power that’s instantaneous and highly effective.

The running gear comprises McPherson struts at front with lower wishbones and a four-link setup at the rear with anti-roll bars at both ends. Volkswagen, like most European manufacturers, seem to have given the Passat the rough road package for India. You know, increase ground clearance, bolster the suspension, etc. What that translates to however is that on good roads, it is very pleasant and the Passat feels at home (home as in Europe). But on slightly bumpy and rough roads, the ride quality is not as good. It does not cushion impacts well enough and here is where it doesn’t feel like a luxurious sedan at all. And this is the Passat’s primary weakness. Also, enthusiasts may feel the steering to be lacking a bit in feedback, and this is more pronounced at lower speeds. But if you are looking at a day-to-day luxury commuter, this is what most people would appreciate – a steering that requires no effort while parking or manoeuvring between B7Rs and Splendors. Still, I wouldn’t mind a little more life injected into the steering setup.

And those are the only prominent bugs in this car. Otherwise the Passat is a brilliant piece of engineering that gives you more than what you pay for. It may not be a Merc or an Audi or a BMW, but it need not be. It is a Volkswagen, and proud of the fact. People who bought 21 million Beetles or 25 million Golfs
or 14 million Passats over the years cannot be wrong.