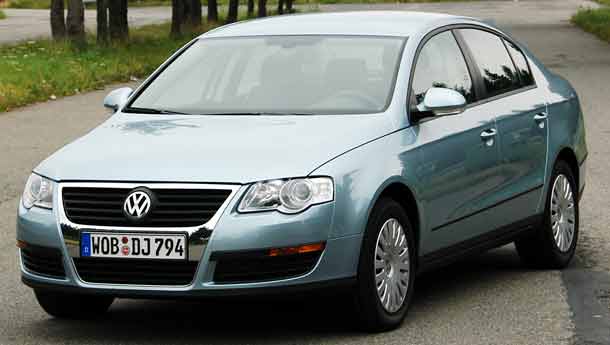 The Volkswagen Passat is not a VW Golf R32. It does not bark, scream and yelp when driven hard. Nor is it an Audi RS4 which was born to give Ferrari owners a serious complex. It isn’t a Seat Cupra Cup racer that goes bonkers around race tracks. It cannot hold a candle to the Skoda WRC challenger either. It will play humble peasant to the mighty Bentley Continental GT. Talk about the Lamborghini Gallardo and the Passat will pee in its sleep. Any mention of the Bugatti Veyron and it will self-immolate or drink some leaded stuff or both.

In short, this is a very normal VW that is sold in huge numbers around the world. Thirteen million to be precise. And in the process, over five generations and 32 years, it has funded the acquisition and development of most brands and models mentioned above. But no, don’t call it a super car.Out on the autobahn leading out of Wolfsburg – the hometown of VW – the light blue Passat that I am driving is indicating a clean 200 kph. I could have been driving an Audi, Merc or a BMW – such was the kind of hushed progress the sedan was making in sixth gear. The 2.0-litre TDI motor thrumming away ahead of me could barely be heard – its voice hidden by wind noise. Life around me looked authentically German – hundreds of VW Golfs, a few Beemers and Mercs and a spattering of Porsches mingling with gigantic MAN semis. The VW Passat blended in. That is what it was designed to do – blend in such a way that it never stands out but still is cardinal to the big picture. It had the pace, grace and technology to hang out with the big league – but without shaming the lesser cars that populated the tarmac.

When the Passat is launched in India on the 5th of September, it will carry a price tag close to Rs 23-25 lakh. Now that is not the price of an ordinary car. A few lakhs more and you enter BMW 3 Series space and some very decent cars are available for much cheaper money. In simple terms, the Passat is what marketing people call a ‘launch pad’ model for Volkswagen in India. This is the car that is supposed to introduce the brand to the new market, this is the car that will establish relationships with the dealers and more importantly, this is the car that will buy time for Volkswagen before they are ready to produce money spinners in a big way. But since my job is to let you know more about the Passat, allow me to stick to the brief.

What you see
The Passat is a handsome car, and the fact that it shares the design language with the best from Ingolstadt is clearly visible. The car received an extensive facelift in 2005 and that means droopy lighting fixtures and a more prominent grille with a large – very large – VW badge. Sure, the fourth generation Passat was more radical to look at thanks to the curved roof architecture, but the new design is definitely sportier and thereby transcends the design brief for an executive class midsize sedan. Forget the overall ‘engineered-blandness’ and get on with details and you will start appreciating the design. I am not a big fan of chrome grille surrounds but the auxiliary turn-indicators sculpted onto the front bumpers and the rear view mirrors did impress me. In profile, with the stylised C-pillar and uncluttered door panels, the car looks more spacious and bigger than it really is. Careful use of LEDs in the taillamps give  the car a certain identity too. I don’t know whether it is me, but there is more than a whiff of the elegance derived out of simplicity as displayed by the first generation Lexus LS 400 in the Passat. Park one next to the flagship Phaeton and you will realise that automotive designers do get to move around freely in the VW Empire. Which is good news, if you ask me.

What you feel
Those amongst you who consider banging a door shut as the ultimate test of build quality are going to be a happy lot. The doors ‘thud’ instead of ‘click’ shut and the famous phrase ‘like a vault’ can be used liberally in this case. Inside, what surprises you initially is the lack of space compared to cheaper Japanese sedans like the Toyota Camry and the Honda Accord. Once you are ready to accept this fact you will notice an abundance of quality, especially in the better trimmed versions. The twin-deck design of the instrument console looks sophisticated and dials are beautifully lit and easy to read. The seats are a revelation indeed and perfect for long hours behind the wheel. It does not take time to get used to the car and it is a clear case of automotive ergonomics at its best. Rear seats are comfortable too and legroom cannot be faulted for a car of its size. Another bit I would like to add is the overall acoustic quality of the cabin and the music system, and I hope we get a similar unit in the Indian examples.

What drives you
VW has learnt a lesson or two from its Czech mates and is introducing the Passat only in diesel guise. The 2.0-litre TDI diesel is one of the most successful engines in the VW range and powers a host of Audis, Skodas and other VW-badged cars. The 1968cc four-cylinder, 16-valve engine breathes through integrated injectors and develops 140 bhp at 4000 rpm and 32 kgm of torque between 1750 to 2500 rpm. Two gearbox options will be available for India – a manual six-speed affair and the newest direct shift gearbox (DSG). Obviously, the combination of the TDI engine and the DSG box makes it a better buy since the powertrain apes powerful petrol engines more than traditional diesel ones. Extensive use of electronics ensures that the engine speed is kept at the optimum, thereby ensuring that you pull off from lower revs more powerfully. More importantly, you will never feel the transmission slip right when you need it to deliver the most power.

I drove the manual transmission Passat over 100 km before shifting to the DSG version and realised that the six-speeder is no lemon either. Gearshifts are positive, and once matched to the torquey motor, you can get the Passat, with two passengers, to accelerate to 100 kph in under ten seconds flat. That means you can do standing km runs in 31.5 seconds, which is brilliant indeed. And by matching these figures, the DSG automatic establishes its supremacy. The manual will run out of breath at 210 kph while the DSG can offer 206 kph when given the road.There was a little bit of mountain road to tame according to our designated route but, alas, the speed limits were in the range of 60 kph to 100 kph. And trust me, most Germans were abiding by those limits as if Big Brother was indeed watching. I didn’t want my photographs to be sent to the VW PR department long after boarding the Lufthansa 747 bound for Mumbai, so I kept the speeds under check.A lot of torque available early in life makes for a fun car that can be driven hard by even those who are not in the habit of being aggressive behind the wheel. In normal autobahn driving, it is important to attain the speed of fast moving traffic as quickly as possible (if you don’t want to be annihilated by monstrous trucks) and that is when the passing speeds become important. I could pull into the fast lane without thinking twice to pass slower cars and get off it before those 911 Turbos growing in my rear view mirrors got a chance to flash their lights. Life in the fast lane – well, it was very much possible with the Passat. In short, performance on demand is what this engine is all about – DSG or not.

What you experience
The Passat for India will ride on 16-inch wheels and will have 205/55 R 16 rubber. And do not be surprised if the Passat offers ride quality that matches some of the established luxury brands in the country. No, I didn’t have bad roads to try out the ride, still. Classic McPherson struts for front and a four-link setup at the rear ensures that the handling is confidence inspiring. Sure, part of the motor sits ahead of the front axle and hence a natural compromise, but we are not talking extreme cornering antics with a four-door sedan in any case, right? However, the speed dependent electro-mechanical servotronic (electronic power steering? Yup!) steering could provide more feedback as you enter the twisties, according to me. It’s important more in Indian conditions than anywhere else since we do put the steering to good use even in an urban crawl. The abundant torque delivery of the diesel occasionally made me think that the Passat is rear-wheel driven and is a tribute to the balance achieved by VW dynamics engineers. At cruising speeds, the Passat can match comparable sedans from Stuttgart and Munich and give a run for their money when it comes to dynamics and comfort on offer. Period.

What you get
All Passats come equipped with ABS, ESP and six airbags (with dual stage front airbags). Electro-mechanical parking brake (that activates only the rear wheels) is also a standard feature that Indian chauffeurs will need getting used to. For close to
Rs 22-25 lakh (we will know the exact pricing soon), you get a no-nonsense, European sedan that is loaded to the brim (especially the top-end DSG variant). This is the classy alternative to the Japanese sedan that you have been driving around but it may not be bigger than that. Since we all know that size matters in India, it will be interesting to see how the Passat is welcomed by prospective buyers. Going by the success of cars such as the Skoda Laura, I guess it won’t be a struggle for new VW dealers to move a couple of hundred cars meant for India in the first phase. The Passat may not be a supercar, but it certainly ain’t no Love Bug either.