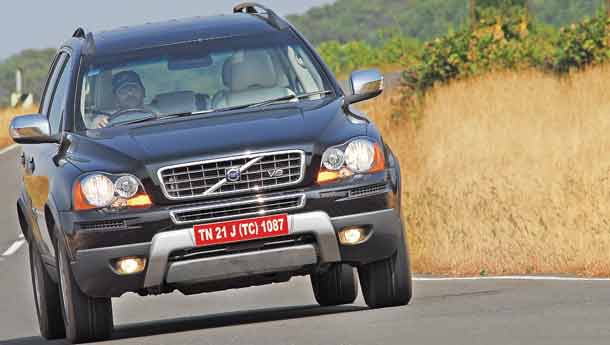 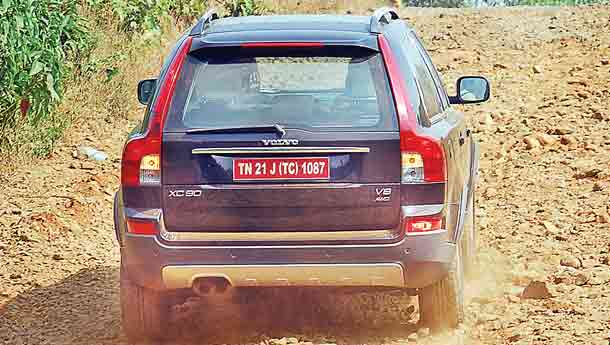 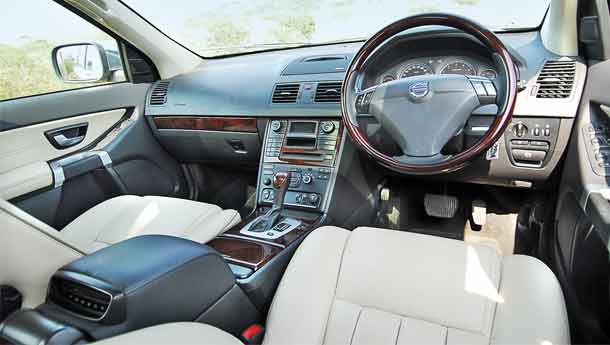 This is an expensive machine for cheap thrills. There’s no arguing with an SUV that’s flashing its headlamps at you when your car is doing speeds above 180 kph. During these moments, you should not be thinking about trivial matters like hey, those headlamps look rather good! or is that the new B7R?, or more pertinently, how the hell can an SUV do THAT? Ignore the questions in your mind, indicate left and please give way. And watch the neat rear of the Volvo disappear on you. You’ve just been XC-ed!

Man made powerful multi-cylinder engines are a thank you gesture to God for giving us fossil fuel. So it’s a shame if you don’t burn gasoline you’ve paid for, the way it’s meant to be. And it’s a bigger shame if you don’t turn up behind unsuspecting cars that are already going fast and wake them from their stupor with a slight paarp. I dare anybody who wouldn’t do that when they have 315 horses to play with. That too, silent, Japanese horses. Japanese? Yup. This V8 has been designed by Yamaha for Volvo, but more of that later. What it does to this straightforward Swede is something else.

Take a look at its road test timings and you’ll know. It attains the century mark in 8 seconds, and shows off a stunning mid-range – 80-120 kph in 5.16 seconds and 100-140 kph in 7.1 seconds. Now that’s about as much as one expects from a powerful, turbodiesel German luxury saloon and not an apartment sized SUV fettled with a host of luxury touches and weighing over 2,000 kilos.   The V8, which was introduced in 2005, was the first eight-cylinder engine in the world to meet those tough Californian ULEV II standards. Despite that, it manages to pull the SUV effortlessly and all that mass is easy work for the motor. Displacing 4,414cc, the 32-valve DOHC V8, featuring variable valve timing and a variable intake system, develops 315 horses at 5,850 revs and 44.8 kgm at 3,950 rpm. Volvo got Yamaha to develop this rather sophisticated engine for them as they were in a hurry and didn’t have the time to do it themselves. But why didn’t they borrow the V8 from Jaguar/Land Rover, their co-brands in Ford’s Premier Automotive Group? Simple, because of installation. All Volvo cars have their engines installed transversely because it allows for more room inside the bay, and consequently, aids better crashworthiness, while the J-LR V8 is designed to be mounted longitudinally. That’s why. While at it, might as well tell you that because of this little factoid, the Yamaha V8 is exclusive to Volvo and cannot be used by any other member of the Ford fraternity! Unless the others shift to a transverse layout, of course. Yes, it was an expensive engine programme for the Swedes, all right.

But was it worth it? Stupid question. Anybody who’s got unleaded (or low sulphur, these days) in his veins cannot pass up the opportunity to drive a car with V8 power. Because V8s are really supreme when it comes to driveability, both within stop-and-go conditions and out on the highway. These engines are immensely tractable and that’s the case here too. Because of the abundance of pulling power, the XC90’s six-speed Geartronic transmission – which would normally sap the juice out of other engines in the Volvo lineup (2.4 inline-5 turbodiesel and 3.2 inline-6 petrol) – does not make a dent in the low speed performance of the SUV. So when you’re caught in the slow morning commute, there’s barely any need for you to press the pedal more than necessary. At barely 2000 rpm, you have over 80 per cent of the torque at your command. And considering our road conditions, even with the needle hovering at around 1000 rpm, there is more than enough torque to make the XC90 dismiss other pesky machines surrounding it.

Once you’ve left the traffic behind, the way the engine transforms the XC90’s behaviour is worth the Rs 52 lakh that Volvo’s asking for this top-of-the-range model. It gathers speed rapidly, as if the slow traffic was a distant bad dream and moves with a velocity that’s frankly a bit frightening. The transition from a city commuter to a subcontinent shrinker is worth a big Whoa!... The first time, the second time and at all times. The engine, which was sedate and serene all this while, assumes a shrill, nasty tone as the horizon comes up in no time at all. At this moment, your palms are all sweaty, the scenery is a blur, your eyes are wide and the speedo is climbing incessantly without a pause. At 210 kph, you decide enough is enough, especially in an SUV and calm down. Phew! And irrespective of the under-confident pedal feel, the brakes work very well, thank you.

Reportedly, during the development stage, Yamaha had made this engine so refined that even at the higher reaches of the rev-range, it would barely whisper. Which is a fine attribute in a Lexus, but in a muscular European machine? Er, no.   So Volvo said we’re fine if some of that engine note does emerge from the tailpipes. Despite that, the noise that you hear is still far from sporty.The XC90 features a Haldex all-wheel drive system. Since it’s based on a passenger car platform (the last generation S80), while driving on straight roads, 95 per cent of the power is sent to the front wheels. But when things get twisty, rough or slippery, up to 50 per cent of the power is sent to the rear wheels depending on the conditions. There’s no upsetting this machine’s poise. It is designed to be so safe that despite the thrilling engine under the hood, the dynamics are tuned towards making the handling predictable and neutral as far as possible. Featuring McPherson struts at front and a multi-link setup at the rear attached to a steel subframe, the XC90’s handling is so balanced that even bad drivers will find it hard to make it lose its composure. Added to that a host of electronic safety bits, and you know that even your chauffeur’s son will end up being careful with it.

What mars the package however are the tyres. The Michelin 235/45 R17 tubeless radials squeal at the slightest hint of pressure and seemed to be bullied by the engine and the chassis to perform. Perhaps they are designed to be more at ease in off-road conditions that they lose nerve on curvy tarmac. Because when we took it off-road, the XC90 took to the rough sections like a natural. It accepted the abuse very well and was in fact fun to pilot. The suspension could smother some of the terrain into submission to an extent and it felt quite nimble all along.

Because it is built on a passenger car platform, I expected the XC90 to be more car-like and less SUV-like. To a fair extent, it manages that – it’s a decent off-roading SUV when you leave the tarmac behind, with its adequate ground clearance and all-wheel drive, and drives and behaves like a car for soccer moms to vote it the best SUV in the world. Its size (and the innumerable awards it has won) is not something that weighs down the XC90 and that bulk seems to admirably disappear when the curves appear. It features a low centre of gravity, which means that body roll is well controlled.

Still, I could have done with a bit more driving pleasure. For instance, the steering is designed to make your chauffeur (that man again) happy. It is easy on the hands and no effort is involved in moving that mass. But if you sack him and have to hit the hills for the weekend, you’ll want some more feedback dialled in. Irrespective of speeds, it barely seems to load up, making you think that you’re driving a small car instead. Don’t mistake me, the steering is precise, it’s just that some feedback is missing. Then, there are those seats. I understand that Volvo puts in millions of dollars into making the ideal ones, but I ended up adjusting my bum ever so often during the entire day I was driving it. The driver’s seat has those gazillion adjustments, yet shifting my posterior to get back to my original position was a bit too frequent. (Is it my bum? Is it the seat? We can keep arguing, we’ll never hear the end of it! Ha ha ha!).

But there’s no arguing with the rear seats. For an SUV, they are very comfortable for rear passengers. Plus this version came with LCD monitors with wireless earphones and a host of other kit to make rear passengers happy. The XC90 we tested is top-of-the-line, so it comes quite loaded with other stuff too. The interiors are ergonomically designed and are top-notch when it comes to quality. For all the flamboyance of the exterior design, the interiors are almost non-controversial and sedate – pure function over form and very, very European. On the outside however, it is diametrically opposite. The XC90 is a good-looking SUV, broad shouldered, confident and muscular... and expensive to look at, too. In fact, in Mumbai, it was subject to the attention of a TV star, with people clicking pictures of it with their cellphones (or was it me?). This, in a city that has its fair share of exotica. The XC90 is not cheap, at least not this version. You can get the D5 diesel for Rs 45 lakh, while this one is Rs 7 lakh more. Judging by the reactions of the have-nots, it’s perceived to be worth more.

However I have a recommendation for Volvo India. Let them keep the D5 and the petrol 3.2 as it is. But for the V8, they should give it their Sport package rather than the Executive. This one comes with a specially tuned chassis, with firmer shocks, stiffer anti-roll bars and yes, a better Servotronic steering too. The Sport version comes with other cosmetic and functional bits too, that makes the version stand apart from the regular XC90. Now that will do full justice to Yamaha’s efforts. It will be the XC90 that says boo to other SUVs, ecoweenies and tightwads... cheap and not-so-cheap thrills guaranteed!