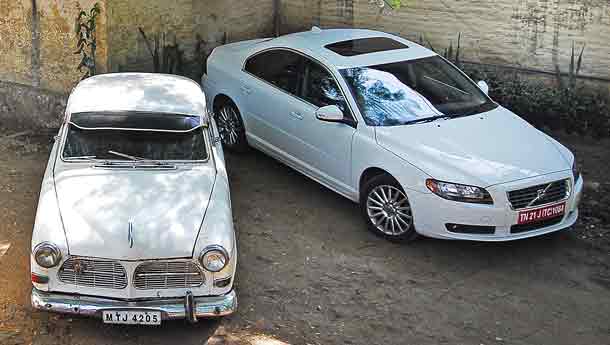 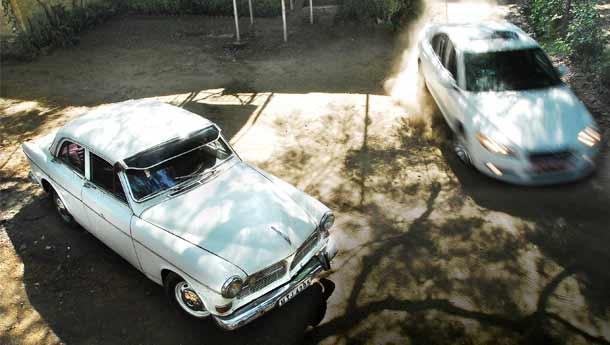 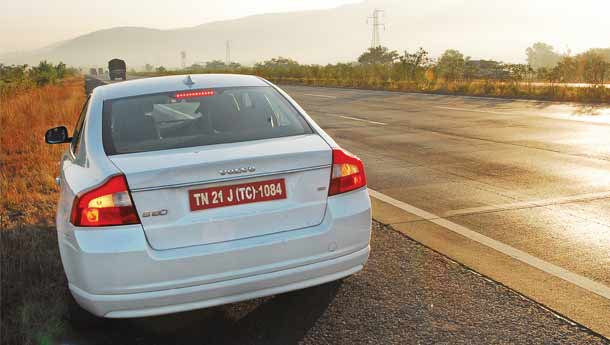 Mr Jaswant Krishnayya will be pleased to have you guys over’, said Karl Bhote, our unofficial vintage car bible, er... guy. ‘There’s just one little problem,’ he continued, ‘We’re going to have to start MTJ 4205, his Volvo Amazon, type 122...’ Okay Karl, we get it. ‘Right. So, I’ll get a battery, and you guys get down here in that modern [we swear he almost said ugh – to modern, not volvo] Volvo you’ve got.’

So, Pablo (shutter-finger), Joshua (greasy nails) and me (typist) drove our shiny new S80 to resurrect the fabled Krishnayya Amazon. A car that the man drove out of the Gothenburg factory himself when the world was still sepia-toned, toured all over Sweden and the Americas before logging its many Indian miles.

But the fun began even before we actually turned up to eye MTJ 4205, er... the Amazon. I am not making this up. The petrol pump attendant squinted at the logo on the grille, grasped the information, looked me straight in the eye and asked, ‘How many does this Volvo seat?’ Joshua, our resident pat-reply man, said, ‘Arrey boss, this isn’t a bus. It’s a car, so it seats only four.’ I think we laughed out loud for the next three kilometres or so.It was funny. And insightful.The bus guys have so deeply occupied the average Indian’s mind that the car guys are going to have a steep uphill battle. I’d say the Volvo truck and bus concern have done BMW, Audi and Mercedes-Benz a favour. But let us look at the S80 first, then we will return to this ticklish issue.
Styling & Design
To be completely honest, the S80 isn’t a car that will guarantee second glances. It does have a subtle, understated, Scandinavian appeal – there’s the famously functional and straight-forward design language the scraggy, snowy top of Europe is famous for, but little else. Most people who noticed the Volvo (as in those that didn’t think of it as a super-cool minibus, heh heh), I think, noticed the size of the car, and a familiar logo, period. Personally, I quite like the way this car looks. But if I were spending Rs 42 lakh, I’d certainly like more design flair.

I do like a couple of details, though. I love the jutting lip of the front bumper as well as the shark fin antenna (although, that was originally a BMW detail). I also like the simple, multi-spoke wheels. Sorry, but I don’t fancy all of the new-fangled high-design wheels that would do Dub proud.On the other hand, the Amazon isn’t a three-box car that is actually a composition in three boxes. Which is sort of what Josh, for instance, was expecting. Karl’s had the Amazon-lust on for a while and recounts that while Mrs Krishnayya attempted to teach him the finer points of playing the piano, our man was lost in the spare grille that resided on the side table. And now I can see why. Despite the accumulated dust and leaves, the Amazon is beautiful. Jan Willsgaard designed this car and while it isn’t Alfa Romeo curvaceous, there’s a simple flair in the design that is unmistakable.

There isn’t a single flat surface on the car. The raised hood, voluptuous waistline... it’s got more charm and character than our S80. And just like the S80’s shark fin antenna adds a touch of class, the tinted sun shade brings out the retro chic. Joshua says, ‘I can clearly remember how my childhood was dotted with Padminis and Ambys wearing similar shades.’ And in 1966, these very looks, this very charm drew the Krishnayyas from Boston. They came to the factory to get their Amazon.

Engine and Performance
As you would expect, the S80’s engine is pretty silent most of the time. However, it does sound very nice once you let the revs climb. And we are all guilty of burying the throttle for inordinately long periods to encourage the auto-tranny to hold revs right to the redline. Especially through various underpasses and tunnels. It isn’t a proper sportscar howl, but it does sound good. Progress is effortless as well, and really, there’s very few nits to pick. I only wish the automatic gearbox was more in step with the engine. While the automatic shifts quickly enough when you’re driving normally, when you pick up the pace, it doesn’t. Then you find shifts lagging behind a bit and kickdowns take a fraction longer than expected. Even in the sequential manual mode, especially during the performance runs, I found myself shifting as much as 500 rpm early to allow for the time the transmission would take to slot in the next ratio. The economy meter is extremely accurate, I must say and 9 kpl from a car this large is eminently acceptable, I think.

Karl promised that the Amazon was a runner and all it needed was a battery. When we opened the bonnet, the engine was buzzing already. With startled hornets, scattering spiders and some mechanical bits. Josh, Karl and his friend Kiran manfully rolled up the sleeves, hooked up the new battery, added fuel manually to the lines, prayed and cranked. Within minutes two of the four cylinders of the 90 bhp, 1778cc engine sputtered to life. The misfiring sounds accompanied by fresh bursts of hornets and spiders. As it turns out, one of the carburettors would not receive fuel thanks to a shattered fuel line.   The engine is mated to a four speed manual that Krishnayya recalls as one of the smoothest gearboxes he’d ever used and Karl endorsed that as he slipped the car in and out of gear to push it around the garden. ‘Smooth but sloppy,’ said the car bible turned bollywood dancer thrusting his hips to show us how the gearstick gyrated. Back in the ‘70’s, cruising at about 140 kph, the Amazon was one of the fastest cars on the Goa highway. ‘A pilot friend who flew the Kirloskar plane back then was the only one who could keep up with me’, added Krishnayya with a mischievious smile. As it turns out, we managed to get the engine to thrum to a short life repeatedly, but ultimately, it would take a lot more work to get it to run properly. Gutted. More than half of the Amazons ever sold, we’re told, are still running and Karl knows all the registration numbers. No, we’re kidding about that last bit. Our aim to revive another one would just have to wait.

Handling,Ride and Braking
Ride quality is the weakest link in the Volvo S80. Volvo brings the cars to India in full Euro spec. That means a plush, almost fluffy ride on good roads. But at the first hint of a pothole and the car feels uncomfortable. The higher you raise the speeds, the more this feeling grows. Around corners, the soft suspension also manifests in a sort of ‘loose’ body control, a fair bit of roll and generally, there is another car in this category that would leave a skilled driver in a S80 a bit behind on a twisty road. You get my drift? Grip levels are unquestionable, but my feeling is that the suspension settings in our reality do not allow the car to exploit it.

Handling is enjoyable as long as you’re okay about the tilts of the horizon that go with hard cornering in the S80. It isn’t especially exciting though, and if you’re an enthusiast driver, look to get hired by someone who owns a 5-series. Er, you know what I mean. The steering fits into this character. There is some feedback, but the wheel does only a little more than point the car in the direction you are aiming for.

Braking, though, is assured and authoritative. The pedal could return more feel, but I’m not sure that would be in character for this rather understated car. Plus, being a Volvo in the first place, and having airbag signs molded into every other nook and cranny are very reassuring.

There aren’t any airbag signs on the 122, though. Not that we really needed one. We resorted to pushing it about the compound for the pictures. What became evident is that the steering remains precise. Steering effort, despite standing still for more than three years, was minimal. Krishnayya says, ‘The turning radius of the Amazon is smaller than that of my Indica!’ The Amazon also happens to be extremely comfortable. It’s no surprise that he drove it all over Sweden before taking it back to Boston, and finally chose to pay a hefty 90 per cent duty (less than the 105 per cent on the S80) when he finally imported it to India. It was his runabout until he decided to buy an Indica, about three years ago.

Interiors & Features
For a car as expensive as this, the Scandinavian obsession with functional aesthetics doesn’t really work. The S80 is a nice place to be in, but it does not feel that special. Or expensive. It feels like all the materials are of high quality, like nothing will squeak or rattle in the next decade and like everything is there for a clear, unequivocal purpose. But it does not feel flashy-luxurious. Let me give you an example. You normally slot the boxy key fob into a slot in the dash and use a button to start (and stop) the motor. But here’s the thing. The slot in the dash looks like a place to store change, and the engine start button looks exactly like a calculator button. As Pablo said, ‘Engine start buttons should be circular.’ Or at least evoke the kind of emotions that go with waking up a powerful six-cylinder motor, right?

And I have to mention that criss-cross finish on the dash metal insert. It bugged both Pablo and me. That said, I absolutely loved the music system (superb bass resolution and great equaliser control).Again, the Amazon turns out to be amazing. It was the first passenger car ever to feature three-point seatbelts. The car also had bucket seats rather than the bench seat that were popular at the time. The faded tan leather upholstery is still immaculate. If it’s any indication of how the S80 will age, the S80 will be stunning. And the seat, sproingy with age, felt comfy.With leg room rivaling your own favourite couch.

The final words
No matter what I’ve said about the S80, I’d be happy to take the Volvo out for a spin whenever the opportunity presents itself. But thanks to the superb reception the bus business has received, I think the car guys are going to have an uphill climb.

Competing with brands with a preset premium image – like BMW, Audi and Mercedes-Benz – with a brand associated in India with some of the best buses is going to be an uphill battle. That the car is more expensive than the 5-Series, more understated than all of the competition is going to make Volvo’s job seriously difficult.

And what about the Amazon? For one it is really well built, and has aged fabulously. A wipe restored the chrome from grimy to shiny... that’s nearly three years of grime. Heck, she even fired up without any fuss. So we’ve got great build quality, good fit and finish, all it needs, really, is a paint job, a fuel line and a thorough oil change. But other than that the Amazon is the solution to your reliable classic runabout problem. Spares and after sales service for the 122? Well, Krishnayya has a whole spare Amazon, and our man Karl knows all the part numbers by heart, heh heh.

Mr Krishnnaya’s Amazon is up for adoption. Tons of spares along with the other car are part of the deal. Call him on +91-9890264225 for more details.