All Volvos sold in India are imported as completely built units and attract 120 per cent in various duties. Local assembly would bring duties down to 70 per cent and help the firm grow.

"We would look at ways to start local assembly. One of the ways could be through a third party, with existing infrastructure. Of course, a lot of our people will be involved in the process," said Tom Von Bonsdorff, managing director of Volvo Auto India. 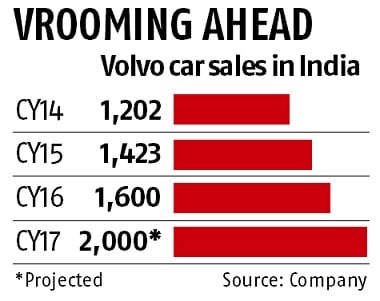 Volvo sold about 1,600 cars in India in the 2016 calendar year, growing a little more than 12 per cent to its 2015 volumes. Volumes had grown 18 per cent in 2015. The company said the first quarter of this calendar year also saw double-digit growth. "We look to accelerate it. We should hopefully do 2,000-plus this year," said Bonsdorff.

The firm competes with the German trio of Mercedes, Audi and BMW. It completes 10 years in India later this year, with cumulative sales of about 7,500 vehicles; it sells significantly less volume than the German brands. Mercedes, for instance, sold a little over 13,000 vehicles last year. The three German firms have a local manufacturing unit and, in many vehicles, enjoy a localisation of 60 per cent.

"There must be a reason why so many companies do local assembly here. It could improve margins," said Bonsdorff. "We've been able to attract customers who are probably looking for an option beside the German brands. We see us growing faster than the three."

Bonsdorff said the sustained growth in India was the best tool for him to market investments (from their headquarters) into India. Volvo, he added, was not looking at a specific volume as a threshold before deciding on investment. "I see that the spirit (at headquarters) is positive and the belief in India is growing. The firm is starting to feel very confident about India. It is analysing the right time of entry...we're lobbying with our top management to take a final decision. No decision on investment has been made but I am hopeful of it coming soon."

Volvo, he claimed, was not losing money in India, though it was still in an investment mode. "In the next five to 10 years, India will be a great profit driver for the company. We are investing but are not losing money."

Volvo has 17 dealerships and plans new ones in Lucknow and Ludhiana. "We need to be more visible. We will continue to expand our reach," said Bonsdorff.