The facelift version of Volvo S80 is finally here. Volvo India has today launched the 2014 Volvo S80 at the terminal 3 of the New Delhi Airport. The price goes as follows: The D4 variant is going to cost Rs. 41.35 Lakhs, whereas the D5 will charge 44.8 lakhs (Ex-showroom, Delhi). The Geneva Motor Show last year witnessed the exhibition of the upgraded Volvo S80, along with its updated siblings S60, and XC60. 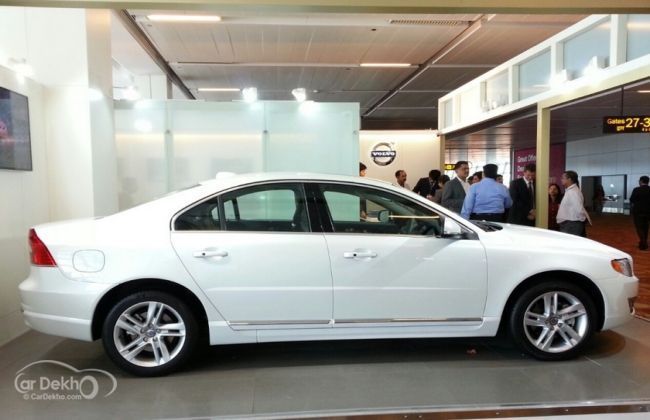 The upgraded 2014 Volvo S80 features a smaller grille as compared to the existing model. The headlamps now sport LED daytime running lights, a feature which is absent in the old S80. Besides, the bumper of the refreshed sedan has also got a little modification, while the remainder of the car profile looks identical to the existing model. The D4 variant gets a 2.0L straight-five cylinder oil burner developing 163bhp at 3500rpm and 400Nn or Torque. On the other hand, the higher end variant Volvo S80 D5 houses a 2.4L inline 5 cylinder engine that produces a similar torque, yet generates 215bhp of power at 4000rpm. The competition for the 2014 Volvo S80 are the likes of BMW 5 Series, Audi A6, Mercedes E Class and Jaguar XF