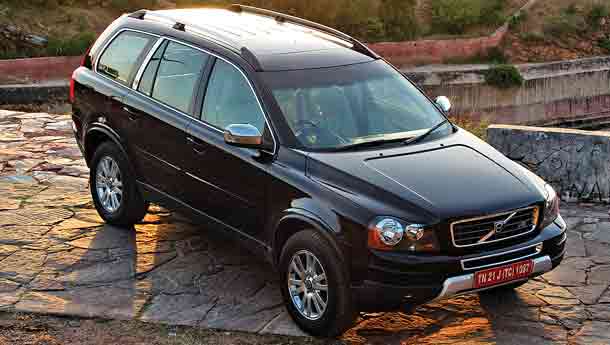 Most SUVs would tremble before taking on a near-30 degree incline, that too on smoothly paved stones that have been worn out from centuries of use. This would be a good test for the Volvo XC90 that I was piloting, I thought. The location was the Nahargarh fort in Jaipur and I wanted to take the Swedish SUV up for photographs. No problem, with a V8 under the hood, it felt like tackling Indian forts was a routine sort of thing for the XC90. With over 315 bhp and 44 kgm of torque and ably assisted by permanent all-wheel drive, the XC90 could have been an all-conquering Swede in India, had the Swedes wanted to invade us!

Well, Volvo is here anyway, and had invited us to sample their two flagship models that are already on sale in India – the XC90 SUV and the S80 sedan – on a drive between Delhi and Jaipur and around. For India, the S80 comes with three engine options – a 2400cc turbocharged five-cylinder diesel, a 3200cc inline-6 petrol and the monstrous 4400cc petrol V8. The XC90 will have the same engine options as well. Now, both the V8s here are top-of-the-line, all-options cars and so they were quite naturally my vehicles of choice from the lot. Besides, the V8s are sourced from Yamaha, my favourite motorcycle manufacturer, so how could I resist?

At Volvo, it was always function over form. But not any more. Does that mean no more boring Volvos? Yup. But their heritage of boxiness still remains amidst all those rounded-off edges. The XC90 is quite formidable to look at. But the fact is that this Volvo crossover still remains rather understated compared to other machines like the Audi Q7, Mercedes-Benz ML-Class and the BMW X5. It’s the same with the S80 too. The luxury sedan sure looks the part, as its sheer size had many heads turning. The two cars do look like siblings... well, they do share the same platform.

Get inside the XC90 and the story changes. Plush leather seats along with a plethora of buttons for adjustment ensure you arrive at a comfortable setting. The dash is very modern and is draped with wood trim. Large dials with big digital displays keep you well informed of the going-ons and a cockpit full of buttons can keep you busy all day. Entertainment must be really big with the Swedes, because the XC90 and the S80 come equipped with a DVD player, 7” screens in the head restraints and one more in the centre of the dash, 6-CD, MP3, 12 speakers, car phone, a chilled compartment and even a compass in the XC90 in case you get lost! Every single safety feature listed in the sales brochure is listed as standard. Volvo take safety to an all new level, really. For instance, their seatbelt warning system beeps to excruciating decibel levels if your seatbelt isn’t fastened.

For a saloon that will be chauffeur-driven in India, the S80’s interiors are very spacious and there is enough room at the rear to stretch your legs. Volvo has managed this by placing their engines transversely, thereby liberating more inside room. And Volvo being what they are, this also helps in better crash-worthiness. Even the SUV is built to create space inside, as all the seats, except that of the driver’s, fold down. Volvo could have given us a third row of seats in the XC90, but that’s missing as Indian homologation laws need a car to have a full-sized spare wheel. As a result, the XC90 has it’s original space saver as well as a full-sized wheel!

Now, Volvo’s V8 engines are a bit un-V8. They rumble to life but settle down to a purr instead of the usual throaty growl. But let me assure you that they are no less potent. The S80, with its 4400cc V8 mated to the refined 6-speed Geartronic box, accelerates at a blistering pace as you step on the gas, and I for one was caught unawares on more than one occasion as I snaked through traffic on certain parts of the highway. On the open road, put pedal to the metal and 315 horses graciously get to work. Mile muncher? Comfortable cruiser? Luxury sedan? The S80 can play all these roles without a fuss. On the other hand, the XC90’s cabin isolates the purr of the V8 even more. So although you expect a big battle-tank like machine to march ahead screaming and rumbling, it does so very gently, but no less swiftly. Being a crossover, the XC90 feels a lot like the sedan to drive albeit perched higher for better visibility. The Geartronic box on both cars allows you to hold the revs close to the redline without automatically shifting for you, something most enthusiasts will enjoy, but it misses the paddle-shift feature. I would have loved to have it in the sedan.

The XC90 starts at Rs 45 lakh and goes to Rs 52 lakh for the full blown V8, although prices can go higher with the optional features. The S80 starts at Rs 38 lakh and goes up to Rs 44 lakh, again optional features will be extra. But what’s interesting about both these cars is that the S80, in the BMW 5 Series, Merc E-Class league, is priced bang in the middle of the competition. So is the XC90, which is between the Pajero and the Prado at the bottom end and the ML-Class and the Q7 at the upper end of the spectrum. Their pricing strategy also seems to be safe. Well, with Volvo, that was only to be expected.