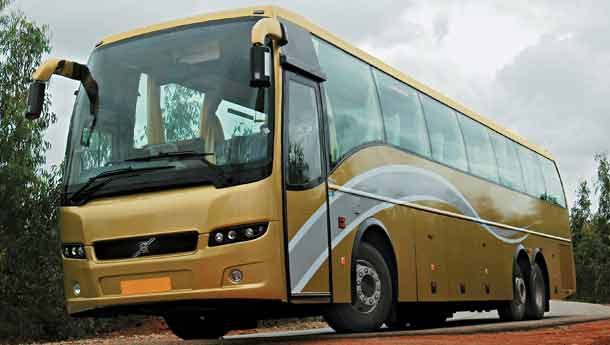 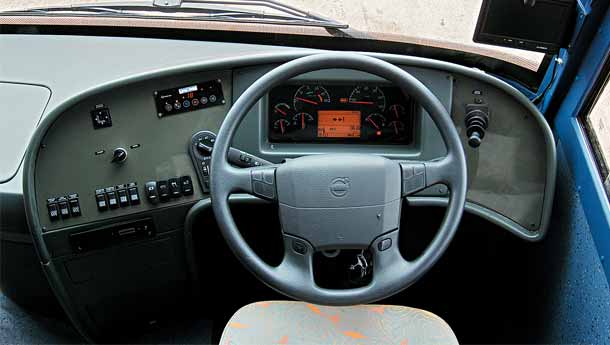 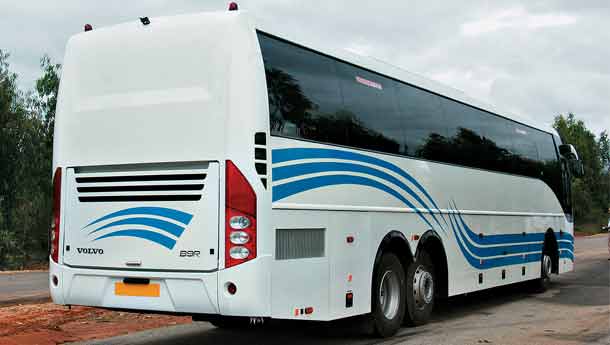 I happen to live near a couple of ‘Tours and Travels’ shops and I am accustomed to seeing scores of private buses parked by the side of the road, waiting for their passengers. Although I have seen Volga, Volva and Vologo buses, the folks sitting in the genuine rear-engined Volvo buses seem to have the broadest smiles on their faces. It appears that either they are happy to leave Mumbai or it’s something brought about by the buses they are sitting in. Ask any seasoned Mumbai-Pune traveller what his preferred mode of doing the distance is, and instantly, the word Volvo pops up – Volvo this and Volvo that. Walk to any inter-city bus stand and be ready to be heckled by touts of all shapes and sizes, screaming ‘Volvo, Pune Tayshion’ into your ears. Well, you do know by now that the Volvo B7R has proved itself many times over to passengers and bus owners alike. They are comfortable, reliable and pretty darn quick. And it’s been nearly eight years since the B7R first traversed our highways and already, these buses are given first preference by passengers who want to get to their destinations in relative comfort.

It makes sense then, if each Volvo bus could carry more passengers in a single trip, resulting in more availability of tickets, and of course better economics for the fleet owner. So the Swedish firm has introduced a gigantic new machine to supplement the B7R in the country. Ladies and gentlemen, meet the new 9400 6x2 B9R Multi-Axle Coach. Since it’s almost car-like to drive, I decided to give this story the ‘Road Test’ treatment! Here goes...

LOOKS AND DESIGN
The B9R looks more or less like a bus, and that’s not a bad thing. Wait, let me explain. Sure, it’s soft around the edges and the front has a very typical Volvo snout. But then again, styling a bus to look like a 300 SL ‘Gullwing’ isn’t really possible. Buses look the way they do because they are more products of necessity as opposed to flights of fantasy. They are built to carry as many passengers as possible and are not designed to bang past the sound barrier and so, aerodynamics aren’t immensely important in the design brief. What Volvo has done with the B9R, however, is made the boxiness of the quintessential bus seem less boxy. The bright painted graphics, the curvy windshield and the pronounced wheel arches do a lot to make the B9R seem more suave and less utilitarian and dowdy, while still retaining the practicality of a true-blooded people carrier.    The Volvo is still far superior, when compared to its competitors, in fit and finish and overall aesthetics. Park a Volvo near a Volga, and even a blind mouse will be able to make out the Swedish coach from the impostor in a blink of an eye. Then of course, you can’t mistake that rear axle for anything else. I think this is the first time we are getting two rear axles in a bus, and that too, it’s retractable.
B9R: ****

INTERIOR AND COMFORT
Stepping into the B9R and looking at the rear-most seats is like standing in Kanyakumari and trying to catch a glimpse of the Himalayas. The insides of this bus just seem to go on and on and on. The B9R seats 53, an increase of 8 seats over the B7R. The seats have recliners and the fabric is rich and much better than the green plasticky rexine most of the older Indian bus seats are covered with. The legroom is quite sufficient for most people but for six footers and plus, amputation of your lower limbs might be required. The handrests are foldable and move down out of sight and out of the way. The AC vents placed above the seats are easy to adjust and the lighting is subtle and adequate

Sitting in the driver’s throne, your view changes. The instrumentation for the driver can be easily mistaken for a sedan. An LCD screen provides information about the various systems on the bus and various switches do everything, from raising the suspension to ejecting pesky passengers out. Okay, the latter part is fictitious but if I were to buy a bus like this... And of course, the motorised rear view mirrors are a boon as no human hands can possibly reach out from within the bus and adjust them manually, unless you’re Reed Richards of the Fantastic Four.
B9R: ****

ENGINE AND PERFORMANCE
The 9-litre, six-cylinder engine puts out 340 bhp with about 166 kgm of torque. You might scoff at the ‘340 bhp’ bit, arguing that the last generation M3 puts out around 343 bhp from a 3.2-litre inline-six. Yeah, but did you notice the torque figure? The M3 seats two adults and two midgets while the B9R seats more than fifty people along with their luggage, including grandma’s walker and little Bunty’s sandbox. Torque is what buses need and, as you can see, the Volvo has plenty of that.

Expecting tyre shredding performance from a coach this size is like expecting a Sopwith Pup to do a Pugachev Cobra. Okay, if the aviation reference went, er, above your head, try this instead: it’s like getting an elephant to tap-dance. But yes, the Volvo is quick for its size. The B9R picks up speed pretty quickly and the top speed of the bus has been restricted to 100 kph, as Volvo feels that this speed is good enough for our highway conditions.

The gearshift was very, very hard. Hard to the extent of me needing the assistance of the Volvo Driver Training in-charge, Hari Babu, to help me get the cog into place. But there is an explanation due here. The bus I drove was brand new, I could even smell the paint. It does take time for any gearbox to free up and I was told that this was the case here too. I have never seen Volvo bus drivers jump off their seats and start heaving the gearshift lever into the next gear and so, I know that this explanation holds true.                                                                                    B9R: ****    RIDE AND HANDLING
Volvo buses have been best known for their ride comfort and the B9R is no different. Gone were the days when sitting over the wheel arch or the last seats of a bus meant carrying half a dozen barf bags. I purposely sat on the last seat and no, my partly digested breakfast wasn’t unsettled in the least. The ride is plush, with the eight pneumatic operated bellows ironing out all the vibes from the road imperfections and it feels like riding on air, literally in this case. The ride height is adjustable pneumatically and when set to the maximum, the speed is automatically restricted to 20 kph. With a partially retractable second axle, fuel efficiency can be improved when the coach is driven partially loaded.

Around tight curves at higher speeds, the bus tends to wallow a bit. Driving on narrow roads around bends takes some getting used to as the bus stretches to the horizon behind you. The steering is quite easy on the hands, sorry arms, as it is huge! Though you cannot look for driving precision, it does make it easy to manoeuvre the huge bulk of the B9R. While getting into turns, you have to keep the length of the bus in mind and turn only when you can’t go straight any more! I must admit, I did get the rear wheels off the road on one right hander and the otherwise patient and composed Hari Babu got a wee bit flustered but no harm was done. Whew!
B9R: ****

CONCLUSION
The transportation system in India is fast improving. Highway speeds have increased and people now want more comfortable modes of transport. Gone are the days when ramshackle buses plied our roadways, posing a danger to passengers and other vehicles alike. The B9R offers frontal collision protection and roll over protection, the latter being in compliance with a new law passed by the government. These buses, in addition to being better built, are safer and cleaner too.

And did you know that India and China now constitute almost 50 per cent of the world’s bus market? And have much more growth potential in store? No wonder Volvo is gung-ho about the country. The Swedish company has proved itself here in India with its B7R range of coaches and the once hesitant fleet owners are now heaping up orders for Volvo buses. The luxury coach is here to stay and the new Volvo B9R has reinforced that fact. With eight more seats and a mere 5-7 per cent lower fuel economy than its 4x2 sibling, the Volvo 9400 6x2 B9R Multi-axle Coach makes for sensible economics too.

Six buses have already been delivered and I guess that means I will soon get to see six more bus loads of happy, smiling people, peering through the sealed windows. Pune Tayshion, anyone?