The logo of Maruti Suzuki India Limited is seen on a glass door at a showroom in New Delhi, India. (Photo: Reuters) Higher raw material costs and lower-than-expected realisations dented an otherwise strong operating performance by Maruti Suzuki in the September quarter, though it was ahead of estimates on the profit front. The market leader in passenger vehicles continues to outperform the sector, growing its volumes by 17.5 per cent over the year-ago quarter to 492,118 units. Though the passenger vehicles sector also grew in double digits (13.4 per cent), Maruti continues to gain share. Its fiscal year-to-date market share stands at 50.5 per cent, against 47.4 per cent in FY17.


On the back of strong volume growth and a three per cent gain in realisations, the company posted a 21.8 per cent year-on-year (y-o-y) increase in revenues in the quarter to Rs 21,438 crore. Led by the new Dzire, volume growth continues to be driven mainly by the compact and utility vehicle segment. In addition to the Dzire, the compact segment also includes the top-selling Baleno, while utility vehicle sales are driven by the Brezza.


While the top line performance has been robust, this did not percolate as much as it should have to margins. While operating profits were up 21 per cent y-o-y, raw material costs rose 24 per cent and other expenses (advertising/promotion) grew 11 per cent. This led to margins coming in at 17 per cent, the same as in Q2 of FY17. Considering the spike in various costs and lower utilisation of the Gujarat plant, the company did well to maintain margins, driven by an ongoing cost reduction programme and better product mix.


The company indicated its intent of driving costs lower on the back of value engineering efforts, standardisation and localisation. Going ahead, the company will have to improve its product and volume mix, given raw material cost pressures are likely to remain, say analysts. The raw material cost basket for the company has gone up by 200 basis points (bps) over the year-ago quarter. In addition to profitability, lower other income (down 36 per cent y-o-y) as well as higher tax rates led to net profit rising just three per cent y-o-y to Rs 2,484 crore.


The company indicated that lower R&D benefits and tax breaks has led to the 300-bp rise in tax rates. A Bloomberg poll of analysts had pegged revenue at Rs 22,020 crore and net profit at Rs 2,227 crore.


The company will look to maintain the sales momentum on the back of higher demand from first time buyers, traction from government employees (20 per cent of revenues) and most importantly from the rural economy. On the products fronts, launch of the new S-Cross in October and the new Swift in February 2018, coupled with facelifts should help keep sales growth robust.

While analysts expect new products to account for half the volumes (compared to 29 per cent levels in the June quarter), how much of this reflects on the product mix and thus margins and level of discounts are critical factors to monitor. While the level of average discounts at Rs 15,200 per unit have come down, some of the gains from new products are offset by higher discounts for entry-level cars. 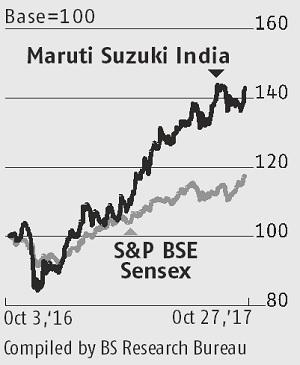