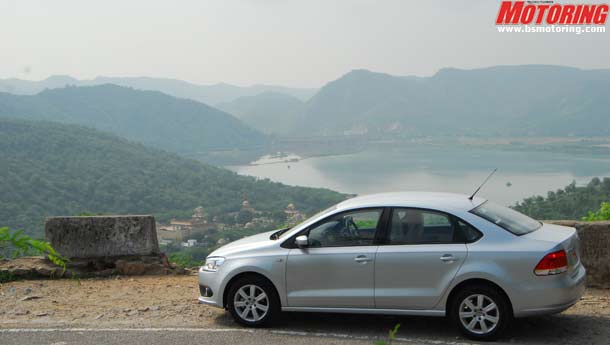 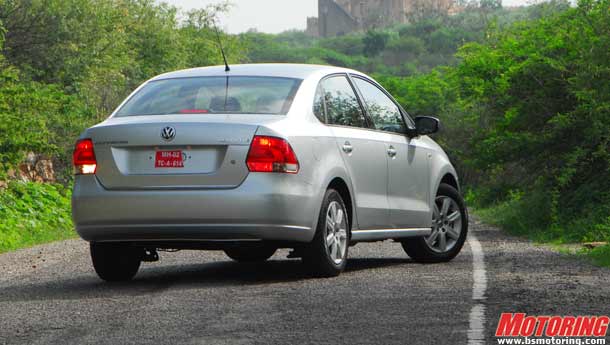 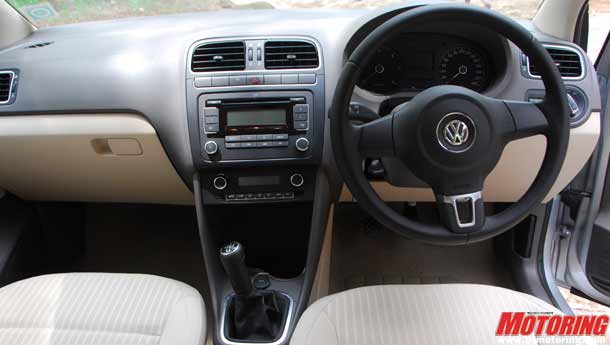 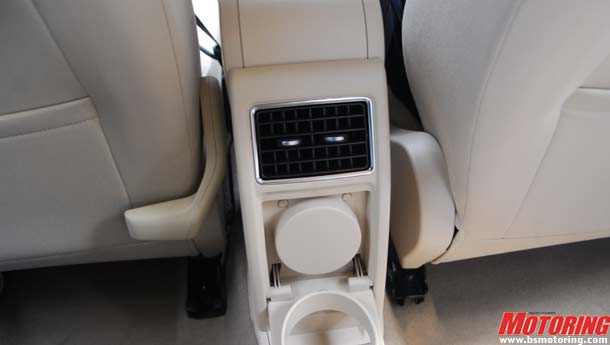 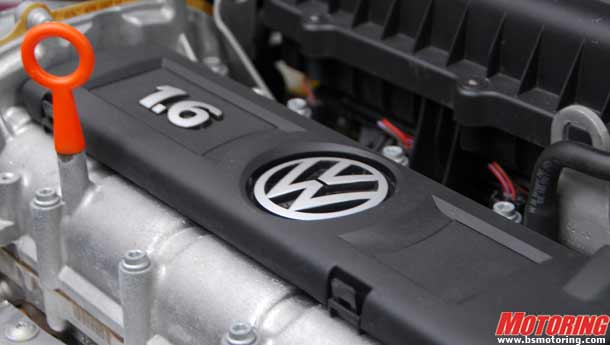 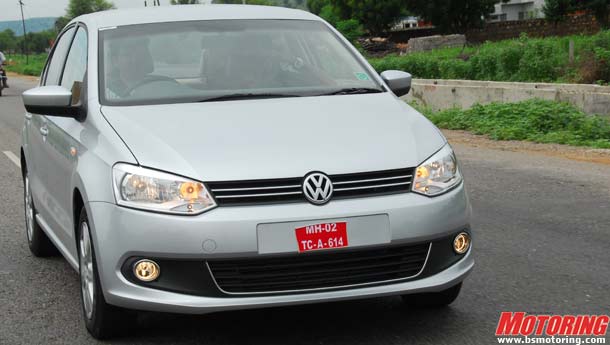 1. In the flesh, the Volkswagen Vento is a good-looking car. Like its arch rival - the Honda City - it doesn't look like a hatch with a boot added on. Its lines are crisp, making it a proper three-box car. Speaking of the boot, its very spacious, as it is quite deep.

2. The front-end looks slightly different from the Polo, especially in the treatment of the lower airdam. Perhaps VW could have modified the grille a wee bit to make it stand apart from its hatchback sibling (after all, they shouldn't make the same mistake as the Fiat Palio/Siena/Weekend). Since the Polo is a gorgeous hatchback, there is no denying the Vento's design appeal. The profile is clean yet sporty while the rear end treatment is balanced and proportionate.

3. The C-pillar treatment along with the quarter-glass is neat - whether you see it from the outside or from the inside.

4. VW India could have given the Vento the same bootlid opening as the Polo, where you depress the VW badge to release the hatch. But they decided against it because of the complexity involved in engineering it. It's a nice talking point on the Polo...   5. To increase awareness of the brand, the Vento's bootlid carries the whole Volkswagen name. It's a rather unusual thing for VW to do, but in India, the manufacturer felt the addition of the name is necessary than just keep only the logo.

6. The 185/60 R15 rubber on the Highline trim fills up the prominent wheel arches better than the 175/70 R14s on the Trendline version. Still, the 14-inchers with wheelcaps don't look all that bad.

7. The chrome accents on the Highline version are subtle. You can see them on the grille as well as surrounds of the fog lamps. A discreet strip runs along the bottom of the boot. Other differences between Highline and Trendline trims include body coloured door handles and mirrors. And Trendline gets only solid colours for the body.   SIT

1. The dash layout is unchanged from the Polo - the Vento gets a climatiser where the Polo has three knobs for the airconditioning. A few differences, especially with the Highline trim, include chrome accents on the steering wheel, AC vents and other spots, a leather wrapped steering wheel and gear knob and a rear centre armrest. Oh, there is a front armrest between the two seats as well which has a small storage area underneath.

3. The beige fabric all over the insides of the car make it a cheerful place all right, but it won't be for too long - it will attract dust and grime like moths to a flame.   4. The non-glare dashboard is good and effective.

5. Overall quality of plastics and other materials plus all the controls and switchgear are quite good, so the premium feel is there on this car. And with its surprise price, you think you have got more than your money's worth.

6. The front seats could do with some more lower back support.

7. Rear passengers can chill - the Vento has AC vents for the rear, placed between the two front seats. And they get additional reading lamps as well.   POWER

1. The Vento comes with two engine options and the petrol has an automatic gearbox option as well. The 1.6-litre four-cylinder DOHC 16-valve petrol motor develops 103.53 bhp at 5250 rpm and nearly 16 kgm of torque at 3800 revs. The engine is paired with either a five-speed manual or a six-speed automatic transmission. The 1.6-litre four-cylinder DOHC 16-valve common-rail turbocharged intercooled diesel motor also develops 103.53 bhp but it churns out 25.4 kgm of turning force between 1500 and 2500 rpm. The diesel gets only a five-speed manual.

3. We drove only the automatic variant of the petrol Vento. The petrol motor is refined and power is adequate. The engine is relaxed even at 120 kph and shows that it has got the juice. The delivery of power is smooth and makes the car driveable. However, the automatic transmission is a drag on the engine. It saps the engine of its power and a manual intervention is necessary when you want to overtake. The gearbox is lazy, even in Sports mode. And in Sports mode, it doesn't hold the revs and shifts by itself. The automatic is convenient and that's about it. As mentioned earlier, though we haven't driven the manual petrol Vento, we still think that the gearbox will do justice to the motor.

4. The diesel engine is a strong performer. Though it is noisy at start and still noisy throughout your drive, the torque it produces vindicates it. The engine, though a common-rail, sounds like a Pumpe-Duse; however credit should go to VW for managing to filter it as far as possible in an economically priced sedan. The diesel is torquey and that makes it driveable across the board - whether crawling through narrow streets or cruising on the highway. The shifts from the five-speed manual gearbox are smooth and the gearing is such that you tend to get to fifth as soon as possible - thereby getting a better average. You can hold 120 kph all day with the tacho nestling a wee bit above 2000 revs and when necessary, a dab on the pedal is good enough to propel the Vento ahead.

5.  Like with the Polo, the controls are effortless. Driving this car does not strain you even when you spend hours in it.   DRIVE

1. The underpinnings of the Vento are superbly engineered for India. At the front you get McPherson struts with stabiliser bar, while at the rear is a semi-independent trailing arm.

2. The suspension does short work of Indian roads. The suspension took abuse without complaining and managed to keep the directional stability of the car even at high speeds.

3. The ride quality of the Vento is much better than that of the Polo's. The ride quality at the back is the best in its class - it keeps the rough stuff away from intruding inside and there is barely any rebound to make you uncomfortable. Net net, it is firm without being harsh.

3. The handling prowess of the Polo platform is translated into that of the Vento. It is easily chuckable and doesn't get flustered by corners. Rapid direction changes don't affect is stability and it is very nimble. Dynamically, the Vento is brilliant.

4. The EPS setup could do with some more feedback, especially at higher speeds. VW's idea seems to be to impart comfort for the driver with its easy, light controls which is why the steering is bereft of sensation even with a big diesel engine perched at the front. It should stiffen up at higher speeds ideally, which it doesn't.

5. The brakes do their job very well. It gets discs at the front and drums at the back. Pity only the Highline gets ABS. And airbags at the front for the driver and passenger.

The Vento is a very good car. It looks nice, is built well, is spacious for passengers, has lots of room for luggage. The Highline version is well-appointed and should be the trim to opt for. The petrol motor is perky but the automatic gearbox saps its performance. The diesel is torquey and fuel efficient though a bit noisy. The ride is terrific, the suspension dismisses rough terrain and the handling is true. And with its Honda City-undercutting price, the Vento makes for an irresistible deal.