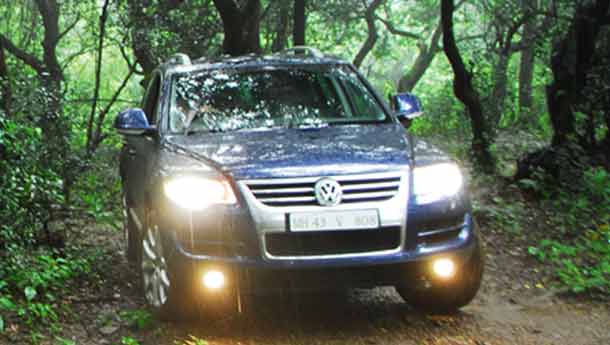 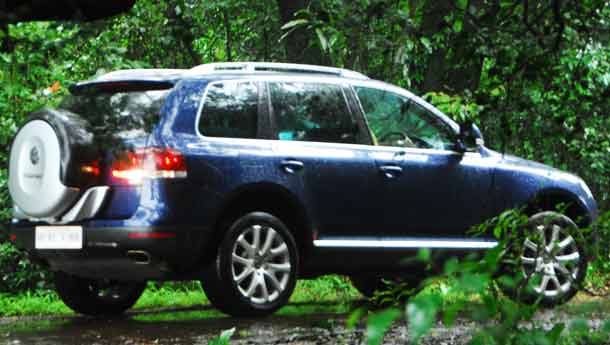 That little second-generation Clio in front of me was slightly irritating. Strict French police enforced speed limits meant I was controlling myself a little too severely in a Volkswagen Touareg – that too, not a regular version, but a model that claims to be one of the most powerful production SUVs in the world. While VW’s famous V10 TDI is one of those crazy German oilburners in the standard format, in the Touareg R50 application, it becomes a little bit mind-numbing. How does 346 bhp and over 85 kgm of torque sound? Enough to demolish the Maginot line all over again.

And here was this piddly Renault slowing the might of the German Panzer. There was light traffic on the dual carriageway between the port towns of Le Havre and Dieppe, so I reduced speed and let the Clio putter away to as much as my patience would allow. Once it became a respectable spec in the distance, I slammed the throttle pedal of the R50. A minute pause of breath, a downshift from the six-speed automatic gearbox and whoosh, it was indeed a re-enactment of what happened at the Maginot line, minus the body count. The engine makes the Touareg surge ahead like a locomotive and your body and head are pinned to the sporty seat with that funky R50-badged headrest. Can you imagine a 2.6-tonne battle tank setting a land speed record on public roads? Well, it did feel like that. The Touareg was suddenly bursting out of the Clio’s rear view mirrors, and before poor Francoise could react, I was past him and a speck on the horizon. And breaking the laws in the French countryside in a German SUV with German number-plates is about as politically incorrect as it gets. But in a bully of an automobile like this, sticking to a ridiculous 110 kph speed limit is just not done. Okay, I was careful every time I spotted an opportunity to whip that monster of a V10, but it was frankly quite tempting to abuse that abundance of torque. As somebody wiser than me said, power corrupts, and absolute power corrupts absolutely.

While I managed not to attract the attention of the gendarmerie nationale, the R50 did turn quite a few heads of the local populace. When I was stuck in a jam or passed through little towns, people’s heads turned. Cars coming in the opposite direction flashed their headlamps and even a trucker gave me the thumbs-up. The perennial question: was it me, was it the Deutschland number-plates, was it the incongruous sight of a brown Indian in a fancy set of wheels or was it the car?   None of the above actually. Later I asked a French friend of mine why, and he said that the opposite cars were warning me of a police speed check ahead. I am sure, when people looked at the Touareg, they knew that it was the sort of machine you would break speed limits in. That’s because the R50 version of the Touareg is noticeably different from the regular models. For one, it wears that unique shade of blue that characterises all performance Veedubs – yes, the so-called Biscay Blue that was first seen on the Golf R32 six years back. Then it sits on massive 21-inch ‘Omanyt’ alloy wheels and 295/35 21-inch rubber (imagine VW’s 4Motion combined with these tyres for grip!). And careful observers will notice the unique blue brake callipers, side skirts, sporty bumpers and a matte chrome radiator grille. And those lucky few who find themselves inside the R50 will love the R50 badged stainless steel pedals and the ‘engine spin’ aluminium trim that you’d find on unpainted grand prix cars of yesteryears.

However, the brightwork apart, the pièce de French résistance of the R50 Touareg of course is that award-winning diesel monster that could have easily powered some of the little towns I passed by (many seaside ones called Randomville-sur-Mer...). As I mentioned before, you get a whopping
346 bhp at 3500 rpm and 85.4 kgm of torque from as little as 2000 rpm onwards from that 4921cc V10 TDI. The all-aluminium engine with variable turbine geometry, but surprisingly featuring only two valves per cylinder, is what you’d find in a Bentley if ever you’d get diesel cars emerging from Crewe – it just goes with the brutal, head-pinning sort of personality. Even in normal guise, the V10’s 310 bhp/75 kgm is not all that bad. But thanks to some megalomaniac engineers in VW who have tweaked around the turbocharger and the engine management system, the output is up by some 35 bhp and 10 kgm. Today Dieppe, tomorrow ze whole of France... bwahahaha!

Seriously, only the battle-tank build of the Touareg somewhat reduces the impact of the V10. In a lighter car, you could possibly take-off. Despite its output, the best part of the R50 is its low speed driveability. Crawling through speed-limited built-up areas was not a problem at all, except for passing through lanes so narrow that even a 2CV would have found them claustrophobic. The engine/gearbox combination that way is very forgiving and adapts itself to the kind of inputs you give it. And when you do floor it, you can touch the 100 kph mark in just 7.4 seconds and attain a top speed of 235 kph. However, for a sporty SUV, the steering wheel is a little too over-servoed and just about tightens up when speeds increase. And the brake pedal feel is not that confidence inspiring, though I can swear those fancy blue callipers do their job.   Along with an independent double wishbone suspension setup with continuously regulated electronically controlled dampers all round, the R50 specifically features air suspension using low friction spring bellows. This ‘driving dynamics’ package combined with a lowered chassis (by 20 mm) means the Touareg offers more sporty handling. Where the regular Touareg would exhibit body roll, here, with a stiffer spring rating and adaptive roll compensation, the Touareg can be pushed that much more over curves. It feels much more planted and the sheer bulk does disappear for those few moments when you take some nice, winding turns. But these were not too frequent on the route I was driving, which made me yearn for this car on our roads.

So that begs the question: is the R50 Touareg planned for India? Volkswagen does not commit, but since the SUV is imported in the country, there’s nothing stopping you from getting yourself one. And the best part of course is that there are no gendarmes to watch out for.