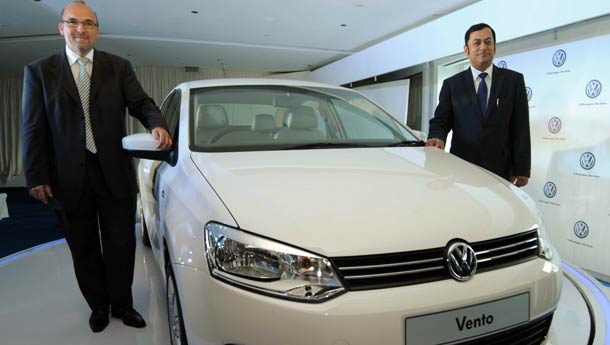 German carmaker Volkswagen today said that it is open to jointly developing products with Maruti Suzuki India, as part of its efforts to achieve synergy with Suzuki Motor Corp at the global level.

The company, which picked up 19.9 per cent stake in the Suzuki Motor Corp (SMC) for $2.5 billion last year, said that independent projects currently being pursued by the two firms in Germany and Japan are being evaluated for market suitability.

"There will be some projects which will hit the Indian market. Let's wait and see," Volkswagen (VW) management board member Christian Klingler told PTI.

"We are in the face of really exciting opportunities and we really want to come out when the projects have a certain degree of realisation. So let us give it some time," he added

He said that the partnership between VW and Suzuki is all about leveraging on each other's strengths. "Suzuki is very strong in the Asian market, including India and Japan. They have knowledge in the small car segment, which is pretty unique. They make small cars and make money. Lot of manufacturers make small cars, but they don't make money," Klingler said.

"Suzuki (also) has lot of interest on the technologies that we have," the VW board member added.

He said there would be a lot of synergy between the firms in many areas, such as utilising MSI's supplier base. "There are lot of discussions going on about synergies and one synergy could be at the suppliers' level as well," Klingler added.

Officials of MSI and VW India were understood to have met in May to explore synergies in production and vehicle design.

Klingler said that VW is also looking at increasing sourcing of components from India for its global operations.

A new entrant in India, VW is yet to gain firm ground. It had started production from its Chakan plant this year, at an investment of Rs 3,500 crore. The plant has an annual capacity of 1,10,000 cars.

In contrast, MSI is the largest brand in the country, accounting for over 55 per cent of its 15-lakh unit car market.

The Japanese company is also ramping up its R&D division by investing around Rs 1,500 crore in an upcoming centre at Rohtak, to be used for developing cars for India as well as the ASEAN region.

This would be SMC's largest R&D centre outside Japan.